Home » AO On Site – New York: PLOT/09 – 'This World & Nearer Ones' on Governors Island through the Summer

AO On Site – New York: PLOT/09 – 'This World & Nearer Ones' on Governors Island through the Summer

Currently taking place on New York’s Governors Island is “PLOT 09: This World & Nearer Ones,” a public art quadrennial produced and created by Creative Time.  Nineteen international artists were asked by curator Mark Beasley to create site-specific works responding to the particular situation of Governors Island, a 172-acre island in upper New York Bay, one half-mile from the southern tip of Manhattan.  Every Friday, Saturday and Sunday throughout the summer, a seven-minute ferry ride takes visitors to the island, where they can discover installation, performance, auditory and video projects that respond to the developing nature of Governors Island.

In his curatorial statement, Mark Beasley calls Governors Island “a modern ruin on the verge of rehabilitation.”  This characterization of the island is examined through the artworks, which engage with the island’s history.  For almost two centuries, Governors Island was a military base, home to the U.S. Army then to the Coast Guard.  In 2003, the island was returned to the city of New York, on the condition that the island be used for public benefit.  Several of the works deal explicitly with the island’s military past, and to this end make use of the various buildings constructed by the United States Military on Governors Island over several decades.  For instance, Krzystof Wodiczko’s work, entitled “Veterans’ Flame,” takes place in Fort Jay, a military fort completed in 1798.  On the southern half of the island, it is the upcoming demolition of buildings constructed after WW2 that is being addressed: Tue Greenfort’s subtly critical “Project for the New American Century” asks visitors to consider the consequences of the redevelopment of the island, as they walk past the U.S. Coast Guard residential community houses which are soon to be demolished. 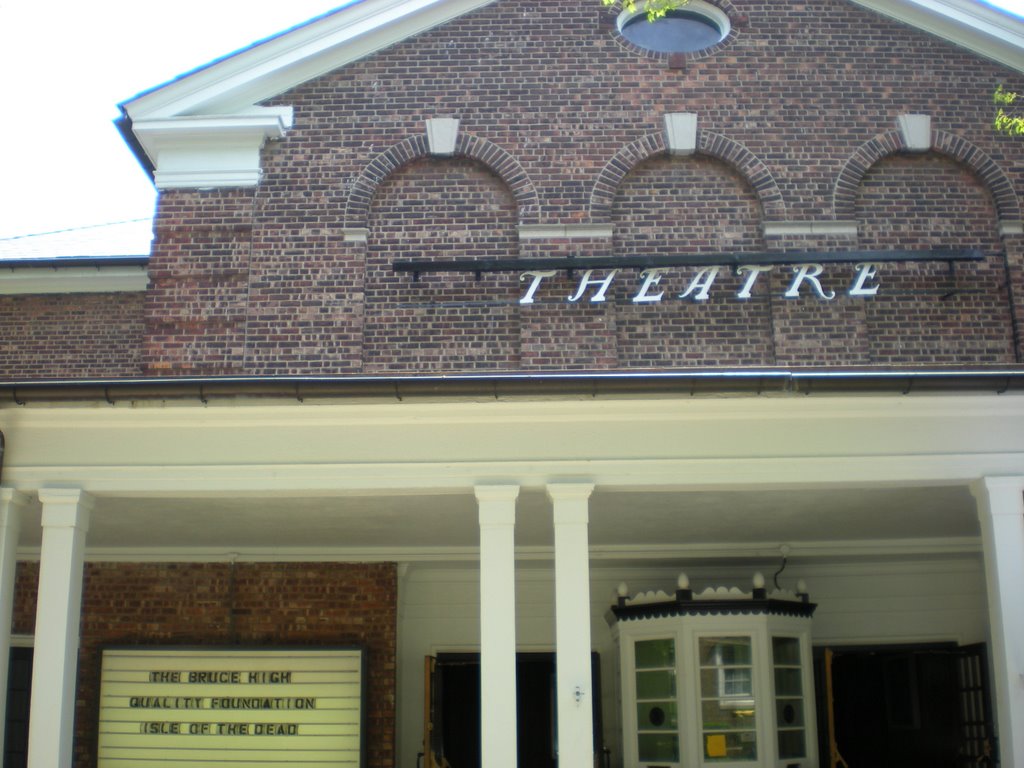 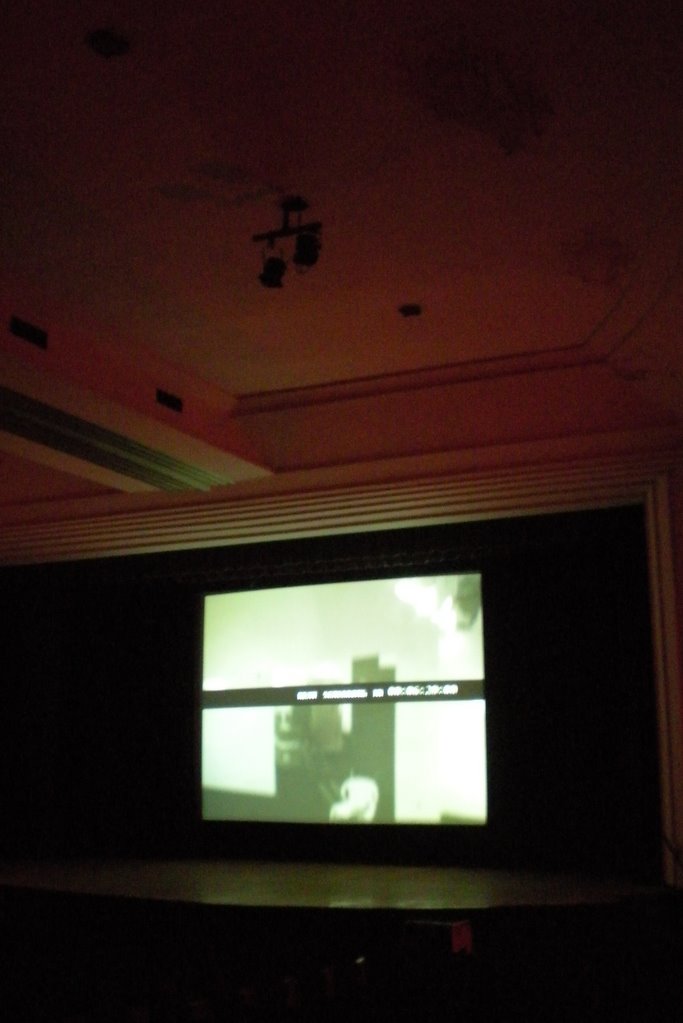 The Bruce High Quality Foundation, “Isle of the Dead.”

Governors Island has endeavored to present itself as a cultural arts destination.  One work in particular engages with Governors Island’s latest incarnation: in one of the shows most talked-about installations, “Isle of the Dead, or How I Learned to Stop Worrying and Love the Death of the Art World,” the Bruce High Quality Foundation satirizes the resurgence of Governors Island as an art destination as well as the death of the art world under the current economic duress.  The movie, which is screened in a disused movie theater, prognosticates that the New York City art world dies and rises from the dead, with zombies in search of an alternative space making their way to Governors Island, all the way into the very movie theater in which audience members are sitting. 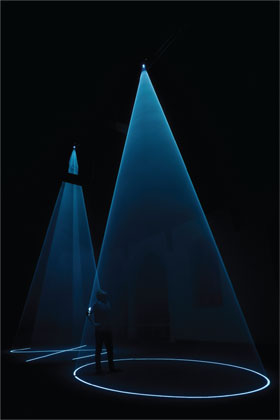 Anthony McCall, “Between You and I.” Photo via Creative Time.

“Isle of the Dead” is one of five works in PLOT/09 that reopens areas of the island that were previously off-limits to the public.  Another is Edgar Arcenaux’s “Sound Cannon Double Projection,” which takes place in abandoned military housing on Colonels Row – Arcenaux’s work consists of making the visitor experience the uncomfortable sensation created by penetrating into this deserted space.  One of the best uses of the space of Governors Island is Anthony McCall’s installation, “Between You and I” which combines video projectors with haze machines in St. Cornelius Chapel, to create ephemeral sculptural forms suspended in air, where light encounters mist.

PLOT/09 does not confine itself to the island: certain projects bridge the gap between Governors Island and Manhattan, and fully exploits the island’s unique location and its views on Staten Island, Ellis Island, and the Statue of Liberty.  Plot/09 begins as soon as a spectator boards the ferry to the island and is confronted by Mark Wallinger’s signs, reading “Goats” and “Sheep,” attached to the upper-railings.  Returning to Manhattan, Lawrence Weiner’s work becomes visible: the words “At The Same Moment,” stenciled onto the pilings besides the dock on the Manhattan side bring the experience of PLOT/09 to a close. 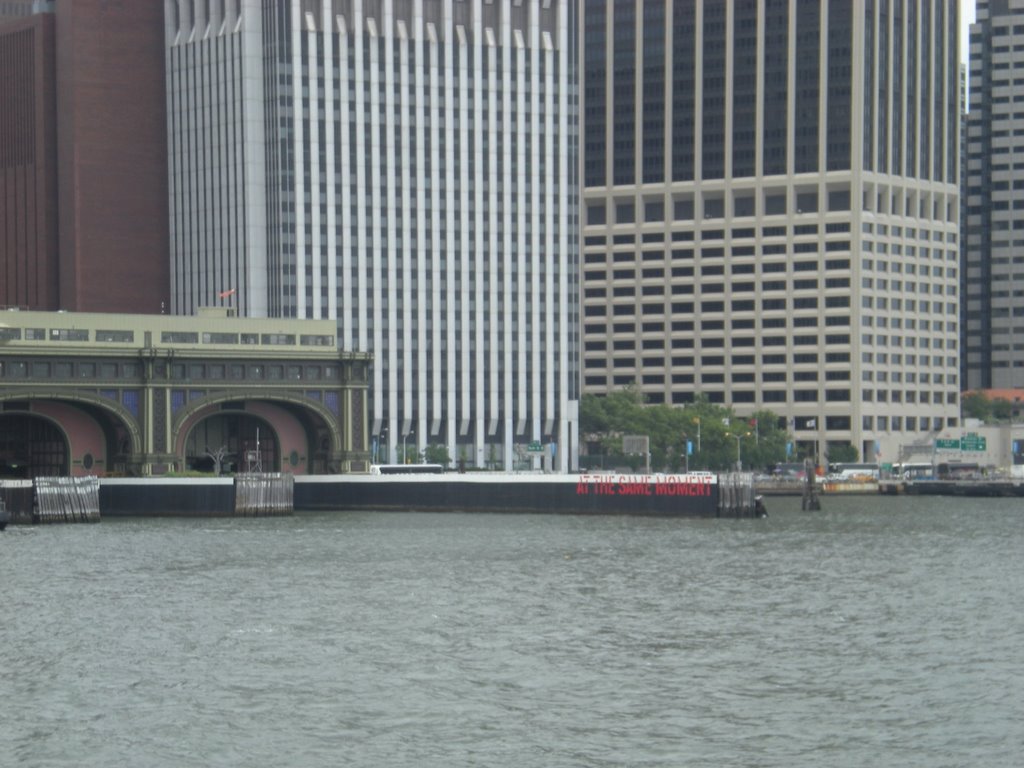 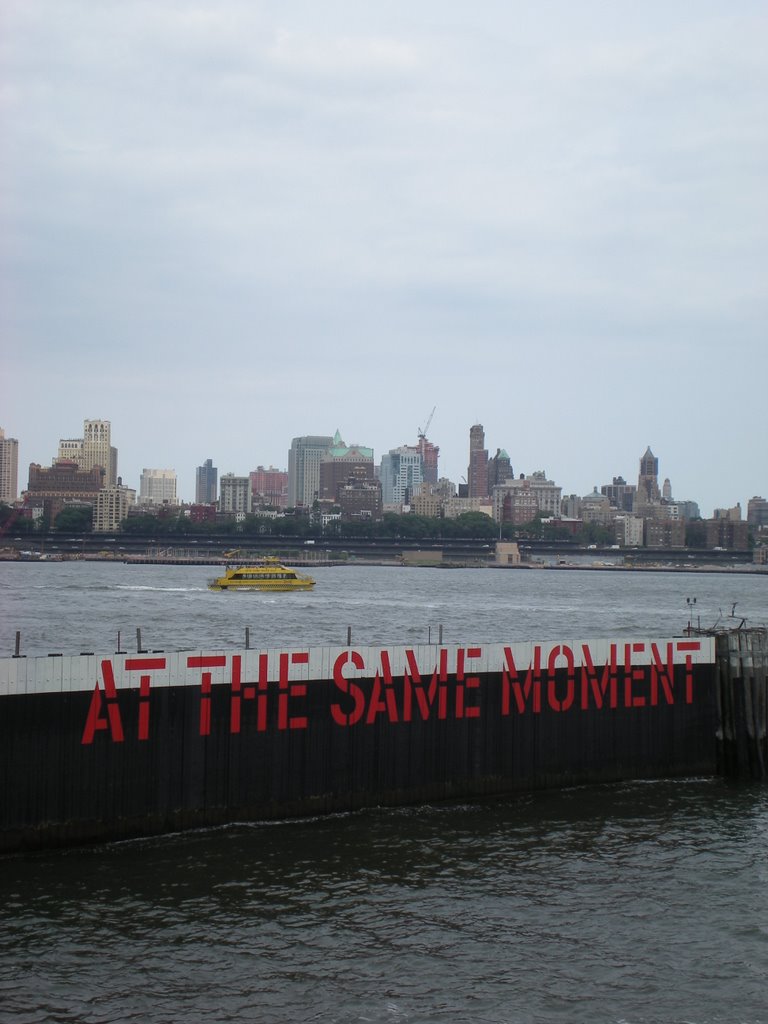 Lawrence Weiner, “At The Same Moment.”

- All Photos by Art Observed unless otherwise noted.

Tax brackets on cigarettes to be adjusted.(Business)

Manila Bulletin September 21, 2004 Government economic managers have agreed to retain the price brackets on cigarettes and only the tax brackets would be adjusted according for simplier and easier tax administration.

A source said this was based on the proposal of Trade and Industry Secretary Cesar V. Purisima.

There was no decision, however, whether the increase in the excise tax would be uniform across all four tiers or not.

At present, cigarettes are being taxed based on four price categories low, medium, high and premium.

This government position is in line with the position of Philip Morris Philippines Manufacturing Corp.

PMPMI is proposing a retention of the present four tiers R1 increase across all tiers to enable the government to generate revenues of up to R4.50 billion a year.

“Increasing the rules by percentages would result in huge increases in the top tiers because of the higher tax base. This will result to dramatic market distortions that would ultimately result in lower than target revenues such as what happened in France and Germany, PMPMPI spokesperson Dave Gomez said. web site 2012 tax brackets

According to Gomez, growth in the local cigarette industry has been driven by the low tax tier which limits government tax revenue.

In a statement, PMPMI managing director Chris Nelson said the company supports fair and moderate increases in the excise tax for cigarettes that would address the concerns of both the government and entire tobacco industry.

On the other hand, low and medium-priced cigarette makers Anglo American Tobacco Corp. and Fortune Tobacco are pushing for a shift to ad valorem system.

But PMPMI said Congress should carefully study the proposal from other cigarette manufacturers to shift to the ad valorem system and took exception to charges that the companys proposal would effectively “kill low and medium priced-brands.

On the proposed shift to ad valorem, Gomez said Bureau of Internal Revenue figures would show that cigarette excise tax collections dramatically jumped by almost R2 billion when the government shifted from ad valorem to specific in 1997.

Gomez said they have a stake too in the low and medium-priced segments of the market having brought the low-priced trademarks of Sterling Tobacco Corp. For close to a billion peso last year.

Gomez said cigarette manufacturers should accept that tax increases are likely to help government address its fiscal crisis and they should be ready to absorb the increases uniformly. (BCM)

This entry was posted on Thursday, July 16th, 2009 at 12:22 pm and is filed under AO On Site. You can follow any responses to this entry through the RSS 2.0 feed. You can leave a response, or trackback from your own site.