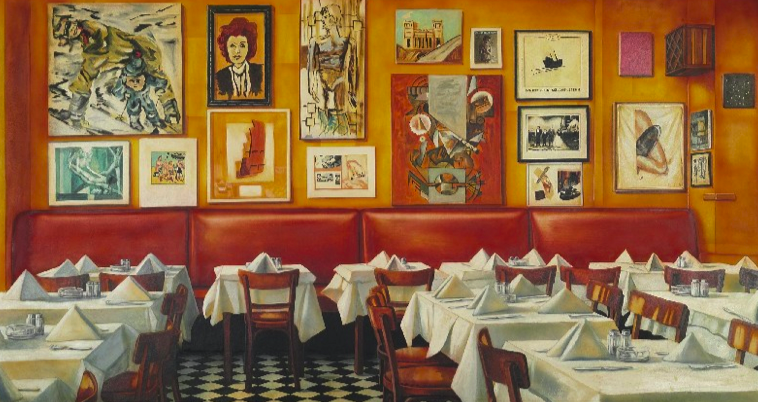 To celebrate Frieze Art Fair, currently underway in London’s Regent’s Park, Christie’s auction house held a series of auctions selling Post-War and Contemporary Art – the most notable of which occurred last night, October 16, and saw many record-breaking sales. The presale estimate for the evening auction was £6.8 million and in the end all but 1 of the 25 contemporary works sold, totaling £11.2 million.  It is of course relevant to note that the totals are down incredibly from last year’s estimates of  £57.8 million – £75.6 million for Christie’s Contemporary Art Evening Sale in London on Sunday, October 19th of last year.  That said, the leading highlights included significant works by Peter Doig, Martin Kippenberger, Damien Hirst, Gerhard Richter, Neo Rauch, Dash Snow, Pino Pascali and a rare, early rediscovered drawing by Lucian Freud. All sale totals stated in this article include buyer’s premiums and come directly from Christie’s official website or courtesy of The Baer Faxt. 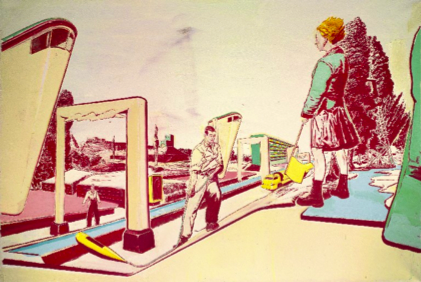 One of the greatest successes of the show was the double-estimate sale of Stellwerk by Neo Rauch which went for £892,450. Executed in 1999, the vast panoramic canvas of Stellwerk represents one of the artist’s greatest and most direct musings on the fall of the Berlin Wall. As one of the most important painters working today, Rauch’s originated in Leipzig, East Germany and subsequently developed as an artist after the fall of the Wall.  His paintings in part speak about the unification of the two opposing principles which have defined the entire twentieth century, Communism and Capitalism.

Pigeons, Luc Tuymans bought by the Ropac Gallery for £385,250

Since Martin Kippenberger’s untimely death at the age of 44, his reputation as one of the most
influential Post-War artists has continued to grow. This has most recently been recognized by major Retrospectives at Tate London, MOCA, Los Angeles and MoMA, New York. At this auction Christie’s had two of Kippenberger’s larger works for sale; Paris Bar and Kellner Des (Waiter Of).

Paris Bar is an almost life-size work, measuring over 2 metres by 3.8 metres, depicting the interior of what became Kippenberger’s second home and a site synonymous with his name – his friend Michel Würthle’s ‘Paris Bar’ in Berlin. The Paris Bar was Berlin’s cultural hub and other notable visitors included David Bowie, Iggy Pop and Andy Warhol. Paris Bar hung in the restaurant for 13 years since the year of its completion and was recently returned to its original home in a preview exhibition organized by Christie’s. Paris Bar sold for a phenomenal £2,281,250 to a telephone bidder after a fierce bidding war between the German collector Ingrid Goetz, New York dealers Jeffrey Deitch and Tony Shafrazi and three telephones; this sale price is over £1 million more than the original estimate.

The second Kippenberger, on offer Kellner Des…(Waiter Of…) also much outdid its original estimate of  £500,000 – £700,000 when Jeffrey Deitch outdid his competition and settled on £1,105,250.  Kellner Des… is one of the only examples of a painting by Martin Kippenberger featuring one of his most celebrated recurring motifs: the Laterne an Betrunkene, or ‘Streetlamp for Drunks’. Although he made many celebrated sculptures, photographs, posters and drawings on the subject, very few paintings of the streetlamps exist, particularly on this almost life-size scale. 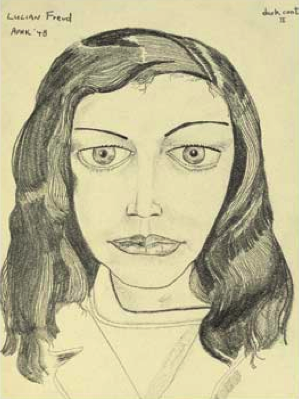 A particular highlight at the auction was the sale of a previously unrecorded drawing by Lucien Freud, Dark Coat II. As an early work of the artist’s, it was painted in 1948, Dark Coat II is a very rare and therefore special piece. It greatly exceeded its estimated worth – £100,000 to £150,000 and sold for £199,250. 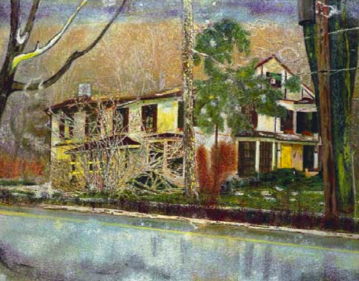 Christie’s is responsible for two of the highest auction prices for the work of Peter Doig: in May 2009 at Christie’s New York, Night Fishing, 1991, sold for $4.7 million and in June 2009 in London, Night Playground, 1997-98, realized £3 million. And so, it was greatly anticipated that Pine House (Rooms for Rent) would fetch an equally impressive price when it was brought for auction to Christie’s, New York in November last year. When it failed to reach its low estimate of $4.5 million in November it was held by the auction house and yesterday it sold to a lone telephone bid of £1.4 million pounds, below the estimate of £1.3 million.

Damien Hirst‘s iconic Maxwell’s was bought by Alberto Mugrabi for £115,250; Mugrabi’s father, Jose, had bought Hirst’s Retribution at Sotheby’s Contemporary Auction earlier that day. Maxwell’s, along with I Miss You, each formed part of one of the most high-profile art installations of the 1990s: Hirst’s Pharmacy restaurant in London’s Notting Hill.

This entry was posted on Saturday, October 17th, 2009 at 8:39 pm and is filed under Art News. You can follow any responses to this entry through the RSS 2.0 feed. You can leave a response, or trackback from your own site.