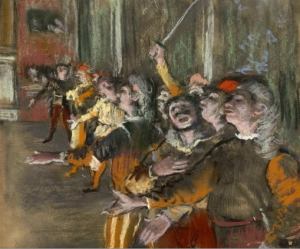 A valuable pastel by the 19th century Impressionist painter, Edgar Degas (b. Paris, 1834; d. 1917) was discovered missing from the Cantini Museum in Marseille, France, Thursday, December 31. The stolen piece, Les Choristes (also referred to as Les Figurants), measures 27cm by 32cm, and was on loan from the Musée d’Orsay, Paris for an exhibition showcasing twenty Degas works portraying a common theatre theme. It depicts a line of male choir singers preparing for a stage performance. While a museum guard was arrested on Friday in connection with the overnight heist, further investigation is pending and the suspect has been subsequently released. Authorities are continuing to examine CCTV footage in order to ascertain whether or not museum insiders or intruders can be blamed for the theft. Jacques Dallest, a prosecutor leading the case, reports no apparent signs of a break-in and that the pastel appears to have been unscrewed from the wall. Rumors of the work’s value were circulating at upwards of $30 million. However, authorities have since corrected this lofty estimation to assert the pastel’s actual value at £800,000 or $1.14 million. 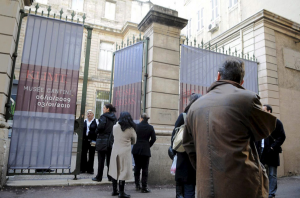 Exterior of the Cantini Museum as police investigate the missing Les Choristes, via Art Daily

Coinciding with the disappearance of a private collection, including Picassos and Rousseaus, from a private villa in the south of France, the Degas heist constitutes the second major art theft of this week. 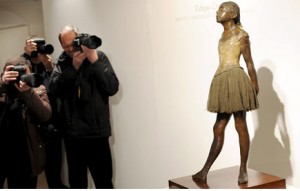 Earlier this year, Degas’s bronze sculpture of a ballerina, Petite Danseuse de Quatorze Ans, fetched a record £13.3 million to become the highlight of a recent Sotheby’s auction in London. His iconic renderings of dancers consistently claim top bids at notable auctions, including the Impressionist and Modern sale at Christie’s in November. 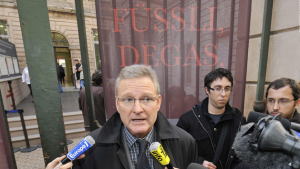 Deputy mayor Daniel Hermann speaks to journalists outside the gates of the Cantini Museum in Marseille, France, via CNN

This entry was posted on Saturday, January 2nd, 2010 at 2:44 pm and is filed under Art News. You can follow any responses to this entry through the RSS 2.0 feed. You can leave a response, or trackback from your own site.