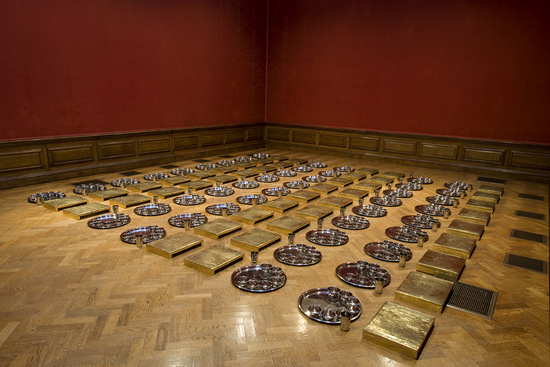 More images and text after the jump….

Fragment of the installation

A signature domestic life–related piece for Gupta, School also contains a note of highly personal significance for the artist – the stools are cast from the seat used by Gupta’s father and the brass version carries his initials. Removing this traditional object from its original environment and multiplying it, Gupta creates a powerful metaphor for the private realm as an indispensable component to the cultural, social and economic development in every society. ‘School” is a Gupta’s second show at Hauser and Wirth.  It follows the success of the exhibition of October 2009 “Common Man”, which debuted his humorous sculptural tribute to the artist’s empirical mentor Marcel Duchamp.  The exhibition is on view until March 27, 2010.

Subodh Gupta (b. 1964) is a contemporary Indian artist, best known for incorporating the objects of everyday use, such as lunch boxes, bicycle spare parts, utensils to create sculptures reflective of India’s economic and social development as well as the artist’s own past. Gupta received his BFA from College of Arts & Crafts, Patna, India.  He lives and works in New Dehli.  “The Damien Hirst of Dehli” as The Guardian called Gupta, speaks about his works: “All these things were part of the way I grew up. They are used in the rituals and ceremonies that were party of my childhood. Indians either remember them from their youth, or they want to remember them.” And: “I am the idol thief. I steal from the drama of Hindu life. And from the kitchen – these pots, they are like stolen gods, smuggled out of the country. Hindu kitchens are as important as prayer rooms”.

Relevant Links:
The artist’s page at Hauser and Wirth Gallery  [Hauser and Wirth]
The Damien Hirst of Dehli [Guardian]
The Art of Subodh Gupta [WhiteWall Magazine]

This entry was posted on Sunday, March 7th, 2010 at 2:00 am and is filed under Art News. You can follow any responses to this entry through the RSS 2.0 feed. You can leave a response, or trackback from your own site.