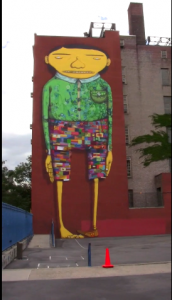 Os Gêmeos, The Giant Project, 2010. All images by Art Observed

According to their website, “The project was organized by Allen Benedikt (from AKANYC and 12ozProphet.com) with support from the artists, AKANYC, Montana Colors, and the Nike World Basketball Festival.”

More images, text, and story after the jump. 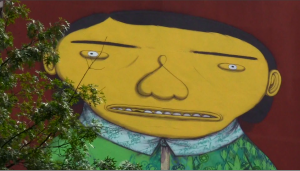 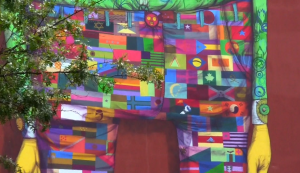 An important purpose of the mural is to promote a message of international unity. From Chelsea, the duo shares their trademark yellow character, “Gigante” with all of New York, as they have done in Greece, Holland, Lisbon, London and San Paulo. In this mural, “Gigante” wears shorts that feature colorful flags from countries around the world. The flags are painted in non-traditional colors to suggest the idea of “Unity, a world without borders, combined to form ‘one world one voice,’ without distinction to language or race…” [Os Gêmeos] 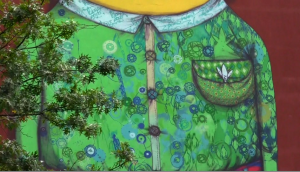 Os Gêmeos’ collaboration with Futura2000, a New York City pop-culture icon, was a crucial aspect of the project’s realization. The challenge was to prove that two completely different styles could be combined to create a united and harmonious work. Futura’s art is featured within parts of Os Gêmeos’ overall design, but his signature style is particularly evident in the pattern of the shirt. Benedikt believes that the collaboration between Futura and Os Gêmeos proves that “There is a symbiotic relationship between their aesthetics and that is the true essence of collaboration.” 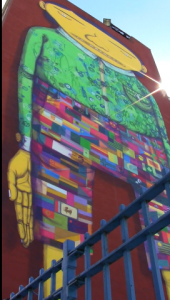 In choosing a public wall over a private or more commercial space, the mural is a gift to the students of P.S. 11 and the neighboring community. Furthermore, it serves as a testament to the emerging dialogue between artists and the city of New York. A growing number of local and international artists are working with the city to create mural series’ that will inspire and enrich creative communities.

This entry was posted on Tuesday, September 14th, 2010 at 12:04 am and is filed under AO On Site. You can follow any responses to this entry through the RSS 2.0 feed. You can leave a response, or trackback from your own site.