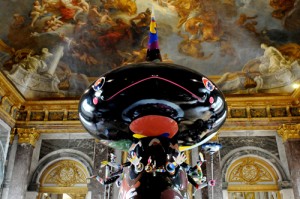 Tongari- Kun in the Salon de Hercule at the Chateau de Versailles, via Artinfo

Currently on view at the Château de Versailles are works by renowned Japanese Pop artist Takashi Murakami. The internationally celebrated contemporary artist exhibits 22 works throughout the Palace and the gardens, including 11 pieces created specifically for the exhibition. The show follows the international success of Jeff Koons, who exhibited at the Palace in 2008, and French Pop artist Xavier Veilhan, who created site-specific works at Versailles in 2009. 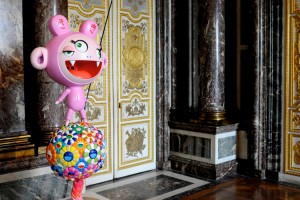 Kaikai & Kiki in the Salon de Venus at the Chateau de Versailles, via Artinfo 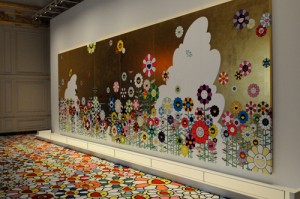 Kawaii- Vacances, Summer Vacation in the Kingdom of the Golden and Untitled Carpet in the Salle des Gardes du Roi at the Chateau de Versailles by Takashi Murakami, via Artinfo

A walk through the Murakami-Versailles exhibition offers a wonderland of the artist’s creations, which are partially inspired by pop art and Japanese manga cartoons. The placement of his technical masterpieces within the Palace’s ornate 17th century architecture creates a seemingly fairytale-like experience: Murakami’s figures appear almost in dialogue with the allegories and myths which decorate the walls of Versailles. 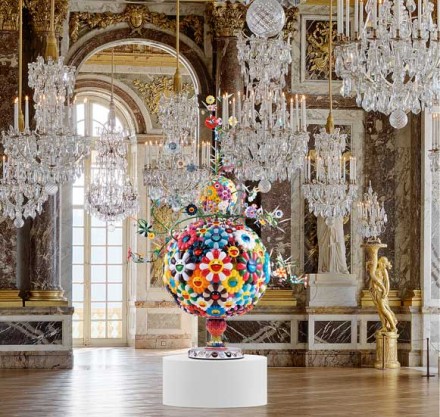 The exhibition provides a remarkable occasion to connect the artists of the past with artists of the present. The presentation of Murakami’s work offers a new way to perceive this historical monument; his creations reflect upon of the our current moment in the history of art. The installation has not been without  protest from traditional supporters of Versailles. Despite the controversy, the exhibition offers visitors a unique opportunity to marvel at the novelty of Murakami’s art while appreciating the beauty of Versailles’ historical legacy. 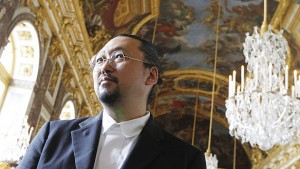 Murakami has contemplated the historical importance of Versailles by displaying his works within spaces that will retain a certain artistic dialogue between past and present:

“For a Japanese like me, the Château de Versailles is one of the greatest symbols of Western history. It is the emblem of an ambition for elegance, sophistication and art that most of us can only dream of… But, in many respects, everything is transmitted to us as a fantastic tale coming from a very distant kingdom. Just as the French people find it hard to recreate in their minds an accurate image of the Samurai period, the history of this palace has become diminished for us in reality. So it is probable that the Versailles of my imagination corresponds to an exaggeration and a transformation in my mind so that it has become a kind of completely separate and unreal world. That is what I have tried to depict in this exhibition. I am the Cheshire cat that welcomes Alice and Wonderland with its diabolic smile, and chatters away as she wanders around the Château. With a broad smile I invite you all to discover the Wonderland of Versailles.”

A walk through Versailles with Murakami’s imaginative creations is an ephemeral treat and a special sensory experience.

This entry was posted on Saturday, September 18th, 2010 at 1:00 am and is filed under Go See. You can follow any responses to this entry through the RSS 2.0 feed. You can leave a response, or trackback from your own site.

One Response to “Go See-Versailles: Takashi Murakami at the Château de Versailles through December 12th, 2010”