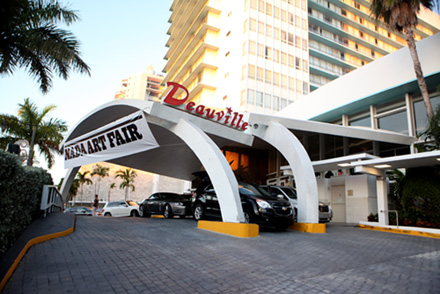 While satellite fairs have sprung up rapidly around Art Basel Miami over the past eight years, it’s no secret the past few years of recession have been challenging; this year, there’s 14 fairs compared to 17 last year. On top of that, recession or no recession, it is a consistent challenge for each satellite in Miami to carve out its own distinct identity and legacy, while at the same time maintaining a steady stream of foot traffic and buyer interest, all within the frenetic week when art world flocks down to the sunshine state. Therefore, many were skeptical last year when New Art Dealers Alliance (NADA) Art Fair, known for displaying up-and-coming, emerging artists, relocated from the Wynwood district – a district similarly jam-packed with similarly cutting edge art exhibits during Basel week – to the large yet a bit off the path location, the Hotel Deauville, roughly 50 blocks North of the main fair. However, in its second year at this locale, while some growing pains (intermittent internet proved painful for many gallerists this year), NADA has truly blossomed and matured into a must-see destination.

The Hole’s, Meghan Coleman and Kathy Grayson at their booth: 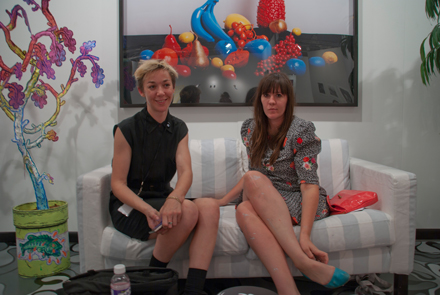 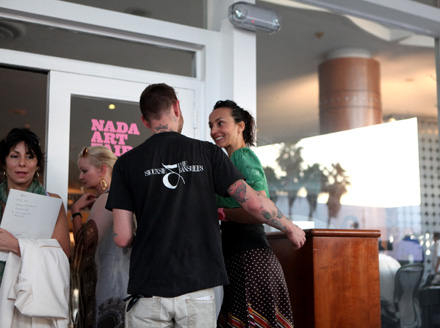 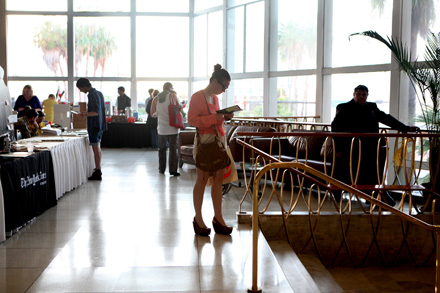 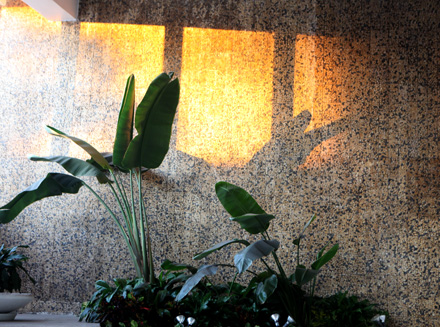 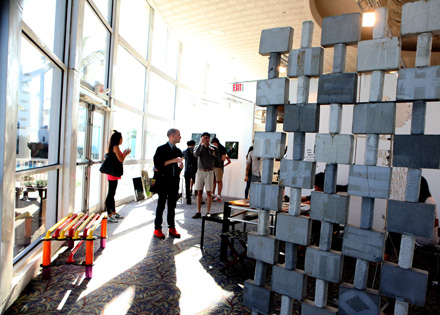 Since moving to the new venue, NADA has collaborated with 7 For Mankind Jeans, presenting a $7,000 Best Booth prize for exhibitors, a fun way to spur excitement from both exhibitors and visitors. Judged by curator Shamin Momin, ARTINFO’s Andrew Goldstein, and W magazine features director Armand Limnande, this year’s “Best Booth” prize went to two up-and-coming galleries on opposite coasts. The first was New York’s Kate Werble’s two-year-old gallery, (only featured for the first time at NADA last year), which consisted of artists Christopher Chiapa, Gareth Long and John Lehr, Molly Smith, Sarah E. Wood, and one newcomer, Ryan Reggiani, who designed an all black floor piece out of black-painted birch, “Untitled (Art for the Floor).”  Said Kate, “The whole piece can function as a floor and be hung on the wall. So at the end of the fair, the concept is that it records this idea of the art fair and the problem that exists – which is that you actually have to think about the space as a booth, more than just the art work: the floor, the ceiling, how things hang.” 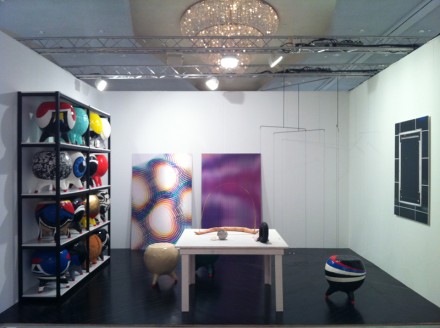 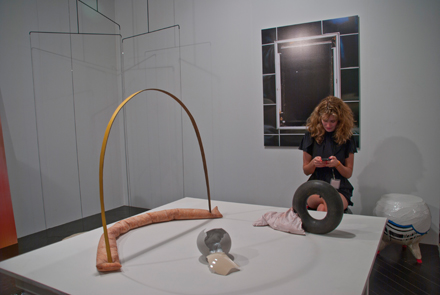 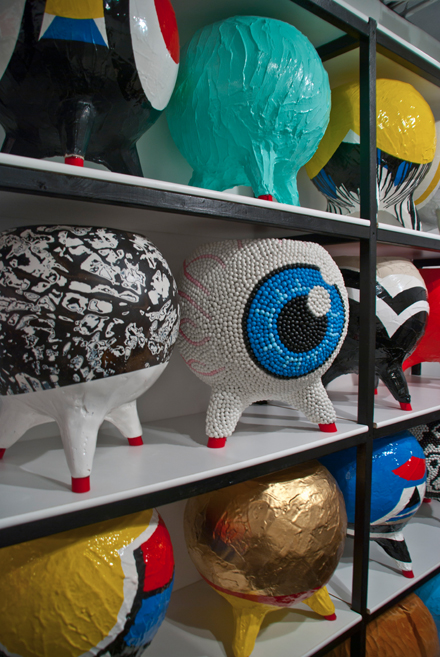 In addition, L.A.’s  Francois Ghebaly won best Solo Booth, featuring quirky, devil-may-care artist Joel Kyack (including a self-portrait of his teeth next to that of a shark, and a several foot-long sub sculpture with streams of white water running down it like mayo. His motto? “Design a Future or F*ck It!” 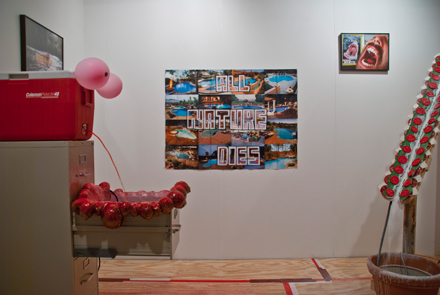 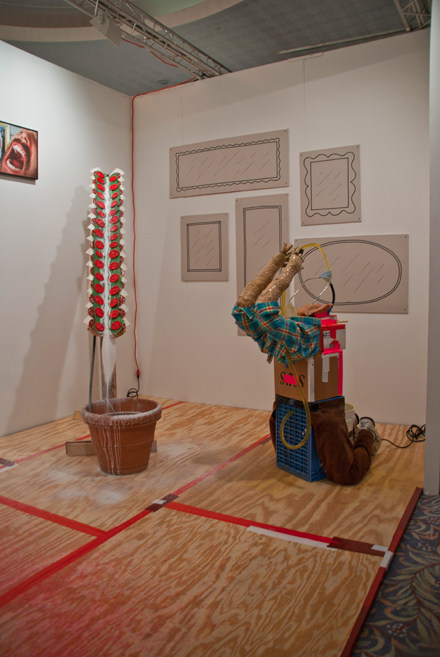 A cute, coincidental NADA tidbit was told to us by Kate Werble: Last year, Francoise and Kate were placed across from each other in the solo booth section, where they met for the first time.  Since they liked each other’s programs, they decided to do an artist exchange, in which each would host three of the other gallerists’ artists.  In the spring, three of Francoise’s artists presented at Kate’s gallery, and this coming February, three of Kate’s artists will show in Francoise’s LA space. (*NOTE: The judges didn’t know that Kate and Francoise had met at NADA and were collaborators when they selected their booths to win.) 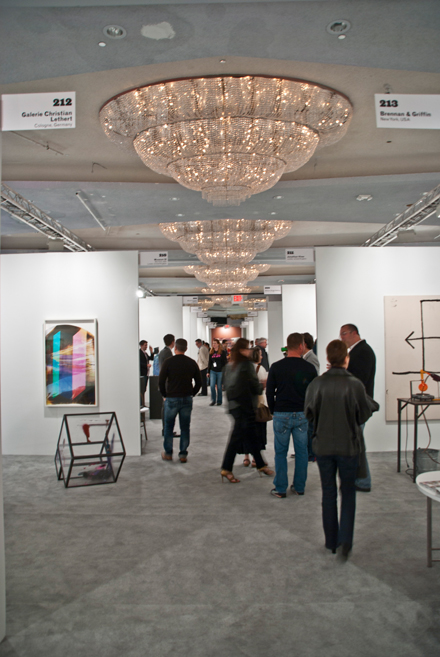 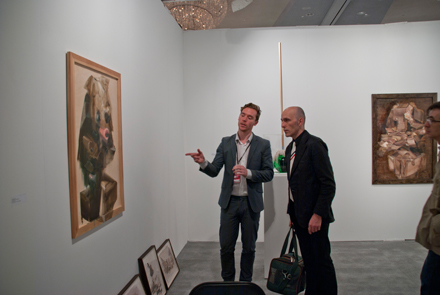 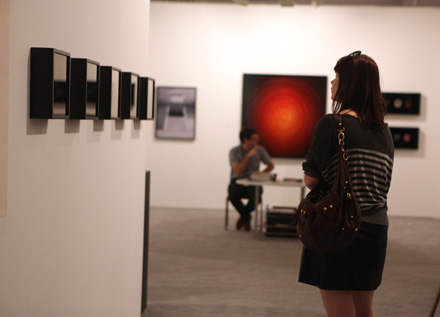 Another visit-worthy booth was The Hole. Many have been attentive to the output of this new gallery, which was opened by former Dietch Projects directors, Kathy Grayson and Meghan Coleman, after Jeffrey Deitch made his game-changing move to run MOCA in LA; featuring a handful of former Deitch artists, it has been eyed as an up-and-coming Deitch replacement of sorts. True to form, The Hole’s NADA space reflected a creative spunk and creativity of which which Deitch would be proud. Said Meaghan, “We wanted to make an arted apartment. That’s why we have a floor, a wallpaper, couch…” Each day, they changed the layout of the room, including a Taylor McKimens tree, and a neon Ben Jones bench.  “People are coming here to buy art for themselves, so you might as well show them what it is going to look like in their house. We want people to live with the piece. You’re living the art in a sense.” Added Kathy Grayson, “The general approach is just to emphasize that young artists are making lots of things besides sculpture and painting; they’re making design objects, furniture, weird sculpture, and so we wanted to just activate it and show what living with art like this would look like.” 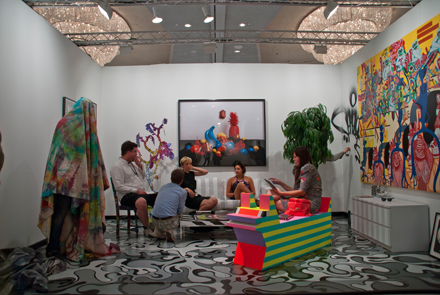 Other highlights: San Francisco’s Silverman Gallery boasted impressive work by up-and-comer Matt Lipps (which quickly sold out) and Ambich and Rice displayed whimsical cutouts juxtaposing different tourist-shot photos of famous places by Abigail Reynolds. Ramiken Crucible had colorful canvases by Nolan Hendrickson, and Museum 52 showed impressive, minimalist cubed sculptures by Sarah Braman. Lastly, Chiharu Shiota’s incredible staircase seemingly floating and ensnared in black wool thread was dense and dark, yet breathtakingly ornate and oddly ethereal.  In addition, attendees could leisurely sip coffee overlooking the coast and palm trees, or watch videos by Daniel Silvo, Basim Magdy and Alexa Gerrity amongst others, and handful of live performance pieces (Rancourt/Yalsuk, Aaron GM, Tom Holmes, Nicholas Buffon) in a separate screening room off the side of the fair. Bottom line, for seeing art for art’s sake, and predicatively gaming who will be the new superstars in the coming years at the main fair, there was no better venue than NADA this year. 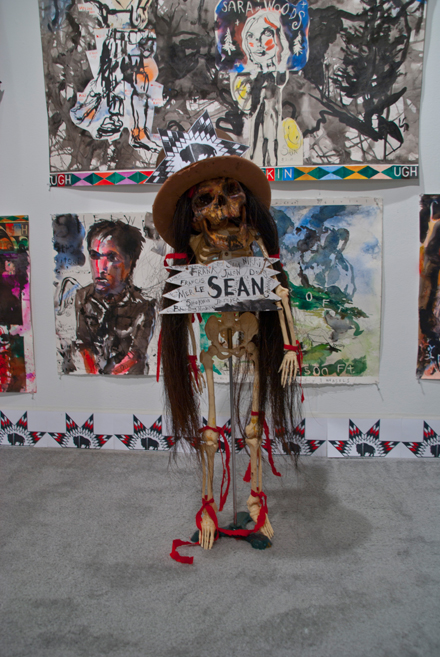 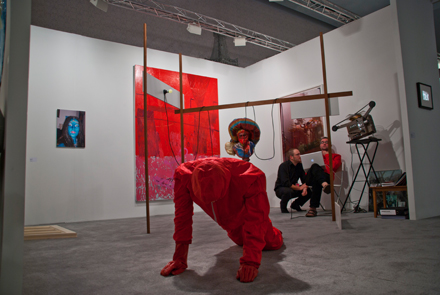 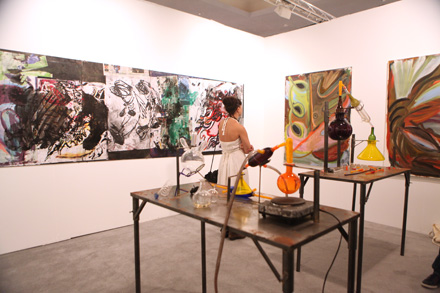 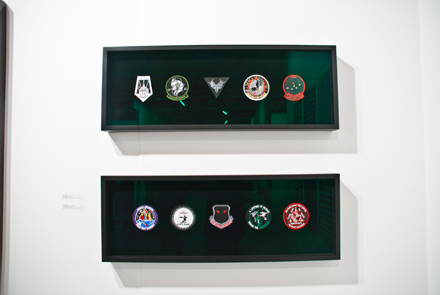 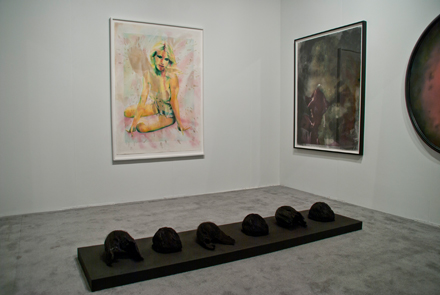 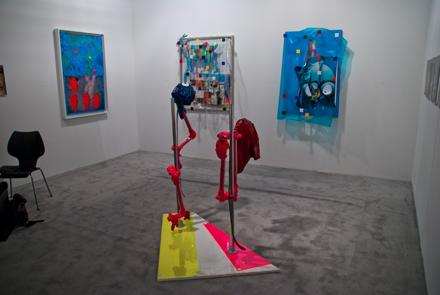 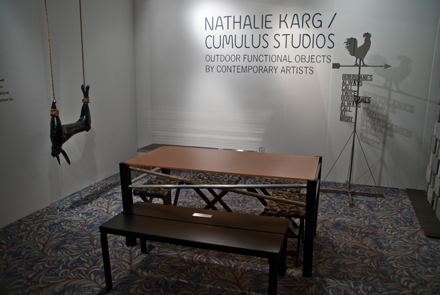 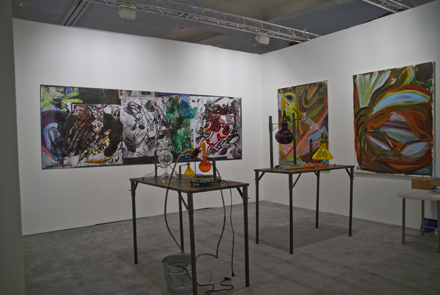 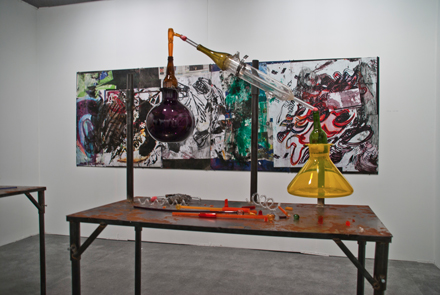 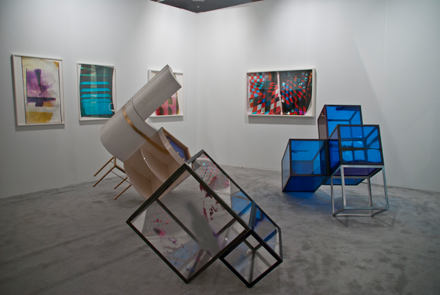 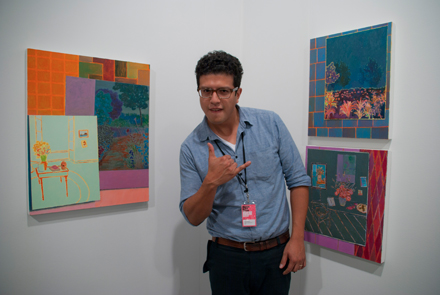 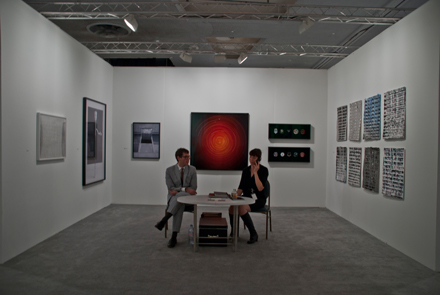 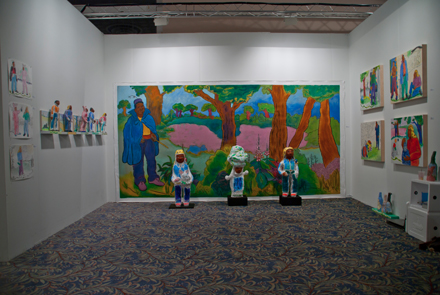 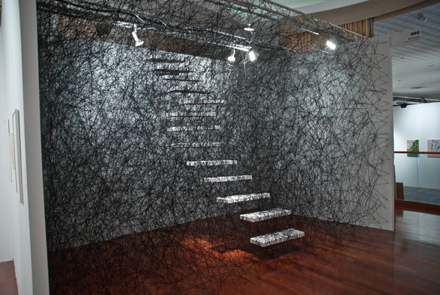 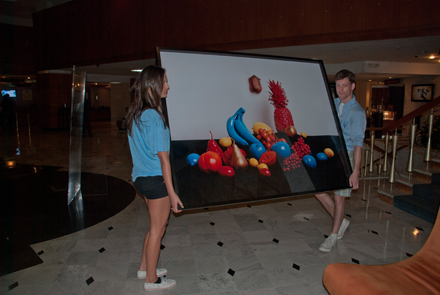 A work en route from a sale

AO: Is MoCa actively acquiring works for the permanent collection? How do NADA and other local fairs participate in the museum’s selection process?

Ruba: MoCA opened in 1994, so it’s a relatively new institution…we try to build our collection from our exhibitions, so often local galleries bring artists that we have shown in the past. It’s a great way for us to see new work and consider possibilities for future programming and acquisitions.

AO: What stands out to you about NADA this year?

AO: What makes NADA a successful fair, in your opinion?

Ruba: There are galleries at NADA that could be in a section of Art Basel but choose to be here because it’s its own destination. It’s a place where you feel a sense of community want to spend time, and want to come back – I think it was that way even when the event was held at the Ice House in previous years. It’s smaller, less chaotic, and more inviting than Art Basel…I think a lot of artists, galleries, collectors, and curators are drawn to that.

This entry was posted on Sunday, December 5th, 2010 at 11:00 pm and is filed under Art News. You can follow any responses to this entry through the RSS 2.0 feed. You can leave a response, or trackback from your own site.