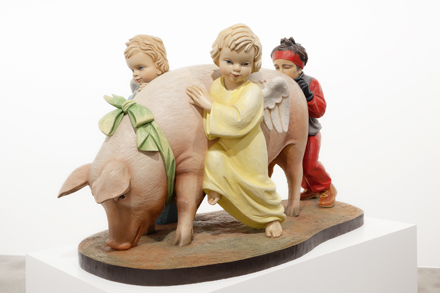 The Foundation of Arts for a Contemporary Europe (FACE) is a collaboration between five non-profit art foundations: the Deste Foundation in Athens, Greece; the Ellipse Foundation in Cascais, Portugal; the Fondazione Sandretto Re Rebaudengo in Turin, Italy; La Maison Rouge in Paris, France; and Magasin 3 Konsthall in Stockholm, Sweden. Established in 2008, the FACE alliance is dedicated to the promotion of emerging international artists by supporting the production and exhibition of new works. Their first initiative takes the form of a traveling exhibition entitled “Investigations of a Dog.” 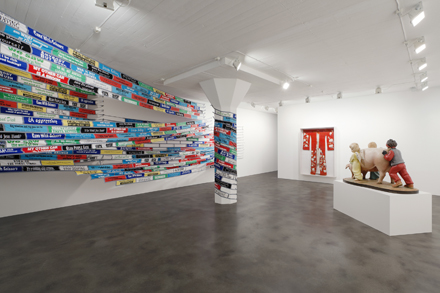 Installation view with Lara Schnitger’s Gridlock, 2005, on the left.

Fondazione Sandretto Re Rebaudegno curator Irene Calderoni introduces Kafka’s short story: “Still a puppy, a dog suffers an identity crisis that brings him to question his own nature and, more generally, the canine essence. Endowed with a more solitary, introverted temperament than other dogs who happily live together without asking themselves questions, the protagonist embarks on a quest for knowledge that takes him to the margins of society, and turns him into a madman, or a stranger in the eyes of others. Paradoxically, this isolation is in fact the expression of an extreme form of love of the investigator dog toward his fellows, because it is out of his concern for others that he is trying to understand what it means to be a dog.”

According to Calderoni, the artists brought together in this exhibition “share a practice of art that can be read in the light of the category of minor” and have initiated an “eccentric” discourse. The focus of these works is on subversion and questioning the acquired notions of truth and falsity. “Like the canine protagonist in Kafka’s short story,” she writes, “these artists ask themselves questions about the meaning of art-making, spurred on by a passionate emotional involvement in human society.” 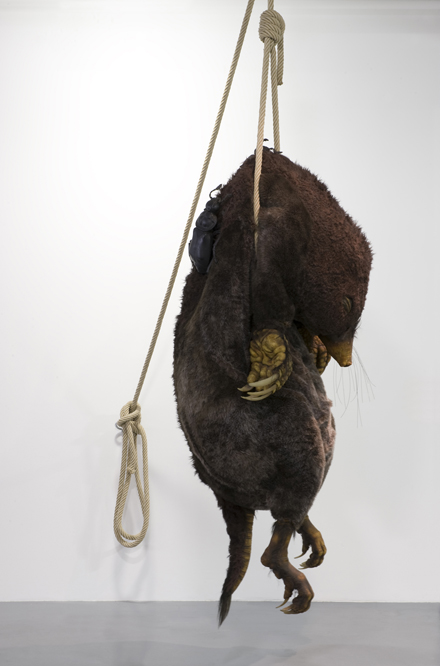 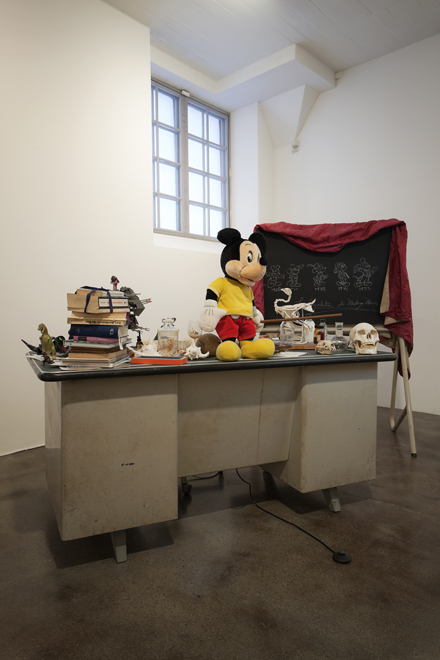 Although the exhibited works in each manifestation of the show remained mostly the same, each institution’s curators had a hand in creating different visual combinations. Tessa Praun, curator at Magasin 3, shared some of her favorite groupings with Art Observed. There is great visual tension and harmony, for instance, in the room that houses a burnt white flag by Gardar Eide Einarsson’s, a pile of black confetti by Stéphane Thidet, and an uncharacteristically messy desk by Mark Dion. Thidet’s heap of material is meant to recall the coal deposits that covered northern France until the collapse of its mine industry in the 1970s. But on closer inspection, states the exhibition catalog, “the heap turns out to be made of tons of black confetti, a material with very different connotations – that of festive celebrations. In Thidet’s installation, the accumulation becomes ephemeral and transitory because of the very lightness of the material employed. The apparently stable, threatening form is actually liable to change with the slightest current of air.” The elegant heap is countered by Dion’s dusty, disheveled desk littered with evolutionary paraphernalia. If one didn’t know better, one might think it was all part of an installation by one artist.

This harmony is broken in the next room, where deep maroon walls house an ambiguous animal sculpture by Fischli & Weiss, an enclosed bedroom architecture cube by Deanna Maganias, while Claire Fontaine’s “STRIKE” turns its back to us. Easily one of the most humorous works in the exhibition, Fontaine engineered her neon sculpture to shine only when the visitor remains behind it: as soon as one steps inn front, the lights turn off in a deliberate denial of access to its consumption. Similarly, Fischi & Weiss’s animal refuses to be classified. 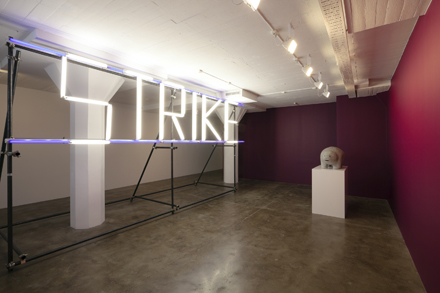 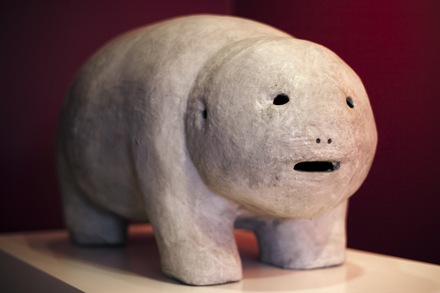 The room that most directly links to Kafka’s discussion of marginalized groups contains a Nauman chair suspended upside-down, a Kara Walker mural, a flag by David Hammons, a large installation of cachaca bottles on cafe tables by Brazilian artist Marepe, and a haunting portrait by Boris Mikhailov. Similar to Fontaine’s refusal, Nauman’s chair, which evokes interrogations, torture, and executions, refuses to commit any of these prescribed actions. The flag by David Hammons refuses the typical colors of the American flag, substituting them with the hues of Africa. Perhaps the most unsettling work in the room is Cattelan’s sculpture Untitled (Gerard), which appears to be a homeless man wrapped in a blanket, slumped in the corner of the room. Unsure whether there is a real figure inside the blanket, the viewer enacts each possible reaction: approaching cautiously, paying homage with sustained attention, or ignoring it all together. 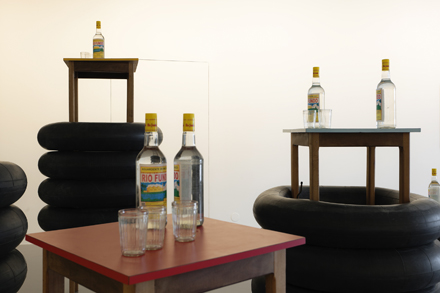 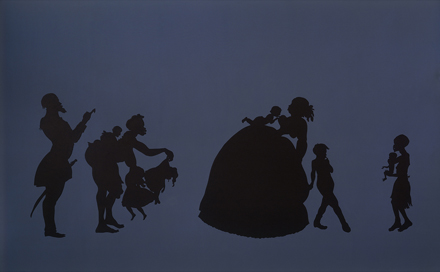 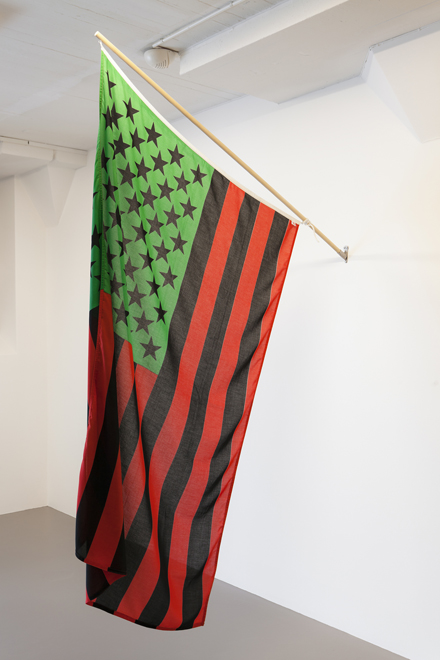 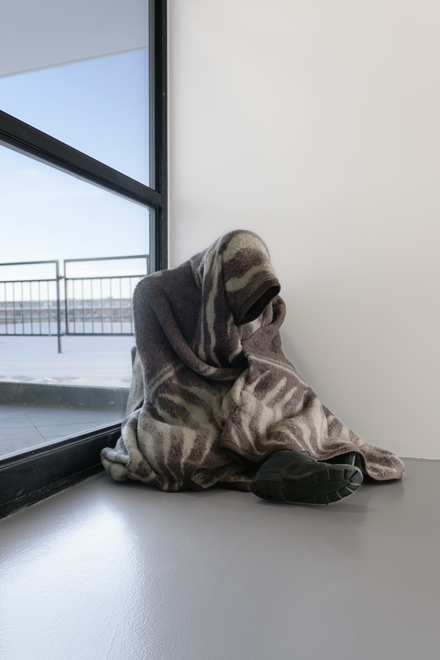 In a tribute to the author who inspired the exhibition, the accompanying catalog features five short stories commissioned by one writer from each country represented in the FACE institutions: Aristide Antonas from Greece, Jonas Hassen Khemiri from Sweden, Rui Cardoso Martins from Portugal, Emmanuelle Pagano from France, and Tiziano Scarpa from Italy. All authors are in their 30s and 40s. Echoing the artworks on view, the stories play with the blurred line between what is real and what is not. One can sit in the lobby of the exhibition and listen to the authors read their stories in their original language.

The visual link of each work to Kafka’s story is less obvious than the accompanying publication. But rest assured, if visitors feel lost, confused, or numb to the work, they are feeling just as Kafka’s protagonist might. 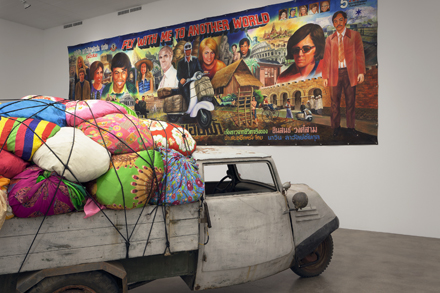 Kimsooja’s Bottari Truck, 2005, parked in front of Navin Rawanchaikul’s Fly With Me To Another World (Dedicated), 1999. 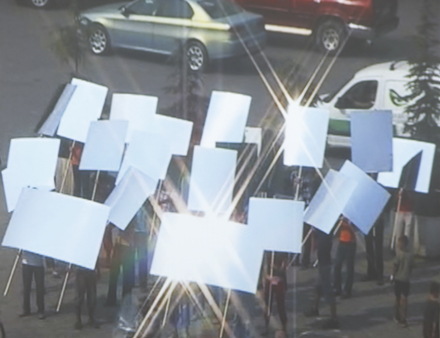 The idea for the network came from Francesco Bonami, artistic director of the Fondazione Sandretto Re Rebaudengo (Bonami was curator of the 2010 Whitney Biennal). All are fairly newly established: the DESTE Foundation in 1983, Magasin 3 in 1987, Sandretto in 1995, La maison rouge in 2004, and Ellipse in 2006. The concept was that the five institutions in the network combine forces to produce different projects: exhibitions, commissions of art works, publications, and seminars.

According to Magasin 3 curator Tessa Praun, FACE offers a chance to have “an ongoing exchange of ideas with other institutions” as well as “access to four other art collections in a way that we would not have otherwise.” Since it can be logistically complicated, time consuming and expensive to borrow works from other institutions, the collaboration simplifies this process and at the same time widens the audience of each institution. “What the future holds for FACE is yet not decided,” Praun told Art Observed. “We have started to discuss our second joint project but it is still at an early stage.” We look forward to seeing what they come up with. 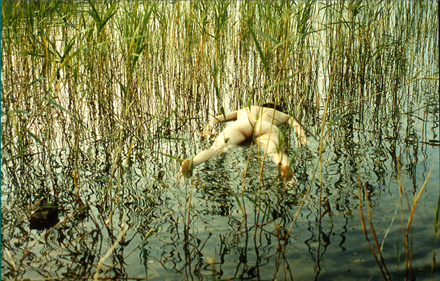 Annika von Hausswolff, Back to Nature, 1992. 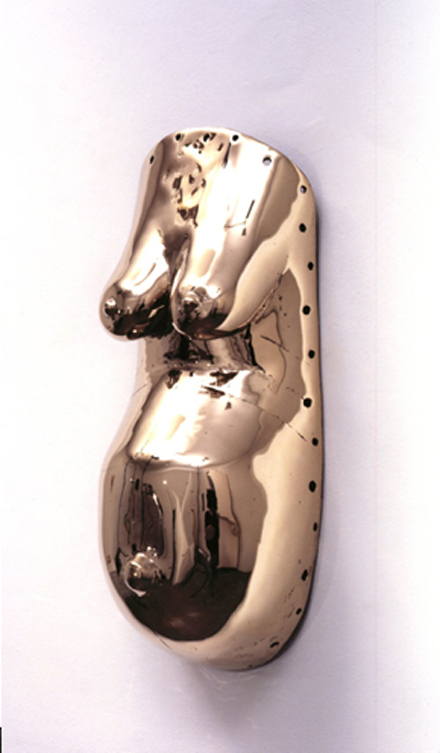 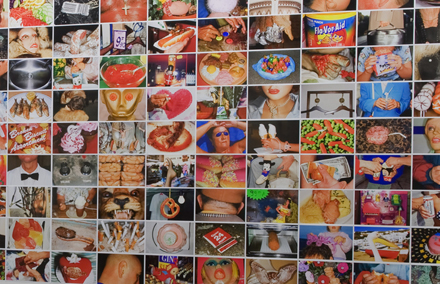 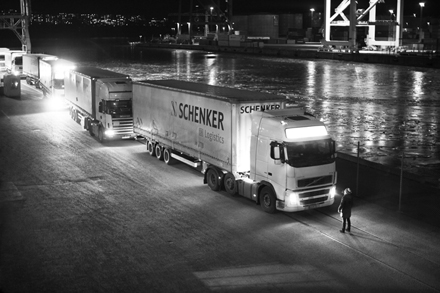 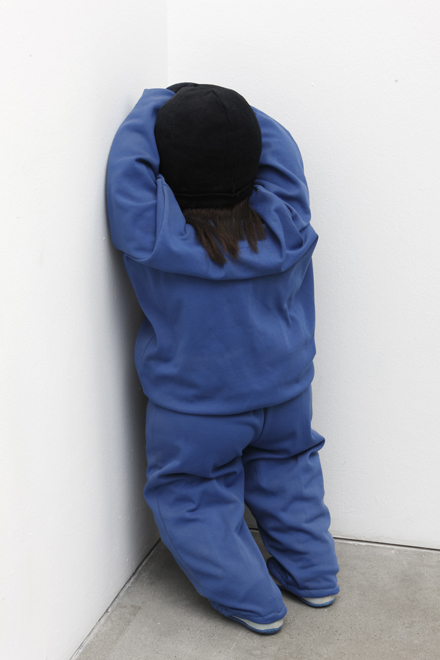 This entry was posted on Monday, March 14th, 2011 at 1:14 pm and is filed under Go See. You can follow any responses to this entry through the RSS 2.0 feed. You can leave a response, or trackback from your own site.