AO on Site – New York: Richard Serra “Drawing: A Retrospective” at the Metropolitan Museum of Art through August 28th, 2011 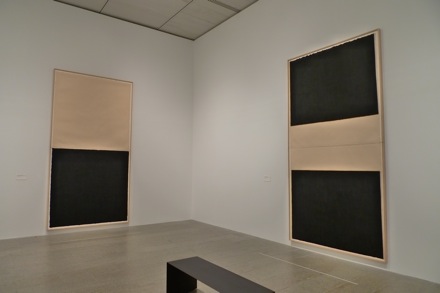 Installation view at the Met Museum. All images Nicolas Linnert for Art Observed.

Notions of lightness, delicate strokes, and diminutive scale may come to mind when imagining the artistic tradition of drawing. However, not a single one of these tendencies is applicable to the Metropolitan’s Museum’s new exhibition Richard Serra Drawing: A Retrospective, in which the strokes are bold, the images dense and the scale massive. One of the few contemporary shows that the Met has shown recently and a chronological anomaly amidst the 17th-18th French painting galleries, this retrospective of Richard Serra‘s drawing is comprised of about fifty works and traces the artist’s use of mainly paintstick on varying textures from the 1970’s to present day. 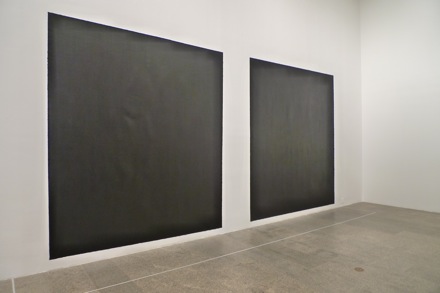 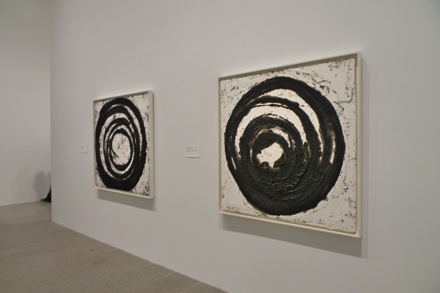 One must pass the museum’s extraordinary collection of art that traces back to Antiquity just to reach the Tisch galleries. In contrast to these pieces, Serra’s work looks and feels new (and some of it is). Going further into the exhibition, this feeling of visual incongruity rapidly disappears as the works on display allow for an immersive experience that avoids being overbearing. Serra’s paintstick drawings make a quiet impact that grows louder as the viewer further interacts with the work.

Pacific Judson Murphy is a large two-part paintstick-on-linen piece that soaks itself onto the gallery walls and converges together at the room’s corner, bringing the viewer into its shadowy aura and serial texture. Another work, September, presents a sort of visual vortex with heavy, swirling spiral traces that fervently overlap one another. Excesses of paintstick were used to produce the swirls, and the strokes themselves have a bulky, protruding form. September demonstrates a violence and spontaneity that somewhat uncannily visualizes the mood of its namesake month in 2001—which is also the year the work was made. The sculptural, jagged quality of the drawings reminds of the physically encapsulating act of being in and around Serra’s renowned steel structures. 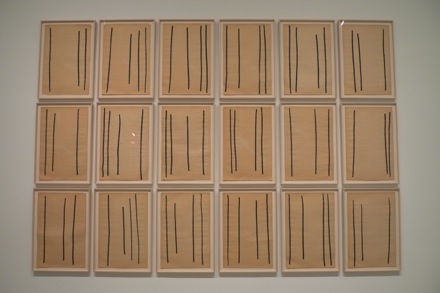 The retrospective ends with a broad showcase of the artist’s drawings on a smaller scale (in notebooks) before opening back up again to Union, a large piece that was commissioned specifically for the museum site. The exhibition concludes at the exhibition gift shop, where aspiring Serras can purchase their own oil sticks and paper.  Richard Serra Drawing: A Retrospective coincides with a similar show at Larry Gagosian’s Geneva gallery, and is on view until August 28th. 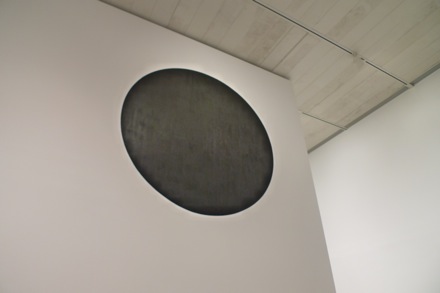 This entry was posted on Tuesday, April 19th, 2011 at 1:34 am and is filed under AO On Site. You can follow any responses to this entry through the RSS 2.0 feed. You can leave a response, or trackback from your own site.