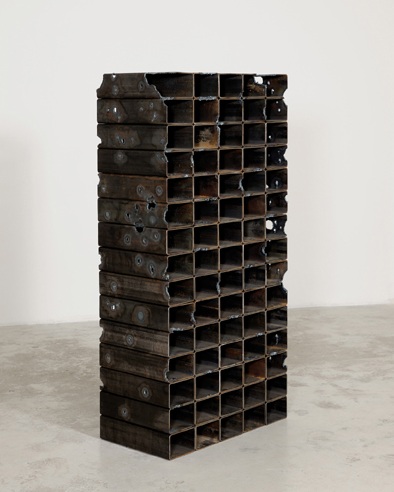 Bourj (2010) by Mona Hatoum, via Alexander and Bonin Gallery

Currently on view at Alexander and Bonin Gallery is “Bourj,” an exhibition of recent works by Palestinian artist Mona Hatoum. The artist’s fifth exhibit with the gallery, the show features a wide range of the her  political and poetic oeuvre in a range of media including installations, sculpture, works on paper, and photography.”Bourj,” the title of the exhibit, means “tower” in Arabic and refers to a specific work the artist originally made for a solo exhibition at the Beirut Art Center in 2010. The piece is made of stacked steel rectangular tube sections which have been cut and burnt, giving the impression of a building fallen prey to the scars of war.

More text and related images after the jump….

Natura Morta (2010) by Mona Hatoum, via Alexander and Bonin Gallery 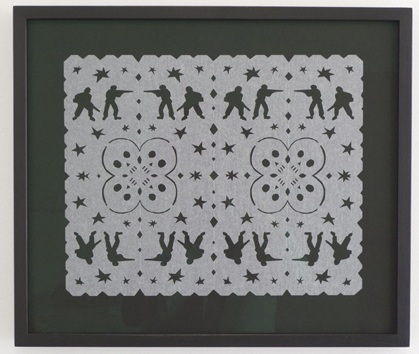 “Bourj” uses an altered grid structure, a technique Hatoum has employed in other works such as Light Sentence (1992), Current Disturbance (1996), which is currently on view at the Whitechapel Gallery in London, and Cube (9x9x9) (2008), which was recently exhibited at “On-Line” at the Museum of Modern Art in New York. A melancholic undertone is revealed in this piece which seemingly depicts the model for a future building in which the signs of destruction are already apparent. 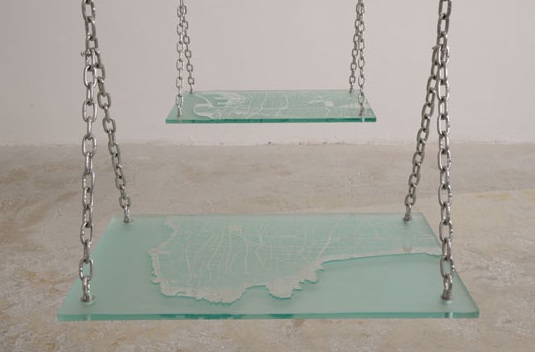 Balancoires (2010) by Mona Hatoum, via Alexander and Bonin Gallery

Also on view is Interior/Exterior Landscape (2010), a room-size installation of dislocated household furniture. An empty bed frame is bare except for a pillow embroidered with hair tracing the artist’s most frequent flight routes, and long hair threaded through its wires. A table and a chair are pushed into one corner. A bird cage protecting one single ball of hair hangs on the other wall and a metal coat rank supports two circular wire hangers, which frame drawings of the Eastern and Western hemispheres as well as a market bag made from a single cut-out print of a world map. 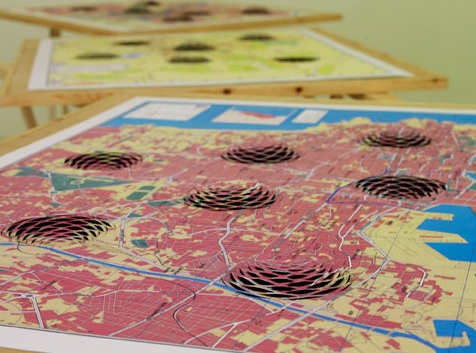 In 3-D Cities (2008- 2009) the artist exhibits printed maps of the cities of Beirut, Baghdad, and Kabul, mounted on tables joined together by wooden supports and depicting the cycles of destruction and repair which have continually plagued such cities. The aftermath of war is revealed through subtly cut-out parts showing convex and concave areas which refer to bomb craters and construction sites. 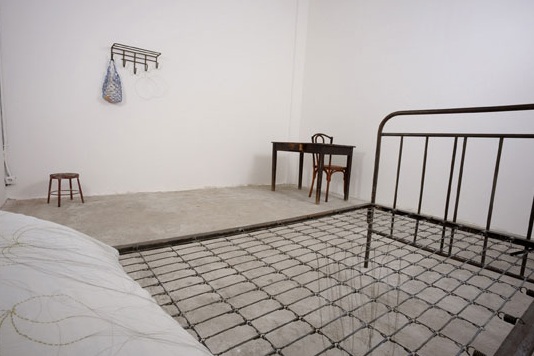 Born to a Palestinian family in Beirut, Mona Hatoum has lived in worked in London since 1975. Her works incorporate the bare language of minimalist objects within a quirky, surrealist tone. They comment on contemporary social and political, ideology thus inviting the viewer to participate on an intellectual as well as emotional level. Mona Hatoum’s works are found in major museums and private galleries throughout the world. 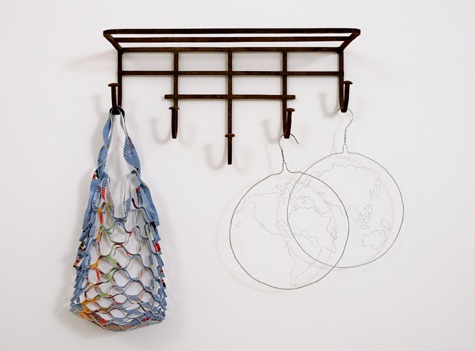 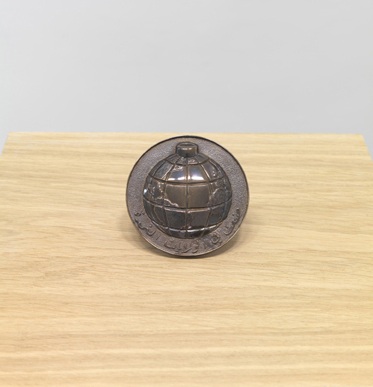 Medal of Dishonor (2004) by Mona Hatoum, via Alexander and Bonin Gallery 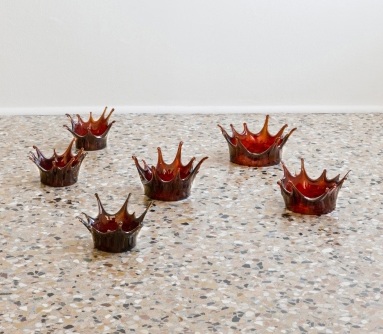 A Bigger Splash (2010) by Mona Hatoum , via Alexander and Bonin Gallery

This entry was posted on Monday, April 11th, 2011 at 3:20 am and is filed under Art News. You can follow any responses to this entry through the RSS 2.0 feed. You can leave a response, or trackback from your own site.