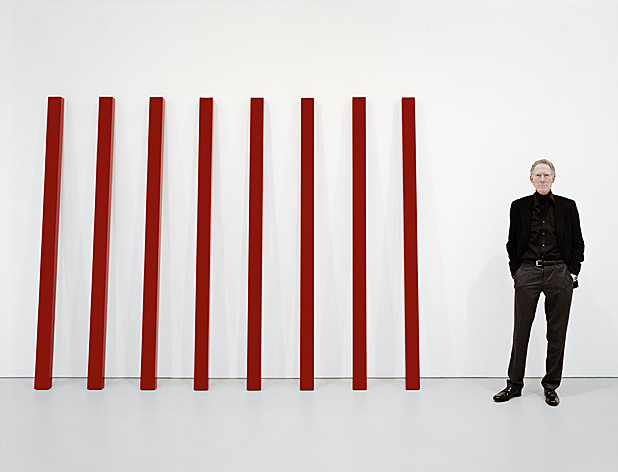 John McCracken, who died at the age of 76 on Friday in New York, bridged an empirical study of Minimalist matter with subtle mysticism, thereby extending realities beyond the concrete and the visible. Irreducible to its object-ness, his work is imbued with almost invisible traces of the hand and proposes what contemporary transcendentalism might look like. Unafraid of taboo topics and non-anthropocentric ecology, McCracken held a fervent belief in the intelligence of other multiple forms of life that gave new dimensions to his work. 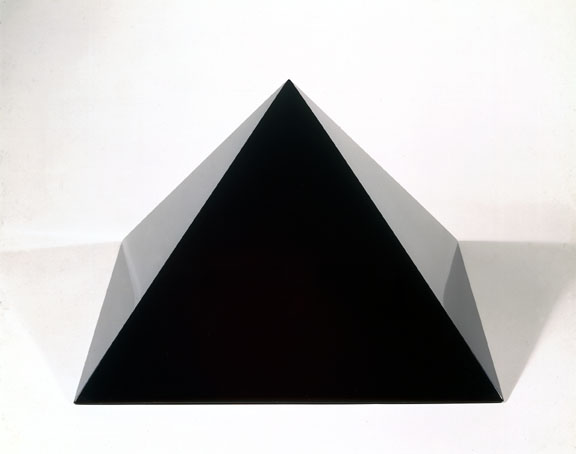 John McCracken was the preeminent spiritual Minimalist. At age 76, he passed away in New York on April 8th, 2011. Renowned for his hand-polished monolith and plank sculpture, his colored leaning ‘elements’ (as he liked to call them,) and plinths were shown alongside his early mandala paintings at Documenta12 in 2007. McCracken was a visionary artist of extraordinary sensitivity and rigorous depth. A survey of his work is currently showing at Castello di Rivoli, in Torino Italy, and his work with his contemporaries is on view at Nyehaus in New York. 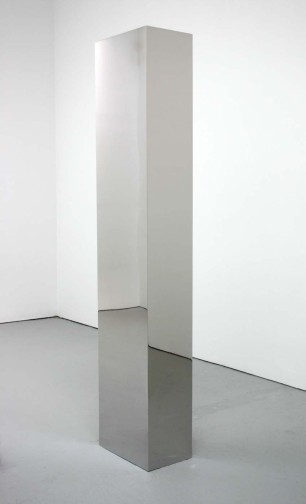 From the intimate conversations we (Patrick Meagher and Yunhee Min) had in 2008 with the artist and his widow Gail Barringer at their home, McCracken eloquently expressed his understanding of the universe by the simple example of one crossing a room– did the universe change from that ostensibly mundane action? How might one consider a simple gesture as such in relation to everything else? Does the space around your body move with you and change the shape and form of everything else? A man of profound yet playful character, he delivered philosophy with impassioned energy and charm in a Deleuzian flow of post-dialectical multiplicities. In his handcrafted and pristine dimensional color surfaces, McCracken cultivated an ineffable quality beyond the surface, which evokes a certain sensuality and contemplative spirituality not often associated with the east coast school of Minimalism. More akin to the west coast American Minimalism school which drew from the local vernaculars of surf culture and car culture (Larry Bell, Craig Kaufman, Peter Alexander et al), McCracken went further West off the coast, reaching out to the East of Asia and to Indian Buddhist traditions. 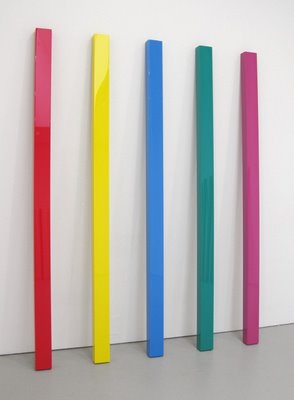 To honor John McCracken and the legacy of his contributions, a rethinking of his work in broader terms of post-Cartesian contemporary art is necessary and potentially enlightening as a progenitor of recent work dealing with metaphysical realms and expanded consciousness. John hoped that his work would eventually be understood not as a purely modernistic pursuit, stripped of or deemed apparently devoid of spiritual aspects that are hard to quantify. In the published conversation mentioned above, McCracken speaks at length about his work in relation to topics both esoteric and salient to current dialogues in critical contemporary art.

John McCracken was a generous and kind visionary artist, boldly plumbing broad depths of existential thought while refining his own sculptural vocabulary in works that touch many people, regardless of their familiarity or affinity with his ideas and visions. John was a believer in things indescribable– even with the discovery of many new planets, the notion of extraterrestrial life remains unwieldy to most. John is greatly missed, and hope continues that his work be parsed to a wider extent in the near future.

* * * * *
As a perspective on his work, the following is an excerpt from The Silvershed Reader, written by Patrick Meagher and Yunhee Min, with edits from Silvershed.

John McCracken’s work embodies a threshold of physical matter and infinite mind/space. In his own words, this ‘character,’ of his work has been indefinable and difficult to write about as an integral whole. Typically referred to as one of the leading West Coast counterparts to the Minimalist regime of Donald Judd, Carl Andre, Robert Morris, Dan Flavin, Sol Lewitt and Robert Bladen, McCracken’s work extends the architecture of Minimalism, complicates the surface of simulated or real machine production, and reflects a mysticism of transcendence.

Central to Minimalist principles is subject-object relations, articulated through scale relationships between the art object and the viewer. Michael Fried, in his seminal essay, ‘Art and Objecthood,’ identified this adamant material presence as ‘objecthood,’ which for him was to represent the abhorred quality of ‘theatricality.’ McCracken’s work is clearly involved in this ‘object’ discourse. However, the leaning planks – ‘elements,’ as he calls them – go beyond the function of gravity, activating the surrounding space as volume and continuous field that is both measurable and immeasurable as sculpture. When materialized, the outdoor sculptures produced in stainless steel dematerialize as they reflect and refract their environment. These totem-like forms are absorbed into the surrounding space, no longer as epic as Kubrick’s contemporaneous monolith in ‘2001: A Space Odyssey.’ Hence, for McCracken, the phenomenological diagram is much more open-ended beyond the subject-object reciprocity.

Seen as part of the ‘Finish Fetish’ group of West Coast artists working in the painting-sculpture realm, including Robert Irwin, Craig Kaufman, Ann Truitt, Larry Bell, and (early) Judy Chicago, McCracken’s work is reminiscent of slick automobile surfaces that spell ‘future’ across many generations with the look of industrial fabrication. But the glossy reflective surface and the liquid-like quality of the color bear traces of the hand in sanding and buffing details, upon closer look. In this aesthetic context, technology, whether human hands or sophisticated computer software, remains only a means of realizing his vision, thereby avoiding any simple reductive reading of values in his intuitive Minimalist work. 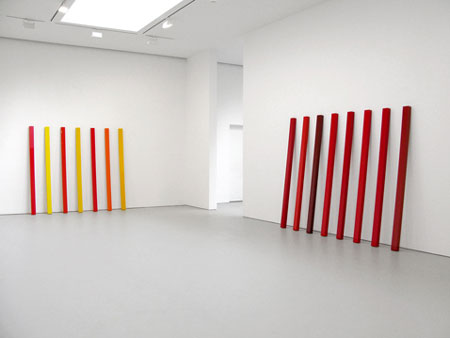 –  by Patrick Meagher and Yunhee Min, edited by Nicolas Linnert, with special thanks to Linda Norden.

* * * * *
For the full essays and interview- a near verbatim artist’s chat with John McCracken, see ‘The Silvershed Reader’, available in limited quantities at Printed Matter, NY, Art Metropole, Toronto and Ooga Booga, LA, and as a free downloadable PDF online: http://www.thesilvershed.org/silvershed_reader_1.pdf

This entry was posted on Monday, April 11th, 2011 at 4:37 am and is filed under Art News. You can follow any responses to this entry through the RSS 2.0 feed. You can leave a response, or trackback from your own site.