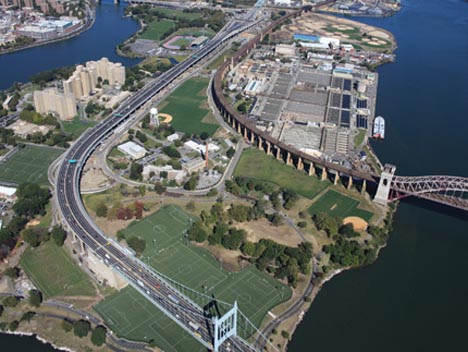 Aerial short of Randall’s Island, via The Art Newspaper

Frieze, the hallmark London contemporary art fair which has steadily built itself up since 2003, today announced its expansion to New York where it will host a fair in Randall’s Island Park.  Frieze Art Fair will open on May 2nd for VIPs, with the public gaining access between May 3rd and 6th.

The fair will coincide with the city’s 2012 contemporary art auctions and will be around the same size as its London counterpart, with roughly170 galleries from 33 countries participating.  Notably, the fair fall outside of the traditional art fair week in March, anchored by the Armory Show.  This may prompt some galleries to re-evaluate which fairs they will participate in. Similarly, the timing of Frieze’s New York fair may affect galleries who may have opted for Art Basel in June.

more story after the jump…

According to a Frieze press release, “The New York fair will take a similar approach to that which has made Frieze Art Fair one of the world’s most influential contemporary art fairs, housed in a bespoke structure and located in a unique setting.” SO-IL, a Brooklyn-based architecture firm, will design a tent structure for the fair, which will also afford views of the East River and Manhattan. SO-IL is well known for its work on the outdoor courtyard for PS1’s “Warm Up” event series in 2010.

Amanda Sharp and Matthew Slotover, co-founders of Frieze, decided to host it in Randall’s Island Park due to its size and convenient access to Manhattan and Connecticut, where many wealthy art collectors reside. “When we happened on Randall’s Island Park, that was when we got very excited,” Ms Sharp said, because it meant they could “do it on a scale that makes sense.” Frieze is also getting strong support from Mayor Michael Bloomberg, who in a statement said:  “Frieze has a reputation for hosting world-class arts shows, and with Randall’s Island Park as the location, and New York city’s waterfront as the backdrop, this new event should be extraordinary.” The London fair regularly sells out its 60,000 tickets available to the public.

“This funding is crucial to ensuring that Federal Way remains a safe place to live, work and raise a family,” said Congressman Adam Smith. “In the current economic environment, cities and towns across the country face difficult choices when it comes to public safety funding. Today’s announcement will help relieve some of that pressure and allow Federal Way to continue to focus on its public safety priorities.” The grant, which is the largest awarded in Washington State, is part of a $298 million announcement made by the Department of Justice COPS Office, COPS Hiring Program (CHP). The grants are designed to create and/or preserve law enforcement jobs. The grants were made to 379 different local law enforcement agencies in 51 states and territories. in our site law enforcement jobs

CHP also provides 100 percent funding for approved entry-level salaries and benefits for three years (36 months) for newly-hired, full-time sworn officer positions (including filling existing unfunded vacancies) or for rehired officers who have been laid off, or are scheduled to be laid off on a future date, as a result of local budget cuts. Any additional costs above the approved entry-level salaries and fringe benefits are the responsibility of the grantee agency.

“A safe community is a strong community and ensuring that our local law enforcement agencies have the tools and resources they need will continue to be a top priority of mine in Congress,” continued Smith. For any query with respect to this article or any other content requirement, please contact Editor at htsyndication@hindustantimes.com

This entry was posted on Friday, May 20th, 2011 at 12:07 am and is filed under Art News. You can follow any responses to this entry through the RSS 2.0 feed. You can leave a response, or trackback from your own site.