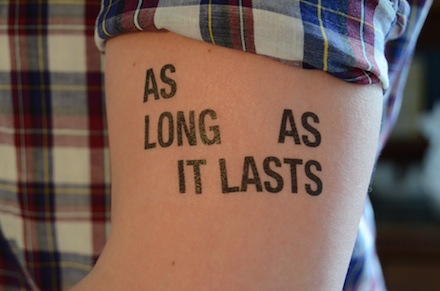 Temporary Tattoo provided with exhibition statement As Long As It Lasts (2011), photo by A. Bogart for Art Observed

Arratia, Beer present “As Long As It Lasts…”, a group exhibition that is transitory in nature.  The gallery invited several artists and designers to design tattoos, which are inked on site by a professional tattoo artist, Sarah Bolen from AKA Berlin.  The tattoo artist was only on site for Gallery Weekend, April 29-May 1, so appointments need to be made for anyone wishing to be ‘signed by’ an artist.  Those who choose to have an artist’s design tattooed get a certificate of authenticity, thus certifying that a work of art is part of them.  Appointments can be made until the end of May. 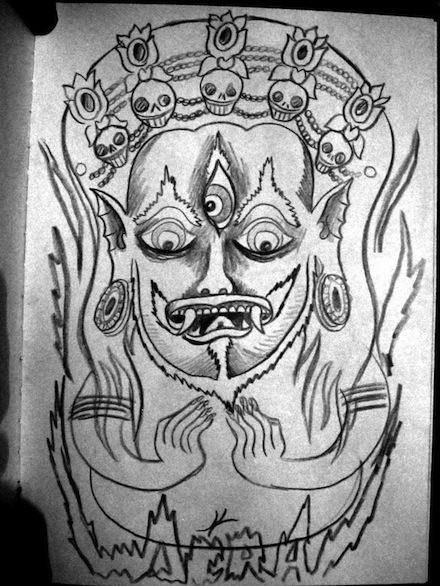 Among the artists who designed tattoos for the exhibition are well-known names such as Francesco Vezzoli, Wim Delvoye, Lawrence Weiner, and the Mexican tattoo artist Dr. Lakra.  Vezzoli , who shows with Gagosian, offers as a design his own initials, including his trademark teardrop.  Lawrence Weiner’s graphic text design alludes to political critique, while the well-known Dr. Lakra offers a mixture between Pre-Colombian and Mexican iconography for those willing to buy body art.  Similarly, Mariana Castillo Deball’s tattoo design stems from drawings of the Quetzalcoaltl.  Wim Delvoye and Cao Fei provide some of their best known ‘brands’; Delvoye, for example, offers his Cloaca logo, referencing his Cloaca machines. 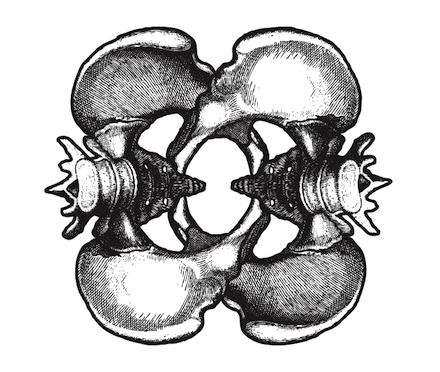 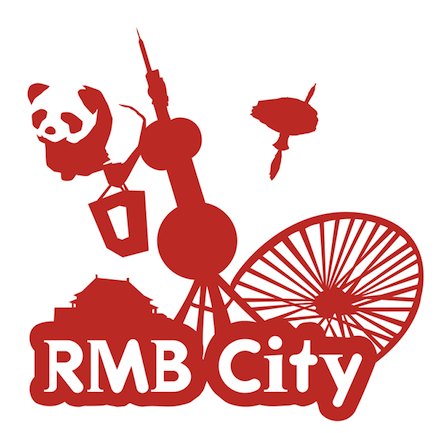 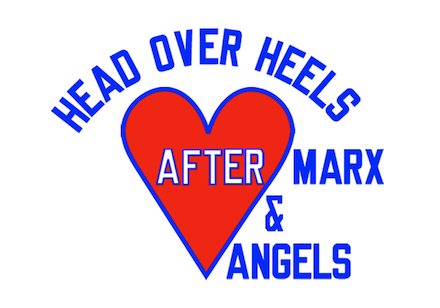 This is the second mounting of  “As Long As It Lasts…”, the first having been organized by Aric Chen, Josee Lepage, and the late Tobias Wong at Design Miami/Art Basel Miami Beach in 2007.  This new instantiation of the exhibition is composed of a new list of artists and designers, excepting Weiner.  The other artists and designers involved are Bless, Constantin and Laurence Boym, Fernando Bryce, Jaime Hayson, Christian Jankowski, Peter Marino, Olaf Nicolai, Damian Ortega, Dexter Sinister, Kiki Smith, and Andrew Zuckerman.

New abstract works by Matthew Metzger can also been seen at Arratia, Beer in a show titled “ Double Back” – until June 11, 2011.

Exhibition Site: Arratia, Beer
“A Tattoo Master, Off the Street, Into the Gallery”: NYT article

This entry was posted on Thursday, May 19th, 2011 at 7:53 am and is filed under Go See. You can follow any responses to this entry through the RSS 2.0 feed. You can leave a response, or trackback from your own site.

One Response to “Go See – Berlin: Temporary Tattoo Parlor at Arratia, Beer until May 31st, 2011”