AO On Site at the 54th Venice Biennale 2011: The Courtauld Institute’s “One of a Thousand Ways to Defeat Entropy,” through November 27, 2011

Currently on view at the Arsenale Novissima in Venice, Italy is “One of a Thousand Ways to Defeat Entropy.” Organized by the Courtauld Institute of Art, in collaboration with AVC Charity Foundation, the exhibition is one of the official collateral programs of the 54th Venice Biennale. Curated by Alexander Ponomarev and Nadim Samman, the exhibition comprises of  four contemporary artists have been commissioned to create a site-specific work engaging with the theme of entropy: Adrian Ghenie (London/Berlin), Hans Op de Beeck (Brussels), Ryoichi Kurokawa (Osaka/Berlin), and Ponomarev himself (Moscow).

“Entropy: A key term characterizing the movement towards chaos – in physics, probability theory, sociology and information technology. The entropic end-state is nothing less than uniform oblivion, which recent art-theoretical discourse has associated with representations of melting and liquidification – an ocean of homogeneity. The exhibition throws light on this inescapable tendency (declared to be the second law of thermodynamics), demonstrating that resistance to it can only be carried out by a creative person. Only creators give birth to life energy that is capable of creating improbable structures. The bearers of this power – artists, engineers, poets – are a small army, the guides of evolution, warriors with cosmic noise. In June they come together in a place where the concept of entropy takes on a strategic character: Venice, the sinking city. Located in the Arsenale Novissimo (a former shipyard) One of a Thousand Ways to Defeat Entropy is a fantastic machine, a vessel, sailing in the expanding cosmos of the imagination, leaving behind works in space that allow us – for a second at least – to doubt the inevitable domination of entropy.”

Ryoichi Kurokawa contributes Octfalls, a digital audio-visual work that consists of eight LCD screens and attendant speakers suspended from the ceiling of the Arsenale, arranged in an octagonal three-dimensional configuration. Oscillating footage of waterfalls and digital distortion whirls around the viewer with sound – producing a destabilizing and hallucinatory effect. Kurokawa was born in Osaka, Japan (1978). He lives and works in Berlin. 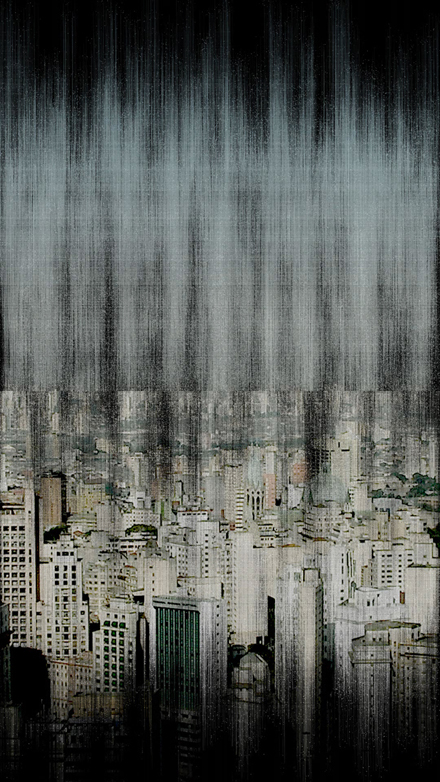 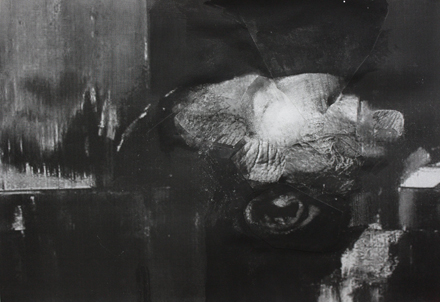 Alexander Ponomarev (b.1957) is represented by Formula. This work consists of two eight-metre high acrylic columns, each clear and hollow with a diameter of one and half metres, containing twelve metric tons of lagoon water. Within each, a kinetic futuro-automobile rises and falls in its vertical casket. Alexander Ponomarev was born in Dnepropetrovsk, Russia (1957). He lives and works in Moscow.

Hans Op de Beeck debuts the latest in his acclaimed series of ‘total’ installations, Location 7: an immersive environment faithfully evoking a pathetic Western European suburban home and garden in grey monotone – within which every aspect, from furniture to blades of grass, is made of concrete. It appears as if some Vesuvius has covered anywhere western Europe in ash. Op de Beeck was born in Turnhout, Belgium (1969), and lives and works in Brussels. 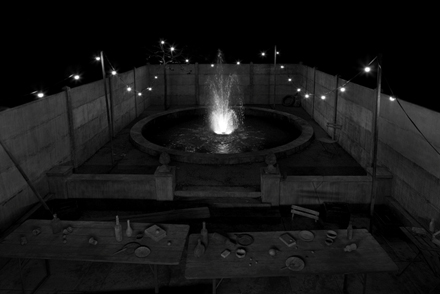 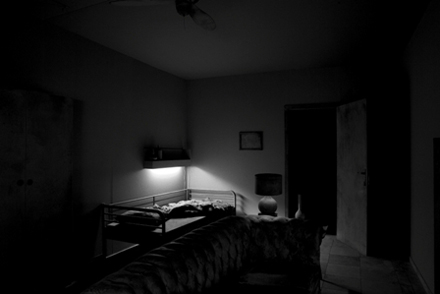 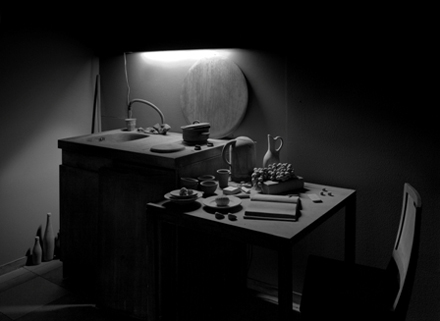 Alexander Ponomarev graduated from the USSR Nautical Engineering College in 1979, following a period at the Orel Art School. He is an Officier d’Arts et de Lettres (France) and a member of the Russian Academy of Arts. In 2007 he represented Russia at the 52nd Biennale di Venezia and in 2009 docked his handmade submarine, SubTiziano, on the Grand Canal as an Official Collateral Project of the 53rd Biennale. His works are in major public collections worldwide including the Centre Georges Pompidou, FNAC (Fonds National d’ Art Contemporain), France, the State Russian Museum, St Petersburg, the Collection of the Great Duchess of Luxembourg, the National Museum of Singapore, and the University Jaumel, Castellon de la Plasa (Spain).

Nadim Samman read Philosophy at University College London before undertaking a doctorate in Art History at The Courtauld Institute of Art. He has written for publications including Third Text, The Art Newspaper, Art Review (Online), Contemporary, Asian Affairs, Art India, Erotic Review, Naked Punch and WestEast. He has also been an invited speaker at MoMA Warsaw, the 2009 Beijing Biennale, Christie’s and SOAS. His curatorial projects in London, Moscow, Berlin and Zurich have included presentations of leading Russian modern and contemporary artists, emerging international talent and, recently, a large-scale photography exhibition at Somerset House (London) under the patronage of Prince William. In February 2012 Nadim curates the 4th Arts in Marrakech Biennale.

The exhibition is open daily except Tuesdays (vaporetto station: Bacini), running through the end of the Biennale on November 27, 2011.

This entry was posted on Saturday, June 18th, 2011 at 3:13 pm and is filed under Art News. You can follow any responses to this entry through the RSS 2.0 feed. You can leave a response, or trackback from your own site.