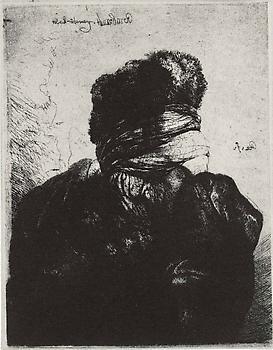 On display through July 23rd 2011 at Genevas’s Gagosian Gallery, are etchings by the artist Glenn Brown.  Known for his appropriation of images, here Brown employs portraits by Lucien Freud, Rembrandt van Rijn, and Urs Graf. By first digitally altering the source images and then layering his reworked interpretations, Brown creates composite paintings which serve as the basis for his etchings.

Despite his reliance on the contemporary, Brown makes clear that, in fact, it is the past that is his best inspiration. He explains: “As time has gone on, I have increasingly detached myself from contemporary art. I still look at a lot, but I am far more drawn to the preceding five hundred years of the history of painting. It seems very short-sighted just to look at the history of the past few years when there is a much longer history to draw on.” The etchings are not the first example of Brown’s historicizing work: many of his paintings recall late-16th century Mannerism, and his painterly style pays homage to the great masters. 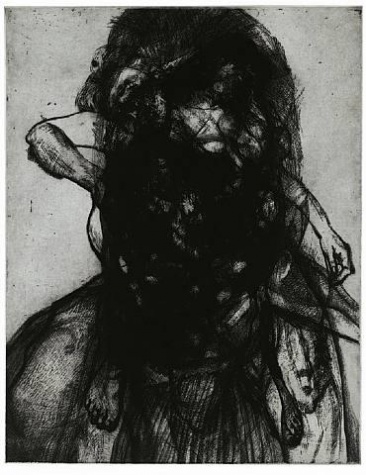 Brown’s Layered Portrait (After Rembrandt) from 2008 directly appropriates aspects of many of Rembrandt’s self-portraits, and here, the furry hat and coat copy those depicted in many of Rembrandt’s self-portraits. Yet unlike Rembrandt’s paintings, Brown has wrapped the subject’s face in a bandage, obscuring his face from view. This is not an obvious self-portrait, if it is a self-portrait at all.  Stylistically, too, Brown echoes works by Rembrandt (both his paintings and etchings) in his play with dramatic lighting as the subject is represented shrouded in shadow. In addition, Brown’s vibrant, sketchy lines recall those used by Rembrandt in his own many etchings.

In a 2007 exhibition of paintings at New York’s Gagosian Gallery, Brown’s work again relied on morphing borrowed images. Inspired by famous images of all different styles and periods, his reinterpretations blur and distort his sources so that they remain unknown. In Wild Horses, a female sits holding a baby horse, a subject known to the portrait genre. Yet her yellow skin swirling with colors, and lack of pupils makes the painting feel more science-fiction than natural. His painting plays with layers of colors, distorting surfaces, like marbled paper. 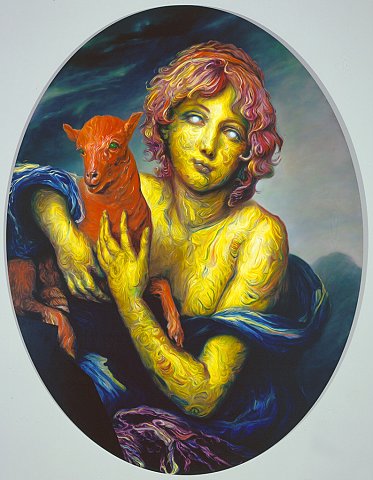 Similarly in his current exhibition in Geneva, it is difficult to discern what is artificial, and what, if anything, is real. Brown’s etchings all to clearly reference earlier works, yet the magic lies in their ability to alter the past, and to re-imagine an earlier vision.

This entry was posted on Tuesday, July 19th, 2011 at 11:22 pm and is filed under Go See. You can follow any responses to this entry through the RSS 2.0 feed. You can leave a response, or trackback from your own site.