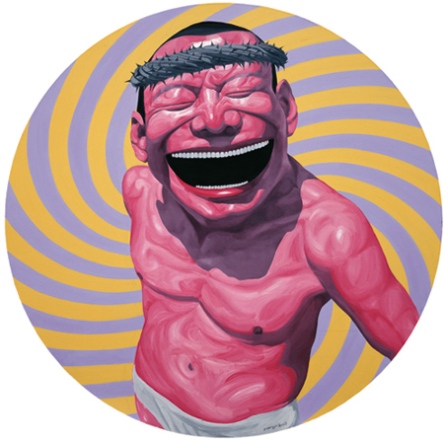 Yue Minjun, The Crowing with Thorns, 2009 via Pace Beijing

The Road, an exhibition of recent paintings by Chinese artist Yue Minjun (born 1962) is on view at the Pace Gallery, Beijing from June 6th to July 16th, 2011.  Minjun gained international recognition in the 1990’s for his political allegories, epitomized by rows of figures with grotesque smiles, commenting on Chinese communist ideology. The Road features Minjun’s signature grinning characters with strong reference to Christian iconography.

More text after the jump….

His recent use of Christian symbolism in combination with uncanny laughter of figures developed earlier in his career raises the question of relationship between the East and the West in the contemporary socio-economic climate. In his essay “Few Words Behind Works,” Minjun wrote that the theme of “conflict between Eastern and Western culture” often pervades his work. Minjun seems to question the authenticity of  European tradition by incorporating his grinning characters into European Middle Age art tradition in the same way he questioned the interpretation of communism in China. His use of grinning figures to address problems with representing the past, both in the East and in the West, may signify the homogenization of contemporary society resulting from the global market economy.  Thus, to better understand the conceptual quality of Minjun’s canvases displayed at the Pace, Beijing, it is necessary to consider the socio-political context of Minjun’s career.
In 1966, the leader of the Chinese Communist Party Mao Zedong, launched the Great Proletarian Cultural Revolution. The causes of the Revolution have been variously interpreted but as its result, millions of political dissidents ended up tortured, raped, persecuted, and forcefully displaced.  The Party promoted the art style called Revolutionary Realism that communicated revolutionary ideals to masses of peasants and workers through easily comprehensible naturalistic forms. Minjun was raised in socialist China working on oil platforms after he finished the high school. He also witnessed the end of the Cultural Revolution in 1976 and first encounters with the West after a decade of cultural isolation.  Minjun addresses both idolizing the figure of the communist leader in the East and consumerism and mass media in the West. In  “Few Words Behind Works,”  he explains his distinguishable style – “by employing traditional painting and sculpture techniques, multiple clones of my self-portrait image have been created in order to invent a new idol; similar to the approach of television and movies. When an image is duplicated continuously, the subsequent strength in numbers produces an immense force. Once the image transforms into an idol, I am able to manipulate and utilize the image repeatedly. An idol has a life-force, it often influences our lives and regulates our conduct by setting itself as an example. A contemporary society is an idolized society hence its culture becomes an idolized culture.”
Canvases in the Pace Gallery follow this manner. Minjun’s technique of appropriation and modification of older sources signifies a postmodern trend in visual arts, which aims to relativize established meanings associated with imagery in a contemporary global culture. Known as Appropriation Art in the West and practiced by artists such as Jack Goldstein and Sherrie Levine in the 1970’s, this technique emphasizes the idea that the meaning of each image depends upon the context of its display and its relation to other images.  In China, this style took the form of Cynical Realism in the 1990’s often interpreted as a parody of the art of Revolutionary Realism.
In the Annunciation (2009) and the Deposition from the Cross (2009), Minjun deprived typical Christian religious paintings of their protagonists pointing out the gap between historical facts and their contemporary interpretation. 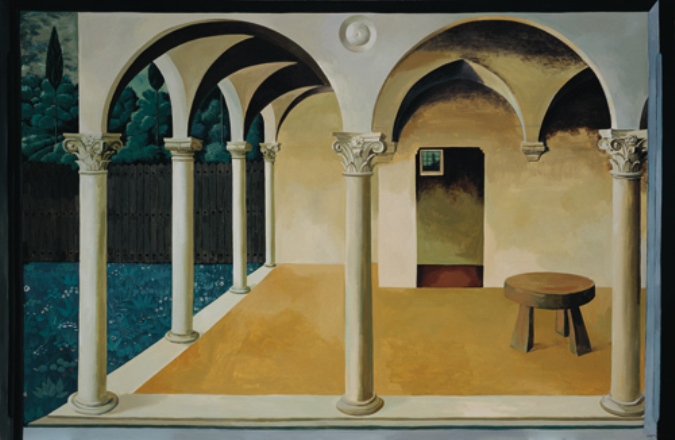 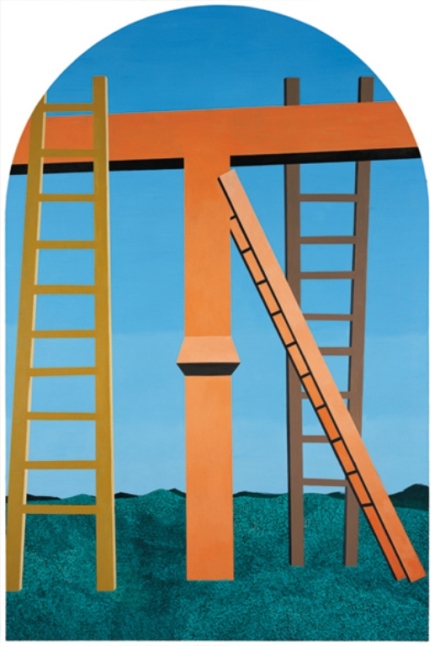 Yue Minjun, The Deposition from the Cross, 2009 via Pace Beijing

The Baptism of Christ (2010), the Resurrection (2010), and the Crowing with Thorns (2009) feature recognizable Christian emblems but Minjun incorporated his grinning characters into this imagery. The presence of these typified figures breaks the logic of Christian elements on Minjun’s canvases. In this way, Minjun presents historical data as the provisional interpretation of the past instead of treating them as facts. 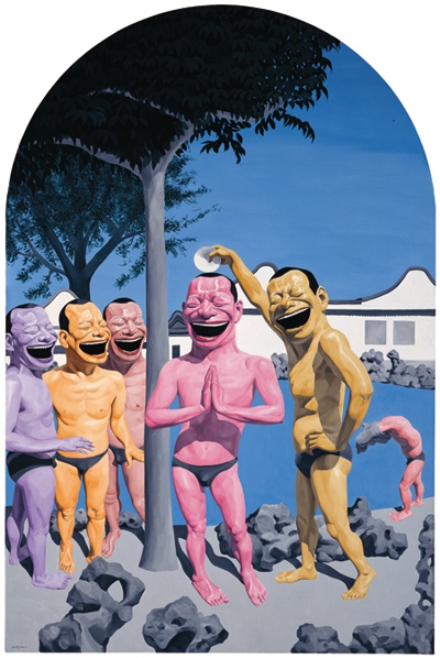 Yue Minjun, The Baptism of Christ, 2010 via Pace Beijing 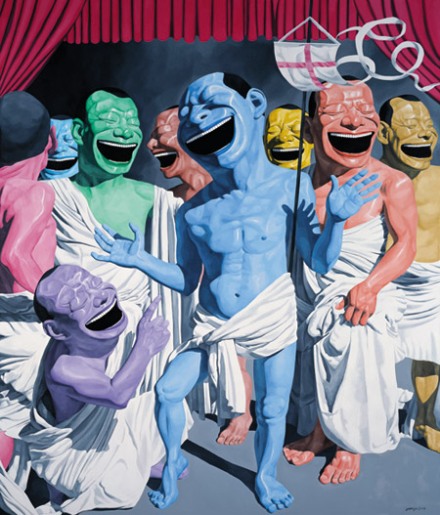 The theme of relationship between Eastern and Western cultures on Minjun’s canvases at the Pace Gallery may refer to the way the past is interpreted on both sides of the world. This approach seems to unify these two regions while making a strong reference to the possibility to interpret European tradition in multiple ways.

This entry was posted on Saturday, July 9th, 2011 at 12:54 am and is filed under Art News. You can follow any responses to this entry through the RSS 2.0 feed. You can leave a response, or trackback from your own site.