Go See – London: Joan Miró – The Ladder of Escape at the Tate Modern through September 11th, 2011

Installation view, Joan Miró: The Ladder of Escape (2011). All images via Tate Modern.

On view until September 11 at the Tate Modern in London, Joan Miró: The Ladder of Escape brings together work spanning six decades of the internationally renowned artist’s career. Organized with the help of the Fundació Joan Miró in Barcelona and the National Gallery of Art in Washington, this major retrospective is a rare opportunity to see over 150 paintings, sculptures, and works on paper culled from collections around the world, as well as five of his large triptychs in their first ever coincident display. In addition to an exceptional viewing experience, the Tate has set out to provide a political context for Miró’s work and thereby shed light on the esteemed Surrealist’s oft-overlooked engagement with and dedication to the world around him. 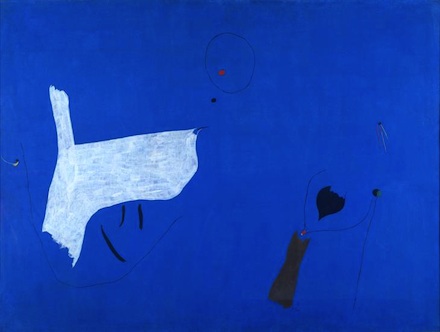 Called “the most surreal of us all” by André Breton, author of the first Surrealist manifesto, Miró’s imagery tends to be most enjoyed for its dreamlike innocence. Complicating this reception, Joan Miró: The Ladder of Escape brings the artist’s political passions to the fore. The exhibition is thus divided into three general historical periods in the artist’s life: the First World War and the period following it, the Spanish Civil War and beginning of the Second World War in France, and the time surrounding the 1968 uprisings on through Franco’s death.

Born in Barcelona in 1893, the first rooms of the retrospective center on Miró’s relationship with his native Catalonia’s struggle to preserve its distinctive cultural identity. These pieces are particularly from and influenced by the artist’s time on his family’s farm at Mont-roig—where he created The Farm (1921-22), a piece that he considered to be “a resumé of [his] entire life in the country”—as well as his first visit to Paris. As Miró’s time in Paris solidified his interest in Catalonia and his relationships with the early Surrealists there impacted his artistic style, he revisited much of his early Mont-roig work and reshaped it in this new light. One of his most famous pieces from this period for instance, The Head of a Catalan Peasant (1924-5), represents an identity besieged by the dictatorship of Miguel Primo de Rivera.

The middle rooms of the exhibition are primarily dedicated to Miró’s time in Paris during the Spanish Civil War during which he developed his iconic pictoral language. His 1937 piece Aidez l’Espagne (Help Spain), which was on display with his The Reaper (1937) and Picasso’s Guernica (1937), demonstrates the way in which his work, though abstract, remained politically charged. Indeed, despite the fact that he avoided exhibitions in Francoist Spain and displayed work almost exclusively through outlets in Paris and New York City, these middle rooms of the retrospective affirm Miró’s position as a key international figure of the interwar avant-garde.

The last section of the exhibition focuses on the decline and collapse of the Franco regime when Miró was in his eighties. Even as an older man the artist remained intellectually and politically engaged through his work. His triptychs during this period as well as his series of Burnt Canvases (1973) and found object sculptures, or Majesties (1974), attest to a life dedicated to challenging the status quo to the very last—even if abstractly and sometimes quietly. The title of his triptych The Hope of a Condemned Man (1973), for instance, refers to the execution of Catalan anarchist Salvador Puig Antich in 1974, while his Burnt Canvases realized what he called the “assassination of painting,” and his Majesties challenged the grandiose post-war monuments cropping up across Spain and Europe by elevating the ordinary to the ranks of the majestic. In their display of Miró’s triptychs from this time the Tate mirrored the chapel-like design of Miró’s first post-Franco retrospective, which was in the Fundació Joan Miró in Barcelona and planned with the help of the artist himself.

In providing  political context for the artist’s work, Joan Miró: The Ladder of Escape reinvigorates an already-legendary career with an element of gravity that ensures its relevance now and for years to come. As the artist said in acceptance of an honorary degree from the University of Barcelona following Franco’s death: “I understand that an artist is someone who, in the midst of others’ silence, uses his own voice to say something and who makes sure that what he says is not useless, but something that is useful to mankind.” The thirteen rooms of the Tate’s exhibit serve as testament to the artist’s sensitivity to the world around him and as a reminder that even for a most revered Surrealist, “the ladder of escape” toward creativity—a title that the exhibition has aptly borrowed from among Miró’s most utilized titles—is nonetheless deeply rooted in reality.

Hepatitis Weekly January 27, 2003 2003 JAN 27 – (NewsRx.com & NewsRx.net) — Results of a meta-analysis revealed that the effectiveness of the hepatitis B vaccine declines significantly with patient age.

“Hepatitis B vaccine is a key tool for the prevention of hepatitis B infection,” said David N. Fisman at the City of Hamilton Social and Public Health Services Department in Canada and colleagues in the United States and Australia. “Age-associated changes in immune function may contribute to decreased vaccine efficacy in older individuals, although research related to this topic has yielded contradictory findings. We performed a meta-analysis of 24 published trials and studies that evaluated the association of age with response to hepatitis B vaccine, using a random-effects model.” “Pooling of study results suggested a significantly increased risk of nonresponse to hepatitis B vaccine among older individuals (relative risk [RR], 1.76; 95% confidence interval [CI], 1.48-2.10). An elevated risk of nonresponse persisted even after exclusion of poor-quality studies (RR, 1.63; 95% CI, 1.23-2.15) and adjustment for publication bias (RR, 1.52; 95% CI, 1.26-1.83), and it was present even when ‘older’ individuals were defined as being as young as 30 years,” wrote Fisman and his collaborators. hepatitisbvaccinenow.net hepatitis b vaccine

The researchers concluded, “These findings have important implications for individuals at risk for hepatitis B infection, including health care workers and travelers.” Fisman and his associates published their study in Clinical Infectious Diseases (The effect of age on immunologic response to recombinant hepatitis B vaccine: A meta-analysis. Clin Infect Dis 2002;35(11):1368-1375). in our site hepatitis b vaccine

The information in this article comes under the major subject areas of Hepatitis Vaccine, Hepatitis B Virus Vaccine, Vaccine Efficacy, and Immunizations.

This article was prepared by Hepatitis Weekly editors from staff and other reports.

This entry was posted on Thursday, September 1st, 2011 at 4:55 pm and is filed under Go See. You can follow any responses to this entry through the RSS 2.0 feed. You can leave a response, or trackback from your own site.