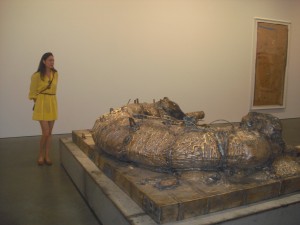 All images for Art Observed on site by Guillaume Vandame.

The Andrea Rosen Gallery currently presents its first exhibition of Sterling Ruby and Lucio Fontana, an adventurous juxtaposition of the hip contemporary Californian with the radical and aggressive 20th Century artist. Ms. Andrea Rosen, who kindly answered questions on the show, described how the inspiration for the exhibition came as a conversation with Ruby when Rosen was doing a group show of De Kooning, Fontana, and Eva Hesse in the fall of 2008. “We were talking about contextualizing Sterling’s work and Sterling had very much liked that show, in particular my relationship to those particular ceramics which hadn’t been shown very much,” Rosen said. “So we started with a discussion and it sort of evolved in a year long conversation about what we wanted to accomplish juxtaposing Sterling and Fontana.” 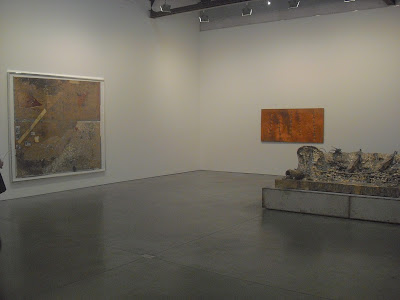 In the first gallery, the common themes of alchemy and nature become apparent through this juxtaposition. There is a certain unpredictability and recklessness that happens instinctively  through the symbiosis of Fontana and Ruby. Visitors are immediately confronted by a large bronze Fontana sitting on the floor. The work, Concetto Spaziale “Natura” (Spatial Concept “Nature”) (1961) depicts a sphere severed at the edge and forces the viewer to walk around the work to enter the space. One observation made on Concetto Spaziale “Natura” could be its demonstration of gravity and its universal force on both object and subject. At the corner of the space, a dazzling and much smaller Fontana ceramic sculpture sits on a pedestal adjacent to a large collage by Ruby featuring an image of Advil with splattered paint on cardboard. These three unsettling works evoke feelings both of anxiety and relief. 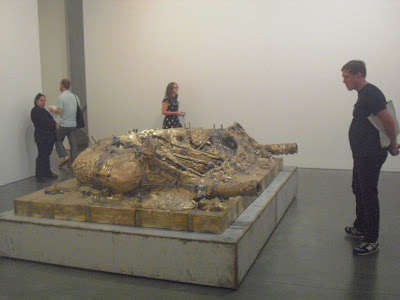 Entering the second gallery, Rosen cleverly spreads out seven much larger and dramatic works. This lofty space becomes a platform for Ruby’s striking sculptures which dominate the floor and tremendous copper pieces by Fontana juxtaposed with Ruby’s collages. Rosen introduces one of Sterling Ruby’s ceramic basins, which take various remains of ceramics and are re-fired to form one cohesive work. “Excavator Dig Site” (2010) seems to be most entrancing as a bold centerpiece, featuring fragments and objects coated in bronze on a stainless steel pedestal. Through the work, Ruby explores and exaggerates the raw and rough disciplines of how Fontana handles bronze and ceramic. 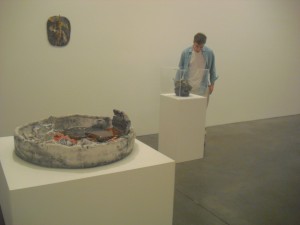 Andrea Rosen concludes the show with a third gallery exclusively displaying the sculptures of both Fontana and Ruby. This space is smaller, and as it may be inappropriate to include another work as massive and intrusive as “Excavator Dig Site,” Rosen makes use of this space by only showing ceramic works by the two artists. Through this final analysis, the contextualization of Ruby with Fontana becomes much more understandable, featuring ceramic works by Fontana similar to the first space and Ruby’s ceramic basin in the second space. 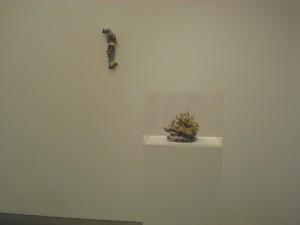 Rosen creates new relationships between these two artists and, “The purpose of the show,” she says, “is to allow people to expand their perceptions, and I feel really that the show does that, and I think people are able to expand their vision through their enthusiasm around the work.” 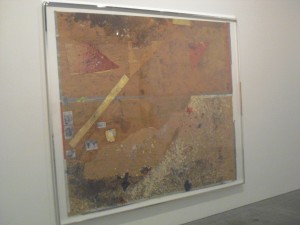 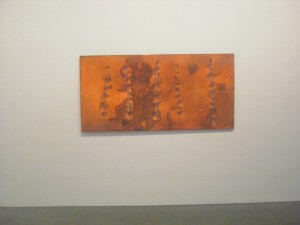 Sterling Ruby was born in Bitburg, Germany in 1972. He holds a BFA from The Art Institute of Chicago and an MFA from the Art Center College of Design, Pasadena CA and currently works in Los Angeles, California. He has had solo shows at the Museum of Contemporary Art, Los Angeles and is recently featured in the group show, The Shape of Things to Come, currently at the Saatchi Gallery.

Lucio Fontana was born in Rosario Santa Fe, Argentina in 1899. Fontana studied at Academia di Brera and is known for his involvement with Spatialism and Arte Povera. He was awarded the Grand Prize for Painting at the Venice Biennale of 1966. His work has been shown extensively and has had recent solo shows at the Galleria Nazionale d’Arte Moderna (GNAM), Rome in 2008 and the Estorick Collection of Modern Italian Art, London in 2007. Fontana died in 1968 at age 69 and his legacy continues with La Fondazione Lucio Fontana, based in Milan. 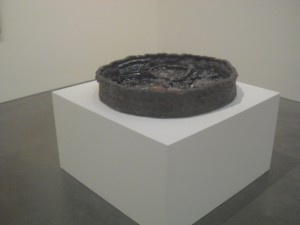 This entry was posted on Wednesday, October 19th, 2011 at 11:46 pm and is filed under AO On Site, Art News, Go See. You can follow any responses to this entry through the RSS 2.0 feed. You can leave a response, or trackback from your own site.