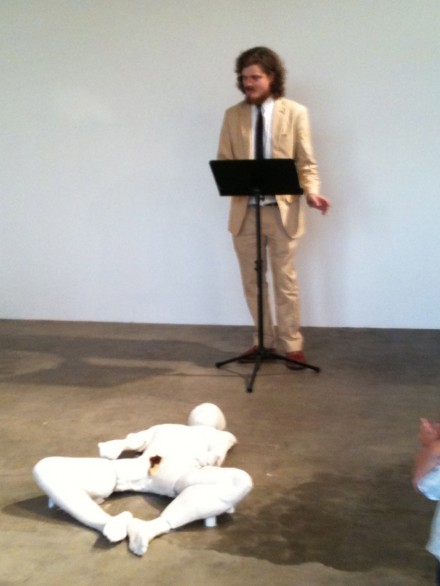 Stuart Watson, The hostess never lies (2011). All photos on site for Art Observed by Tara Sheena.

Agathe Snow’s monologue, The hostess never lies, was the finale event of the Vogt Gallery’s performance series of the same name. Curated by Snow’s sister, Anne Apparu, the series emphasized artists working in the medium of performance art and offered a platform for the presentation of works at all stages of their development. The original inspiration for the entire series, this was the first live performance of Snow’s monologue. 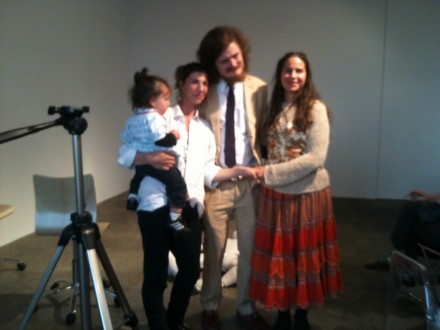 Born and raised in Corsica, France, Snow works in many media forms and is known for her apocalyptic and satirical themes. One of her best-known shows is No Need to Worry… The Apocalypse Already Happened, which debuted at the James Fuentes Gallery (NYC) in 2007, as well as a 2008 feature in Elle magazine, about her lifestyle expertise and culinary artistry.

Snow’s presentation at the Vogt Gallery marked the first time her theatre work was performed in a public space. Performed by New York-based actor Stuart Watson, the monologue depicts a female character experiencing a manic recollection of her life’s events, both trivial and monumental. On an apparent precipice of insanity and composure, the main character recounts her life’s purpose in a series of musings that are, at times, questioning, at times, assertive, but always filled with a suppressed void of emotion that can only be found after years and years of living. 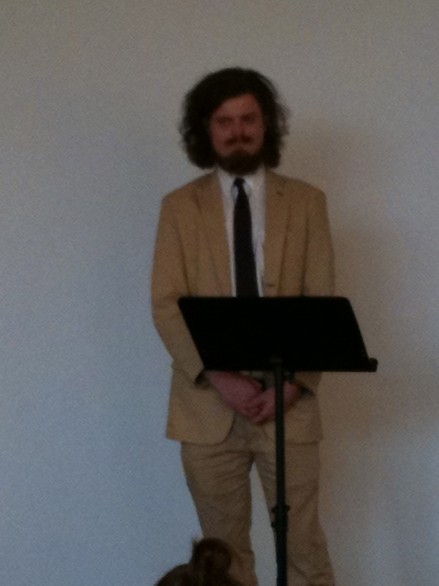 This performance series is only the second curated performance art series at Vogt Gallery. Since opening earlier this year, the gallery has established itself as a platform for mid-career and emerging performance artists to display their work, as well as propagate further audience discussion of performance art. Run by Johannes Vogt and Fabian Bernal, the gallery reflects their varied artistic backgrounds as well as their dedication to—as their press release states—draw “attention to the complex artistic and cultural ties that bind New York to both Europe and Latin America.”

German-born Vogt and Colombian-born Bernal bring years of experience in the art world to their first foray into the NYC gallery scene. Vogt was a Munich-based curator and art enthusiast before coming to New York, completing his MFA at Ludwig-Maximilians-University. Bernal brings experience spearheading many art initiatives in the Washington D.C. area before co-founding Vogt. He is responsible for establishing D.C. Performance Week as well as D.C. Design Week.

This entry was posted on Wednesday, November 9th, 2011 at 12:12 pm and is filed under AO On Site, Events. You can follow any responses to this entry through the RSS 2.0 feed. You can leave a response, or trackback from your own site.