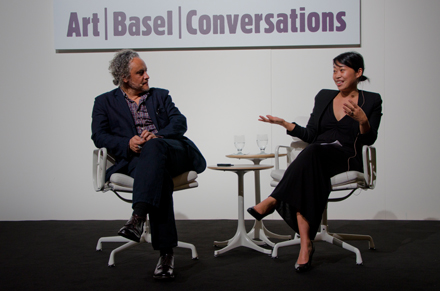 All photos by Caroline Claisse.

On December 1st Mexican-born artist Gabriel Orozco sat down with Michelle Kuo, Editor-in-Chief of Art Forum, kicking off the series of “Art Basel Conversations” in Miami this week. The yearly panelist series begins each fair with an actual artist contributing to the conversations, and Orozco’s multicultural influence and Latin American roots suited this year’s intent to bridge global connections. The artist’s focus skirted his Tate Modern retrospective that debuted in January, reflecting instead on the metacognitive forms of recognition and orientation in his work, most notably life-size Corplegados, or “folded bodies,” on site at Basel, and later on the archaeologically excavated whale skeleton work, Mobile Matrix (2006), and the recast skeleton of Dark Wave (2006). 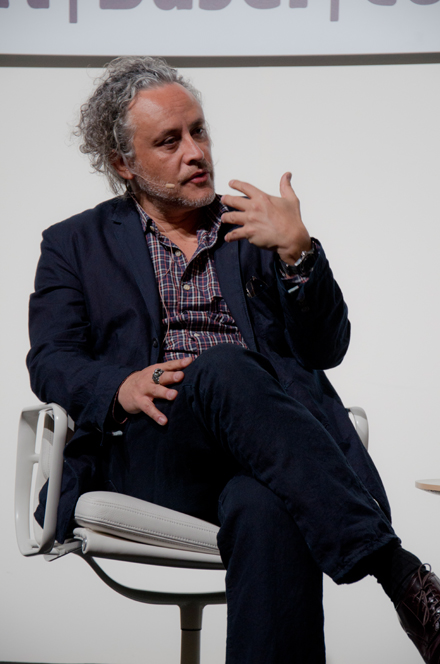 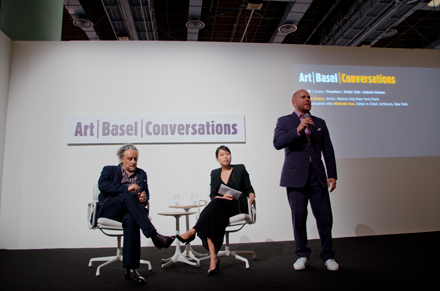 Over the last four years of travel, Orozco found himself consistently redrawing on the same papers, folding and refolding them until he had completed twenty, some of which took up to two years to make. Now titled Corplegados, they serve to represent fragments of maps and moments, combining to function ideologically as loose pages of a book. At the fair, two are displayed at Marian Goodman, and two at Chantal Crousel. They are showcased in double-sided glass to reveal both the recto and verso. Orozco used the back for corrections and studies, but the “accidents,” as he called them, “are also interesting.”

Orozco’s work is inspired by the deconstruction he finds in the divergent work of Piet Mondrian and Gustave Courbet, arguably cryptographic in the way it filters and recalibrates both the logical and the poetic—two realms which serve to divide Orozco’s artistic thought process. The logical is rooted in neuroscience and ecologies, in which the artist seeks to generate a tangible, personally workable ecosystem. In this way, the ecosystem of connections evolves to sustain and justify the artistic process. Orozco questions art forms and forums to validate his materials. When the art literally works and settles into a personalized platform, it factors into the universe as a functioning entity.

Logical thinking informs Orozco’s work through his influential relationship with developing technology, which he compared to the onset of photography in the 19th century, and later television in the 1960s and ’70s. Citing antecedents of pointillism in the work of Georges Seurat and Roy Lichtenstein, the tactile processes of the Corplegados also spring from the movement to digital printing. Although the folded drawings use the physicality of offset printing, the experimentation with new materials and processes touches on the ephemeral in lieu of digitalization. 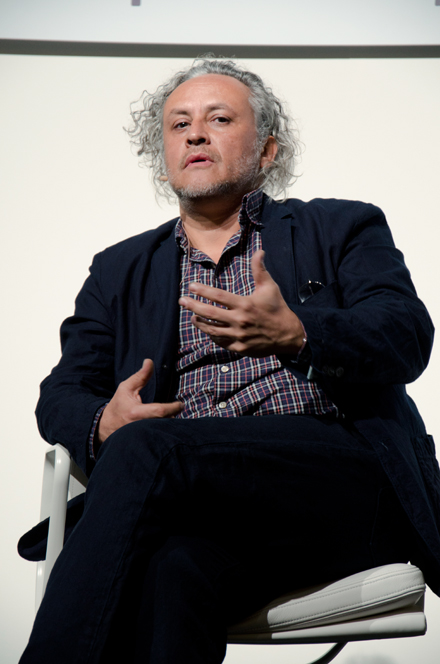 Despite the more tangible basis of the logical thought process, the poetic process approaches more introverted sources of filters, and emotional response. Filters of culture, time, and memory inform not only the viewer’s reaction to the work, but also the reaction of the artist. Orozco cited the example of trees: aesthetic depictions of trees often look similar, because, as he told Kuo, “You just see what you understand.” The poetic highly influenced Orozco’s artistic process for the Corplegados, with the folding paper referencing the abstraction of folding and unfolding memory.

In the cases of Mobile Matrix and Dark Wave, the excavation process and drawn skeletal patterns testify to the logical element in Orozco’s work. The scientific, exacting reactions both to the tangible and to abstract charts and graphs function in relationship to archaeological relevance. Mobile Matrix now permanently resides as an installation at the José Vasconcelos Library in Mexico City, to be used as an instrument of knowledge as much as aesthetic.

In terms of his retrospectives, the initial, temporal reaction maintains its significance. Orozco’s noted major experiment with temporal transcendence is his 1993 work, Empty Shoe Box, which is simply an open white shoebox, with the lid encasing the bottom. First displayed at that year’s Venice Biennale, Orozco felt it was the right gesture for such a potentially definitive international exhibition. Whether a bronze or a shoebox, he explained, “nobody knows how long the meaning of a work will last.” 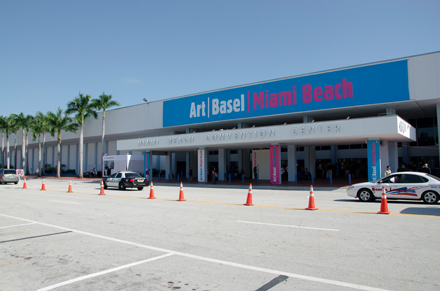 This entry was posted on Saturday, December 3rd, 2011 at 2:10 am and is filed under AO On Site, Art Fair, Art News. You can follow any responses to this entry through the RSS 2.0 feed. You can leave a response, or trackback from your own site.