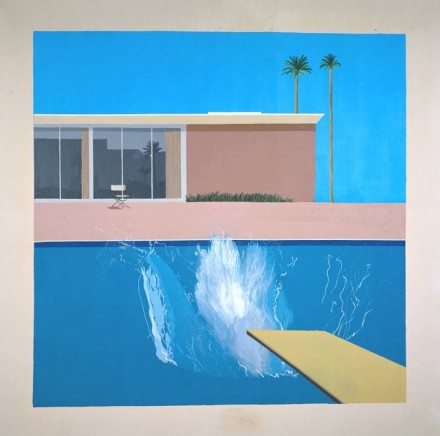 David Hockney, A Bigger Splash (1967). All images via Artnet.

Not only is the Getty the hub of activities for the Southern California-wide Pacific Standard Time (PST) programming, but it is also host to a number of events and exhibitions, including Greetings from L.A.: Artists and Publics, 1950-1980, From Start to Finish: De Wain Valentine’s Gray Column, In Focus: Los Angeles, 1945-1980, and performances for the Performance and Public Art Festival that will take place later in January. It has also mounted the large-scale, historical exhibition Pacific Standard Time: Crosscurrents in L.A. Painting and Sculpture, 1950 -1970. With 79 works by 47 artists, the exhibition charts the unique artistic innovations that have come to define the Los Angeles art scene as well as helped to shape some of the most important art movements from the second half of the 20th century.

Although not the first large exhibition to attempt to chart this history—institutions from the Los Angeles County Museum of Art to the Georges Pompidou Center in Paris have also undertaken the challenge—Crosscurrents is perhaps the least overwhelming. In part this is because the exhibition does not carry the burden of covering everything. As one exhibition amongst over 50 that are taking place within the scope of PST, the Getty’s show has the opportunity to focus in on a particularized history: experiments, developments, and cross-influences in painting and sculpture. 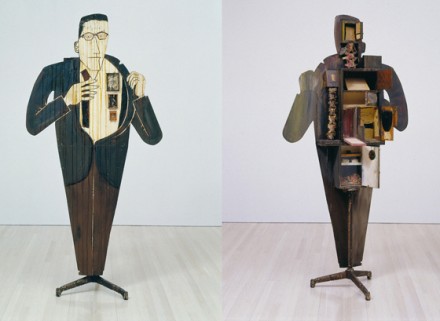 Broken into five modest-sized gallery rooms and loosely organized by theme (although there are many overlaps stylistically and chronologically throughout), the exhibition includes well-known works from L.A. assemblage, California minimalism (also known as Finish Fetish or the L.A. Look), and L.A. Pop by globally recognized figures such as Judy Chicago, Richard Diebenkorn, Sam Francis, David Hockney, Ed Kienholz, Ed Moses, and Ed Ruscha, to name only a few. From Ed Ruscha’s Standard Station, Amarillo, Texas (1963) and The Los Angeles County Museum of Art on Fire (1965-68) to David Hockney’s A Bigger Splash (1967), there is a great amount of iconic works. 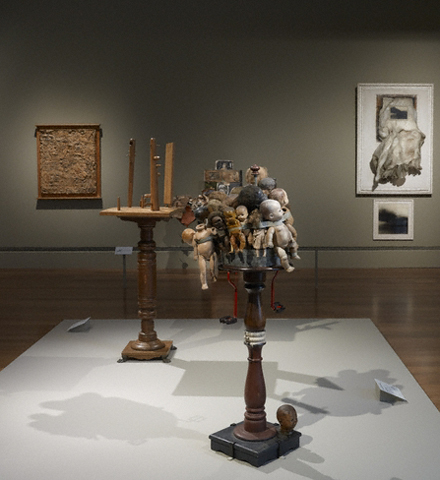 Installation view of L.A. assemblage works (pictured here are works by Ed Kienholz in foreground and Wallace Berman in background). 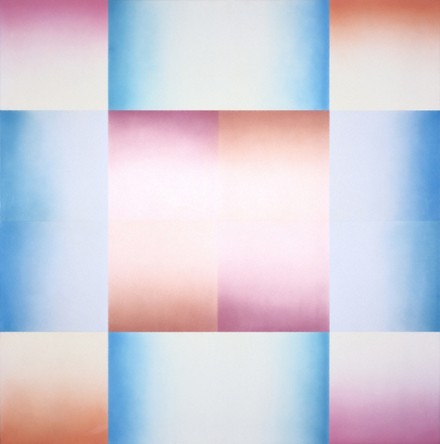 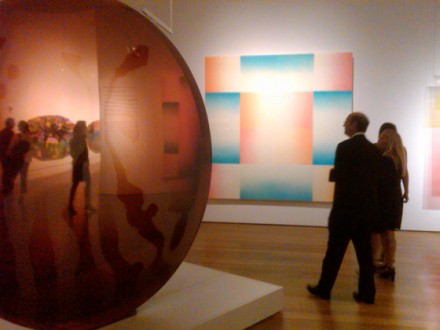 Installation view of ‘L.A. Look’ works (pictured here are a De Wain Valentine in foreground and Judy Chicago in background).

What could quickly spiral into a list of greatest hits from the L.A. scene remains grounded, though, through its startling juxtapositions—the Ruscha and Hockney pieces are displayed alongside the process-oriented abstractions of Diebenkorn’s Ocean Park series and the rhythmic abstractions of John Altoon—as well as its keen focus on other, lesser known parts of the region’s histories such as, for instance, their notable inclusion of ceramics on the west coast. In addition to treading the familiar territory of L.A. Pop and its heavily circulated images, Crosscurrents also relates the history of experimentation and transformation of “craft” into sculptural art form in the non-traditional, large-scale ceramic works by artists John Mason, Ken Price, and Peter Voulkos. The intense exploration of and experimentation with material properties by these early figures help to frame the later perceptual and material investigations of California Minimalism, which appear in the works of Peter Alexander, Larry Bell, Craig Kauffman, and John McCracken. 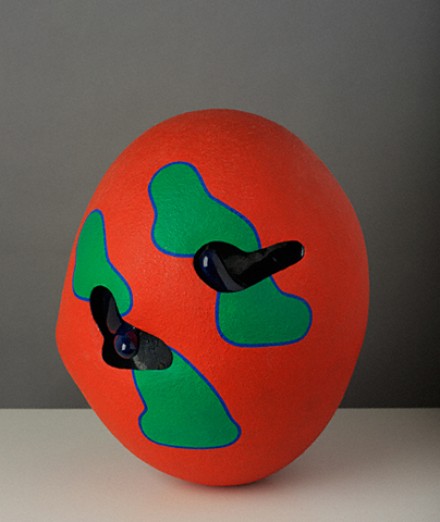 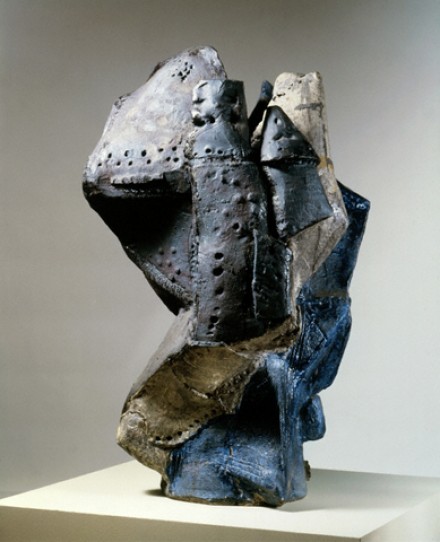 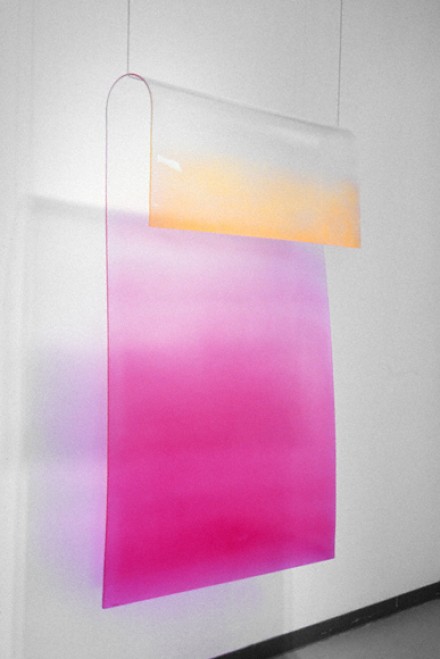 The exhibition is up in Los Angeles through February 5, 2012 and will then travel to the Martin-Gropius-Bau in Berlin where it opens March 15, 2012.

Chicago Tribune (Chicago, IL) January 30, 2006 | Sherman, d Byline: Ed Sherman CHICAGO _ Al Michaels said he didn’t want to be the story during the Super Bowl this week. Then he went out and made himself the story.

During a conference call Monday, Michaels was grilled from all directions about his status for next season. He has signed a contract to be ESPN’s play-by-play voice for “Monday Night Football” in 2006, but there’s speculation that Michaels wants out of the deal so he can join his current partner, John Madden, for NBC’s coverage of Sunday night games, which begins in the fall.

Michaels could have defused all the talk simply by saying, “I’m not going to NBC. I intend to do the Monday games for ESPN next season. End of story.” Instead, Michaels danced around the issue. At one point he said he didn’t want to sound like “a State Department official,” only to come off like a State Department official doing his best to avoid giving a candid answer.

“I’m preparing for the Super Bowl,” Michaels said. “I don’t want to be part of anything that detracts from the telecast. Next season starts next week.” Later, when Michaels was asked why he wouldn’t just deny the NBC rumors, he said, “Whatever I address, it gets parsed up in many different ways, and everyone will run with it.” Michaels, though, provided plenty to run with. Clearly he is having second thoughts about the ESPN deal. It seems obvious he is going to explore getting out of his contract and jumping to NBC. The process might already be in progress.

During the summer, Michaels rejected NBC’s bid to join Madden. The offer was said to be for $1 million less than the $4 million he is set to receive from ESPN. go to web site michaels printable coupon

Michaels also said that his heart was with “Monday Night Football,” where he has made the calls since 1986. It sounded good at the time.

But Michaels is no dummy. Despite ESPN’s insistence to the contrary, NBC’s deal with the NFL appears to be the more attractive prime-time package. site michaels printable coupon

NBC, not ESPN, will get the coveted flexible schedule, which ensures the network will show competitive games late in the season. NBC also will air wild-card playoff games and has the 2009 Super Bowl. ESPN won’t cover any postseason games.

Michaels, 61, has a considerable ego, just like the rest of the top-tier broadcasters. He doesn’t want this to be his last Super Bowl.

If Michaels wants out, ESPN probably would be willing to let him go. Already, there are reports that Mike Tirico will fill the Monday play-by-play slot, and that “Pardon the Interruption” co-host Tony Kornheiser would be brought in to join Joe Theismann in a three-man booth. Also, it is telling that NBC Chairman Dick Ebersol is holding the chair open for Michaels. He says he won’t make a decision until after the Olympics.

Thursday games The NFL Network will air a package of eight late-season Thursday and Saturday games beginning in the fall, the league announced over the weekend. The inaugural game will be Thanksgiving night. Indications are there will be five Thursday night games and three Saturday night games.

The move was made to increase the distribution of the league’s NFL Network. Currently, it is available in 30 million homes, mostly on digital tiers. The NFL now will ask cable operators to make the network part of their package.

The league is counting on fans’ demand to persuade the cable operators, but there is the risk of oversaturation here. Madden noted one of the beauties of the current format is that fans chew on the Sunday and Monday games for an entire week. He fears the Thursday games could change the dynamic.

“I don’t want us to be like college basketball where there is a game on every night,” Madden said. “That’s the direction we seem to be going in. I’m not sure that’s the right direction.” Woods scores The Tiger Woods factor kicked in big time Sunday for CBS. The final round of the Buick Invitational did a 5.9 rating in the major markets (one ratings point is worth more than 1 million homes).

The rating peaked at 9.4 during Woods’ playoff with Jose Maria Olazabal and Nathan Green. That’s a Masters number. There is little wonder why the PGA Tour is glad to have Woods back.

This entry was posted on Thursday, January 12th, 2012 at 8:05 am and is filed under AO On Site, Art News. You can follow any responses to this entry through the RSS 2.0 feed. You can leave a response, or trackback from your own site.