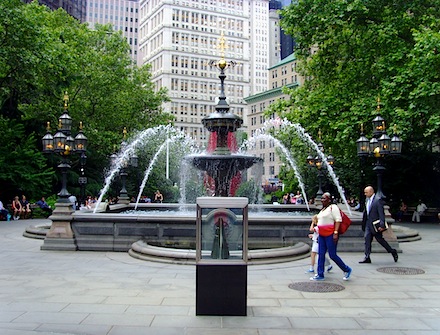 For the coming summer and fall months, Public Art Fund has organized “Common Ground’, an outdoor exhibition of sculptural and performance artworks.  Ten international artists were asked to present installations currently dotted around the historic center of City Hall Park in downtown New York.  The exhibit debuted May 24, and will remain on site for visitors until the end of November. 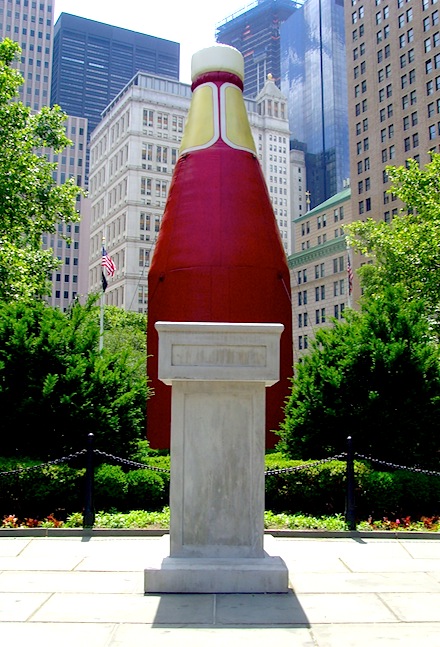 The exhibition idea is believed to have originated from the Occupy movement and the activists that set up presence immediately outside the park only a year ago.  The concern preached was the criminal conversion of public property into private, or a reduction of the “commons” as The NY Times styles.

“Common Ground responds to the many layers of [City Hall Park’s] rich historical context and reveals how a work of art that articulates an artist’s personal vision might also be thought of as having a civic function, value, or engagement” (Public Art Fund). 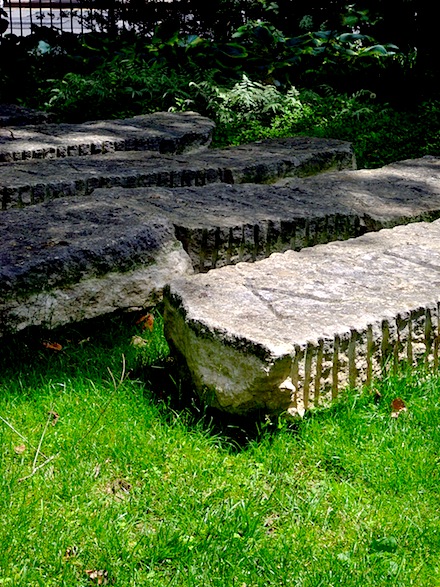 Scottish Artist Ian Hamilton Finlay’s 1990 arrangement of stone blocks lay out on the grass near the park entrance.  The slabs are inscribed with Latin translations of an excerpt from French revolutionist Louis de Saint-Just, reading in English as, “The present order is the disorder of the future”. 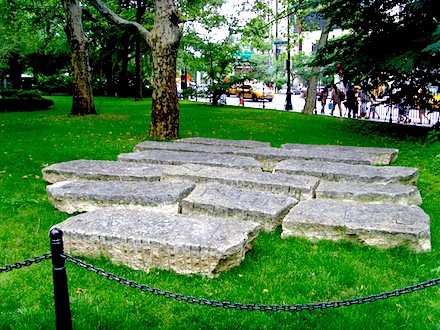 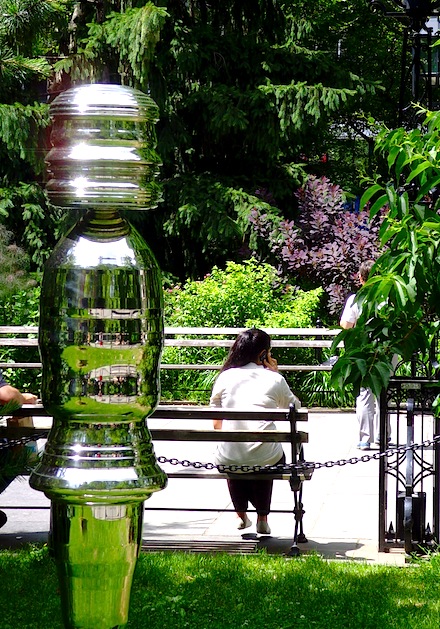 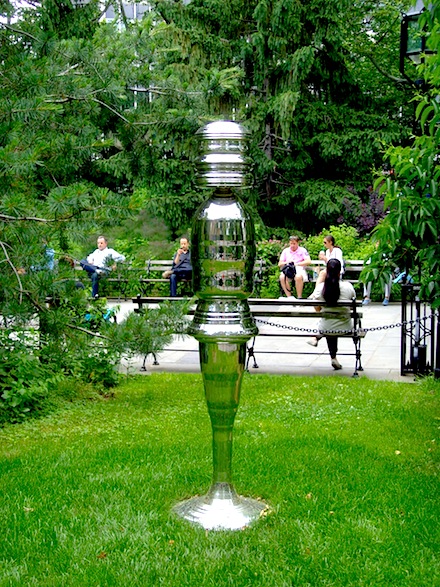 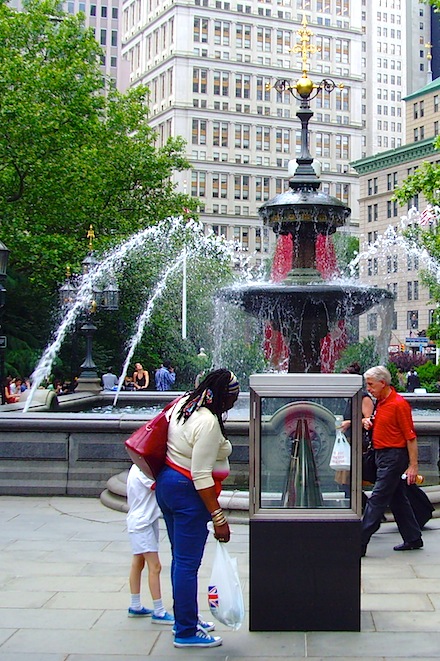 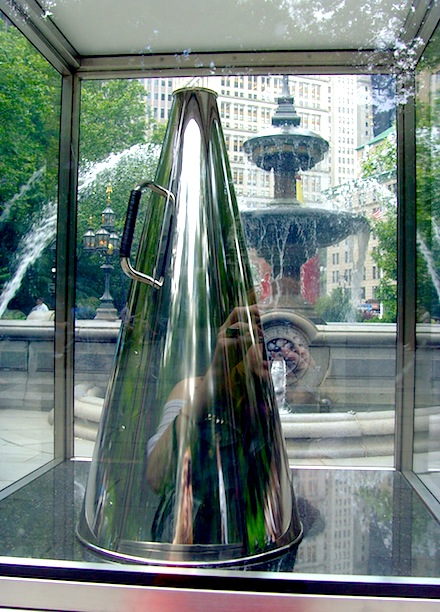 Elmgreen & Dragset’s aluminum megaphone features a joint performance where a young man pulls out the form from its glass vitrine and exclaims, “It’s never too late to say sorry”, also the installation’s title. 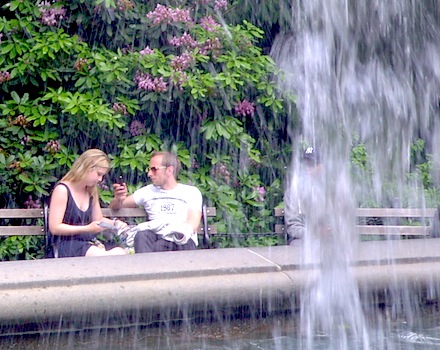 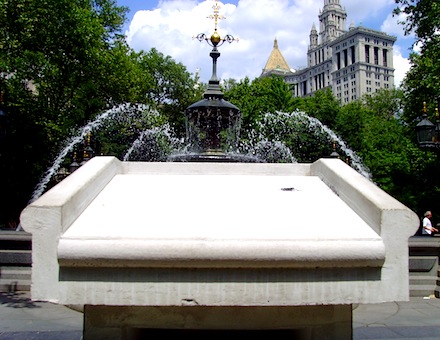 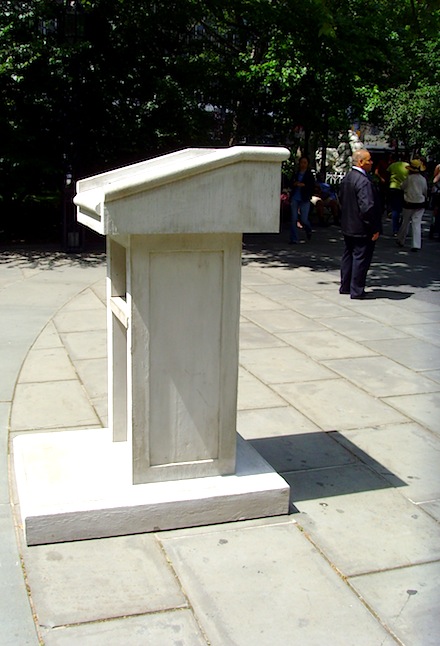 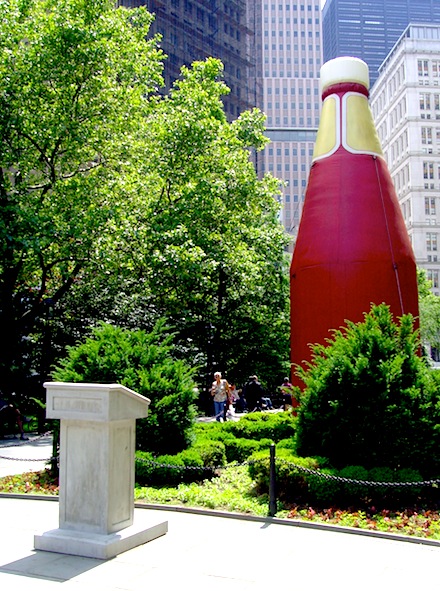 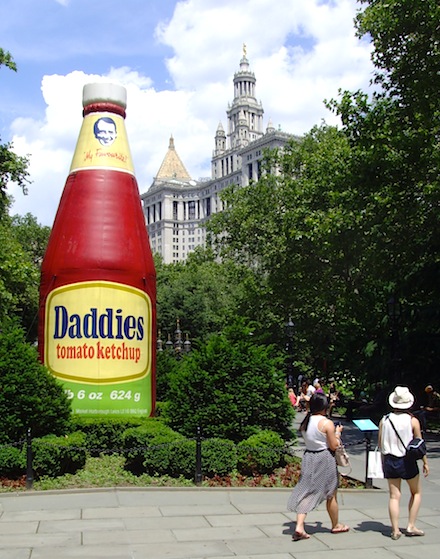 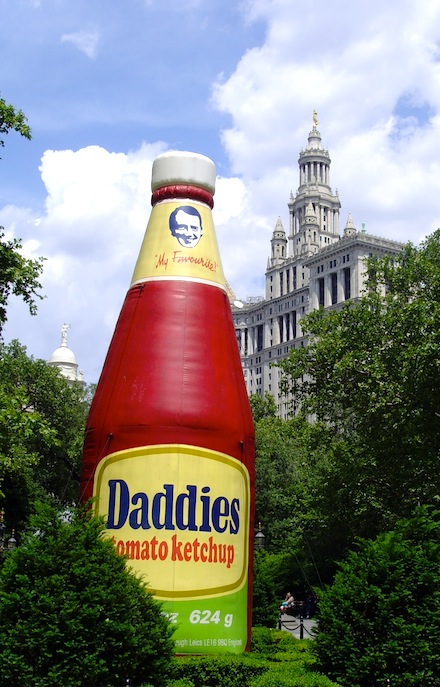 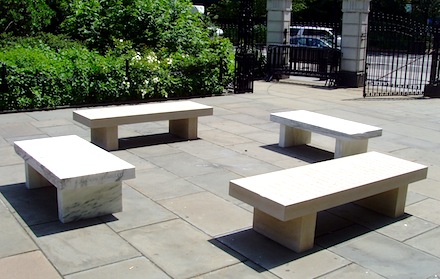 Four benches by Jenny Holzer, two of marble and the others of sandstone, bearing solemn inscriptions 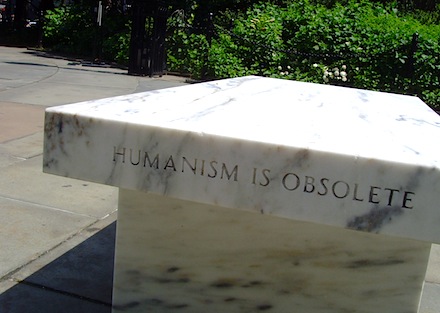 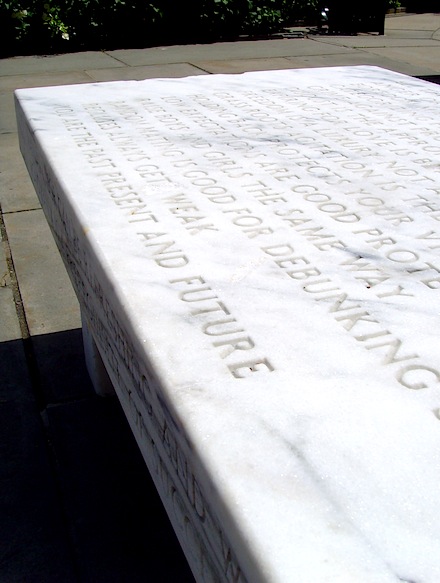 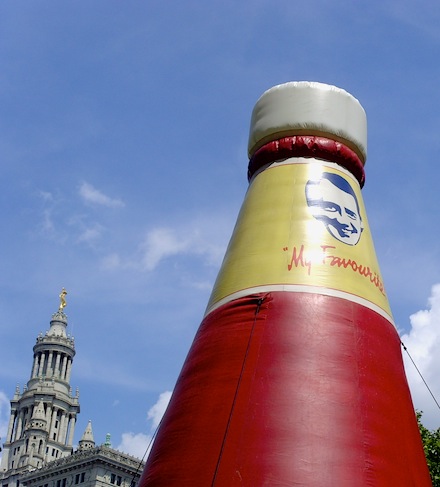 Another view of “Daddies Ketchup” 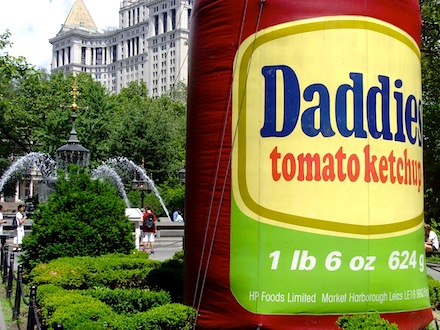 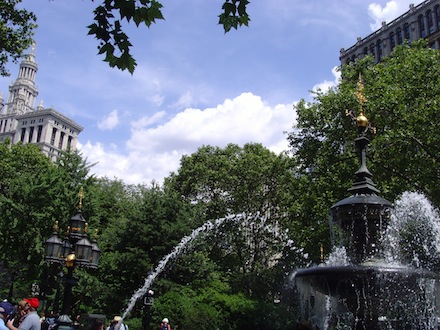 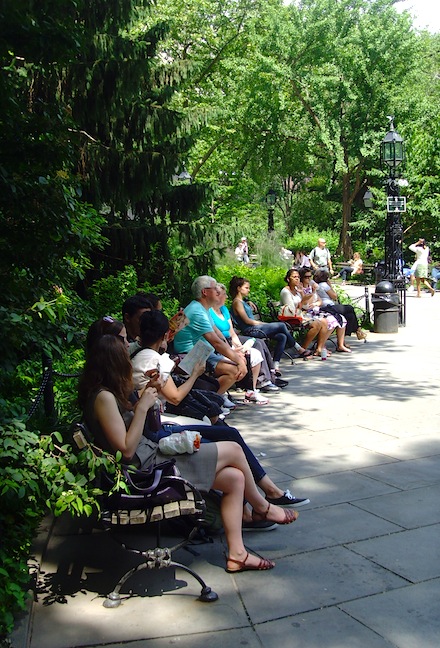 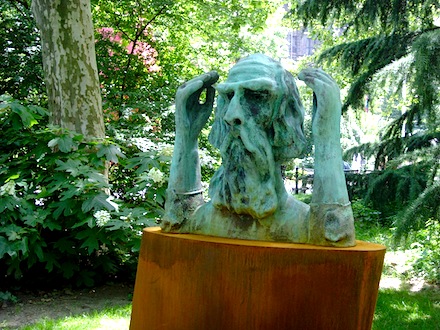 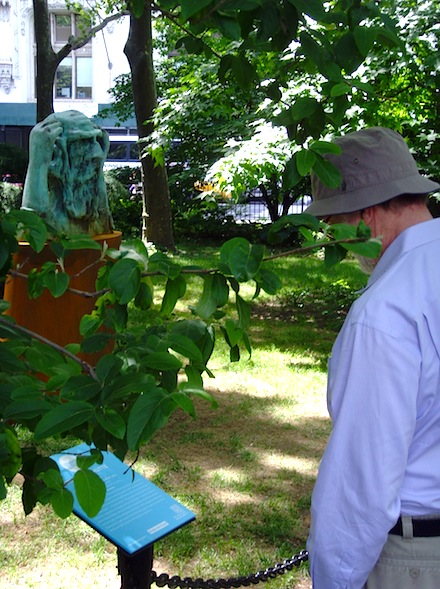 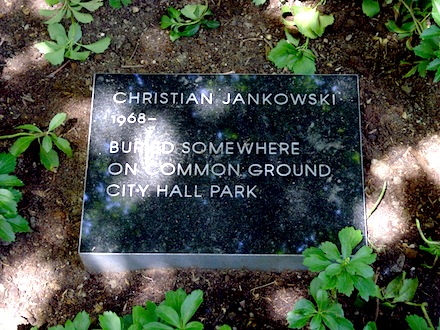 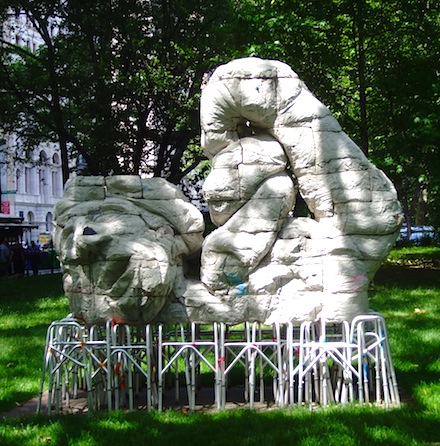 Justin Matherly’s “New Beaches” (2012), an installation involving a concrete sculpture atop a collection of metal walkers 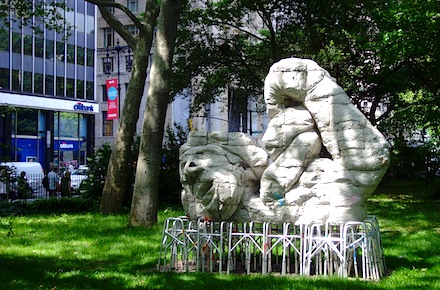 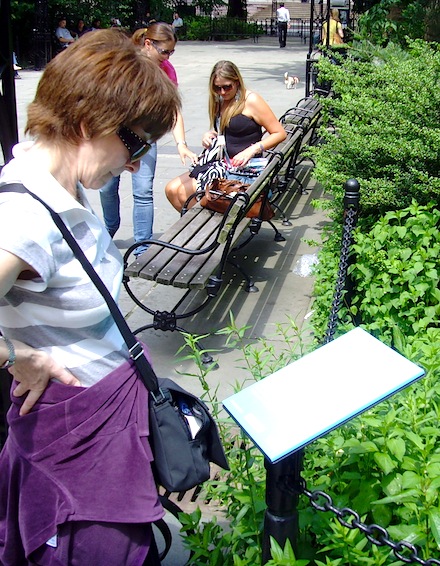 Britain’s Roger Hiorns (not pictured) also contributed to the exhibition with a singing performance by local youth choir groups near the park’s southern exit.  Also to be found is a simple bronze plaque dedicated to political journalist Deb Myers, on which is written, “Do the right thing and nine times out of ten it turns out to be the right thing politically”.

This entry was posted on Thursday, July 5th, 2012 at 1:13 pm and is filed under AO On Site. You can follow any responses to this entry through the RSS 2.0 feed. You can leave a response, or trackback from your own site.