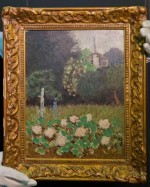 Henri Matisse’s Le Jardin, which has been missing for over 20 years and is currently valued at $1 million, has been recovered from a dealer in Essex. The oil painting was stolen from Stockholm’s Museum of Modern Art in 1987, and its journey from Stockholm to Essex remains somewhat of a mystery.  “Stolen artworks that are recognisable change hands often so there is no knowing where it has been in the intervening two decades.”  Says Christopher A. Marinello, executive director and general counsel at the Art Loss RegisterRead more via The Independent

This entry was posted on Monday, January 7th, 2013 at 3:18 pm and is filed under Art News. You can follow any responses to this entry through the RSS 2.0 feed. You can leave a response, or trackback from your own site.