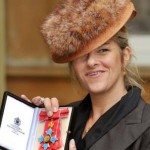 Tracey Emin has been honored with a CBE (Commander of the British Empire) for her contributions to the arts.  Emerging as a leading member of the UK’s 1990’s contemporary arts scene, Emin was recognized for her ongoing contributions to British culture.  “Its amazing that I’ve been given this because its recognition for what I believe in and what I’ve worked for, so it’s a great feeling,” she said.

This entry was posted on Sunday, March 10th, 2013 at 4:30 pm and is filed under Art News. You can follow any responses to this entry through the RSS 2.0 feed. You can leave a response, or trackback from your own site.