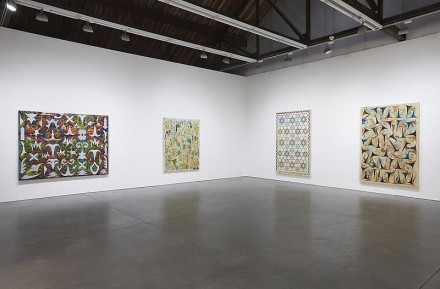 Recent work by Philip Taaffe is currently on view at Luhring Augustine gallery in Chelsea, New York, marking Taaffe’s first solo show of paintings in New York since 2007. Culling together a diverse set of influences and materials, the works on view unveil Taaffe’s explorations of imagery in art, architecture, and archeology, both in contemporary and historical contexts. 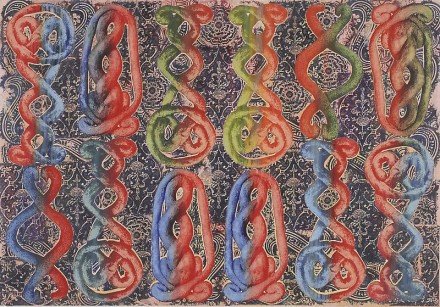 Born in Elizabeth, NJ in 1955, Taaffe is a longtime New Yorker, graduating from Cooper Union and soon after making his home in the city, where he still lives and works. His work hs been included in museum exhibitions including the Carnegie International, the Sydney Biennial, the Whitney Biennial, the Kunstmuseum Wolfsburg, the Irish Museum of Modern Art, Dublin, the Museum of Modern Art New York, the Solomon R. Guggenheim Museum, the San Francisco Museum of Art, and the Reina Sofia, Madrid. 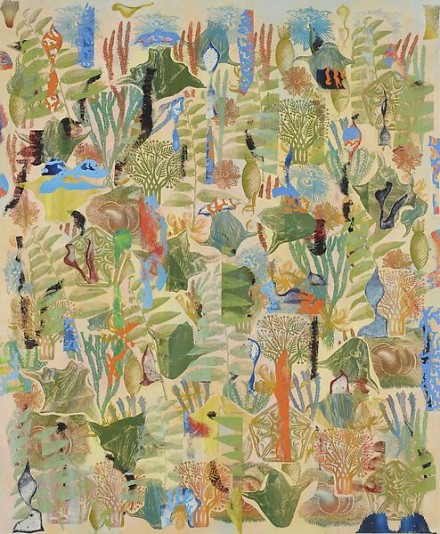 This exhibition is a continuation of Taaffe’s combinations of the carefully meticulous geometries and free painting which have characterized his work throughout the years. Using tools such as linocuts, hand-drawn relief plates, silkscreens, and stensils, and techniques such as paper marbling and gold leaf, Taafe achieves a final product stuck between mathematical form and total abstraction, while bringing the affective properties of each element to bear on the canvas. Requiring a tense focus, his working style has been compared to the preparation of medieval manuscripts, continually redrafting and manipulating the canvas until it reaches its complex, multilayered final form. 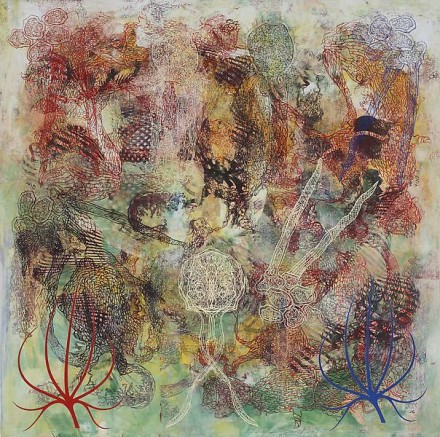 The current set of work on display includes elements drawn from natural history illustrations, Roman mosaics, microscopic images of Viking artifacts, Syrian embroidery patterns, Mongolian masks, and calligraphy. Taaffe said about painting, “I think the power and possibilities for painting today has to do with binding it to a cultural legacy…painting is where these symbolic languages or forms somehow crystallize and reveal their ancestry…” Fascinated with the devices and forms used throughout history, Taaffe employs antiquated, time-consuming techniques to create modern, progressive works of art laced with deep personal and historical meaning, while still managing to retain a vibrant contemporary energy. 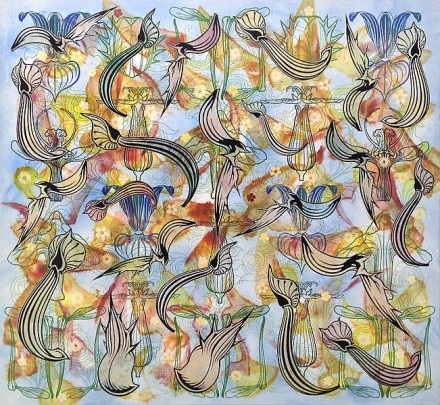 This approach, culling from the broad collections of world art and design, brings a diverse flavor to Taafe’s works, each work engaged in an internal conversation with the origins of its elements.  Exceptionally singular, Taafe’s far-reaching aesthetic exercises make for a varied creative output.  His current show of work is on view until June 15th. 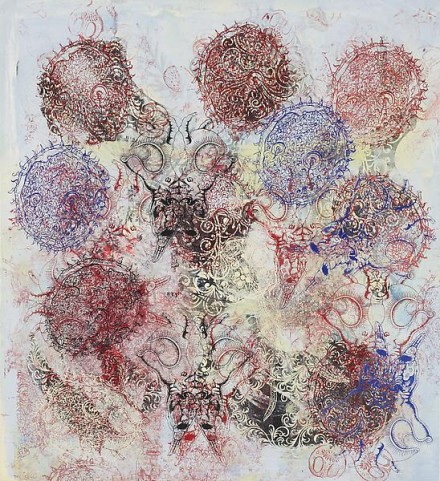 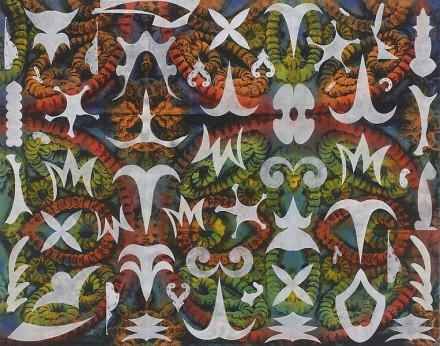 This entry was posted on Saturday, June 8th, 2013 at 9:50 am and is filed under Art News. You can follow any responses to this entry through the RSS 2.0 feed. You can leave a response, or trackback from your own site.