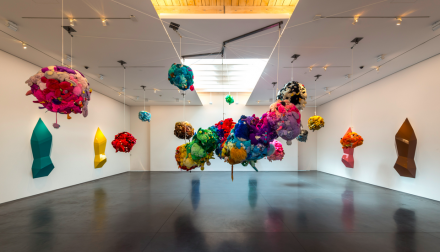 It’s hard to decide just where to begin with the monumental Mike Kelley retrospective currently on view at MoMA Ps1.  The blockbuster exhibition takes up all four floors of the museum, and spans his full career, from his early video and performance work through to some of the last installations and pieces he made before he tragically took his own life in 2012 at the age of 58.  All of his immediately recognizable works are on view, including Deodorized Central Mass with Satellites, his Kandor series (recreating the miniature home city of the Superman mythology), and his sprawling masterwork, Day is Done from 2005-2006, all brilliant entries in Kelley’s signature inquiries into the American mythos.

Mike Kelley, Mike Kelley as The Banana Man (1981), © Estate of Mike Kelley Photo: Jim McHughFew subjects are spared Kelley’s signature reapportioning throughout the show: literature, film, sound art, pop music, classical composition, education, sex, death, ghostly possession, pornography and the art world itself are each skewered in their own turn, warped into bizarrely complex assemblages by the magnitude of their collision.  An early participant in the potent Michigan rock and roll scene that gave the world Iggy Pop, Kelley brought a fierce, uncompromising perspective into the world of contemporary art, often bringing him face to face with its worst habits. 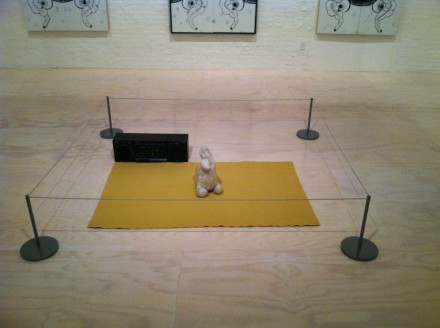 Few artists have ever been able to approach the human body in the manner that Kelley does, plotting it out as the site of conflict for contemporary society, a place of social coercion and violent trauma, vulgar gesture and unresolved desire.  From the jarring on-screen injuries of Horizontal Tracking Shot of a Cross Section of Trauma Rooms to his earlier video works downstairs, and even into his early performances, Kelley tugs at the threads of stress and alienation imposed on the psyche. 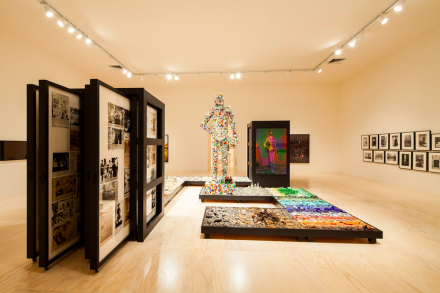 Combining physical interaction with heavy sensorial stress, Kelley, much like his occasional collaborator Paul McCarthy, forces new readings of cultural tropes and the rare combination of both physical and mental memories.  Of particular note is his Rose Hobart II, a bizarrely shaped sculptural installation, welcoming viewers to climb through its narrow ends, brought finally to a small peephole through which they can view a slowed down version of the raunchy sex-comedy Porky’s, all the while scored by a jarring Morton Subotnick composition.  The result is a harrowing, emotionally fraught experience, where the visitor finds themselves almost unable to turn around and leave in the cramped quarters, realizing they may be stuck in this nightmarish fusion of sound, image and space.  Minutes after leaving the piece, one can still feel their heart beating. 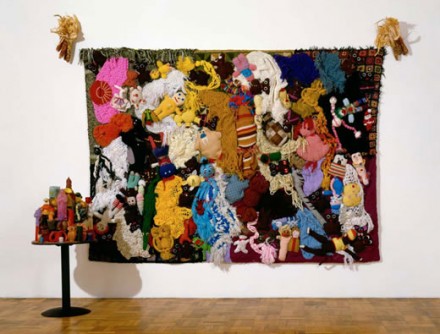 Mike Kelley, More Love Hours Than Can Ever Be Repaid and The Wages of Sin (1987), Courtesy of MoMA Photo Matthew Septimus

The violent socialization of contemporary life is frequently returned to in Kelley’s work, both in image and thematics.  The aforementioned Day is Done charts the disturbing forces of social power on the body, showing children traumatized by barbers, devilish figures, KISS fans and prom-goers all compiled into a dizzying portrait of Americana, all societal impulse included.  But its also in these confrontations that Kelley is at his strongest, playing off the conforming forces of society with his own brand of irreverent aggression.  The results are moments of bizarre delicacy, where we are able to look past the distorted frame to see the human subjects at play in all their insecurities and sadness.  Kelley feels for his subjects, but but forces the viewer beyond simple pathos in favor of heavily mediated pop iconography and skewed Americana.  Stuffed animals spew melodramatic monologues, lost youth is portrayed alongside raunchy sex magazines, and the American high school becomes a site of howling feedback and vulgar sexuality. 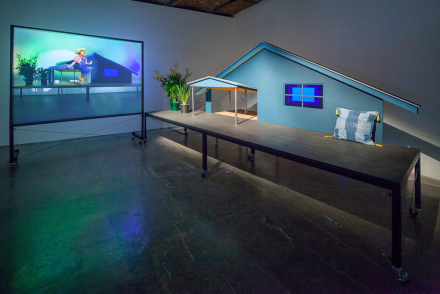 These works reflect only a fragment of the pieces on view, and viewers may find themselves daunted by the sheer magnitude of the show, if only for the demanding nature of Kelley’s work.  His America is one of confused Id, perpetuating itself with a throbbing, furious persistence, punctuated only with the occasional novelty of its own bizarre permutations.  Its in these moments that the artist seizes on, turning the situation inside out to reflect its own inner narratives.  It’s a landscape that feels neither foreign or fully familiar, a world that’s often harsh and abrasive, but one that provides ample moments for pause and reflection.  It’s this ability that marked Kelley as a true visionary, and which makes his absence equally difficult.

Kelley’s retrospective is on view until February 2nd. 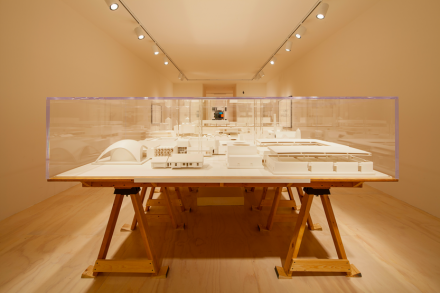 This entry was posted on Wednesday, November 6th, 2013 at 12:00 am and is filed under Art News. You can follow any responses to this entry through the RSS 2.0 feed. You can leave a response, or trackback from your own site.