Leading the top lots in both houses are two works by the late Alberto Giacometti, both from 1954.  At Sotheby’s, his bronze bust, Grande Tête Mince (Grande Tête De Diego) is hoped to realize between $35 and $50 million. This work is a quintessential example of his style of sculpture from this period, with its kneaded texture and quiet emotionality, and is modeled from the visage of Giacometti’s own brother.  At Christie’s, Diego en chemise écossaise, yet another rendition of Diego, is estimated to achieve between $30 and $50 million. This work of art, however, is a painting rather than a sculpture. The painting is a superb specimen of Giacometti’s deeply layered, ashy-hued brushwork. Much like the bust offered at Sotheby’s, both portraits gaze unflinchingly back at the viewer.

Pablo Picasso dominates the top lots at both houses, with three paintings in the top ten highest estimates at Christie’s and two at Sotheby’s. Leading the pack at Christie’s, in addition to adorning the catalogue’s cover, is a large, late Picasso painting from 1963, titled Le peintre et son modèle dans un paysage. Its chalky and evergreen palette, punctuated with yellow, depicts the artist rendering a nude model in the studio, all in Picasso’s signature spatial deconstructions. This work of art is anticipated to sell for $25 – $35 million.

At Sotheby’s, Tête de femme, priced at $20 – 30 million, is an exceptional and highly chromatic portrait of Picasso’s infamous lover, Marie-Thérèse Walter. This small painting from 1935 foreshadows the sculptural busts of her that were created later in the decade. Christie’s is also offering its own portrait of Marie-Thérèse Walter, from 1937, titled Femme au Béret at au Col de Fourrure (Marie-Thérèse) for $8 – $12 million. By contrast this portrait is less vibrant and exhibits an immediacy in the brushwork, perhaps attributed to the fact that it was painted in a single day. Additionally, Picasso’s Mousquetaire à la pipe, from 1969, is on the block at Sotheby’s and is expected to gross $12 – $18 million. This painting is also from the later part of Picasso’s oeuvre and was also painted in a single day.

At Christie’s, there is an exquisite portrait titled Monsieur Baranowski by Amedeo Modigliani, from 1918. The portrait is of a young artist, who made his exodus to Paris. Christie’s catalogue includes this compelling quote regarding the portrait: “Who was Monsieur Baranowski? One of the hundreds of artists and intellectuals who flocked to Paris from Eastern Europe, most of whose talents were to remain unrecognized, their dreams unfulfilled.” This somber and sensitive work is anticipated to garner $25 – 35 million.

Giacomo Balla’s Futurist work, Automobile in Corsa, is among other notable highlights at Sotheby’s.  A black and white oil and ink work by the artist, it is to be shown at the Guggenheim in early 2014 for a Futurist exhibition. It is estimated at $12 – $18 million. 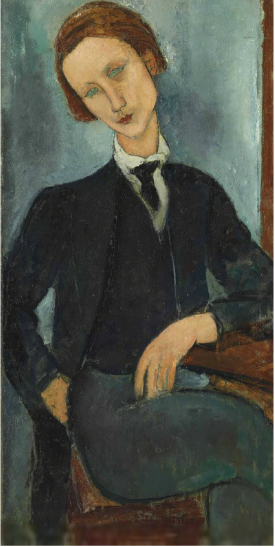 An additional gem at Christie’s, is Guitare Sur Une Table by Cubist Juan Gris. This is a museum quality example of a fully realized Cubist work by the artist, as well as a prime example of the movement. It is priced at $10 – 15 million.

The auction events will begin tomorrow night, and Art Observed will be on hand, covering the sales live on our Twitter and Instagram accounts.

This entry was posted on Tuesday, November 5th, 2013 at 7:52 am and is filed under Art News. You can follow any responses to this entry through the RSS 2.0 feed. You can leave a response, or trackback from your own site.