February 24th, 2021
REFERENCE LIBRARY
Home » Glenn Ligon on Having his Work in the Presidential Collection

Glenn Ligon on Having his Work in the Presidential Collection 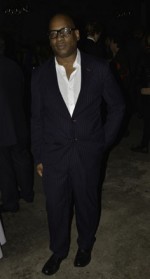 Glenn Ligon is interviewed in The Independent this week, as the artist prepares to open a new show at Thomas Dane Gallery in London, and recounts an experience meeting President Barack Obama, in which the president told the artist he owned several of Ligon’s works.  “I thought to myself, ‘the President of the United States knows what’s in his house,'” he says. “It’s not just decoration. He looks at it and knows when it’s not there. It was touching to realize that visual art is an integral part of his and his family’s life. It’s not just window dressing, not something you have to talk about because people expect you to. It was a really great way to meet him.”

Read more at The Independent

This entry was posted on Wednesday, March 12th, 2014 at 9:21 pm and is filed under Art News. You can follow any responses to this entry through the RSS 2.0 feed. You can leave a response, or trackback from your own site.