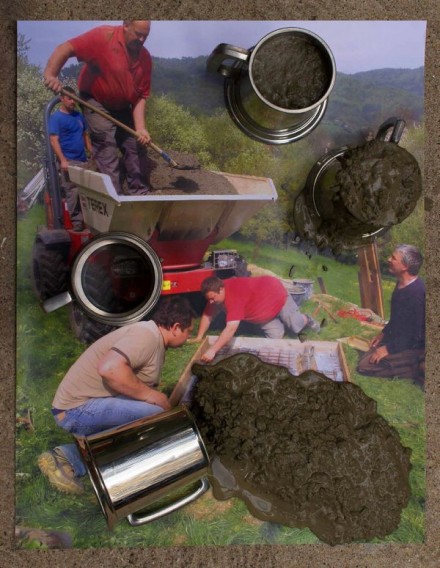 Late this week, amid the hustle and bustle of Armory Week in New York, The Kitchen will open artist Aki Sasamoto’s newest performance, Sunny in the Furnace, running from March 6th to the 8th in the organization’s theatre space.  Incorporating Sasamoto’s playful, intricate series of object-oriented encounters and reflections, the work will see her expand her practice onto a larger scale, incorporating the work of fellow artists Sam Ekwurtzel, Jessica Weinstein, Pau Atela, and Madeline Best, as well as live music by percussionist John Bollinger. taking Sasamoto’s recurring focus on memory and material to new levels of complexity.

Aki spoke with Art Observed this past week to preview her show, and talk a bit about her personal creative process.

AO: I was wondering if you could perhaps talk about the work itself: what can guests expect, especially compared with past projects?  Where did the piece originate from?

AS: Sunny in the Furnace exists as a meeting point for a performance artist/sculptor (Sasamoto) another sculptor (Ekwurtzel), mathematician (Pau Atela), actor (Jessica Weinstein), lighting designer (Madeleine Best), and a drummer (Bollinger).  It is a meeting point for these individuals as well as their mediums that I unapologetically typecasted here.  So those people who know my solo work in visual art context can expect to see how I interact with others in this theater piece, those who know me in performing arts context can look at the line up and expect more texts to follow than usual.

In terms of the contents, I let my mind do automatic wandering for a while, and fish up the subject matter a month before the production to see any combination of subjects will work for the final show.  That way, a performance production takes on a role of a summary of my current state of mind.  For a performance show in a theater, I do this type of wandering for much longer, so the piece encompasses multiple topics that I have been interested in from the last year.  Themes emerging alongside this harsh winter may give it more of a sense of struggle than usual.

I am also open to bringing in topics and sculptures that I have been working on in visual arts and other performance settings in this past year.  Sometimes those elements gain new lives, if I find compatibility with other elements in the production.  I am working with two people I have never worked with before, so it is possible that it has a different air.   I am also bringing a few things from 2013 into the theater this coming week, to test out their theatrical capacity. 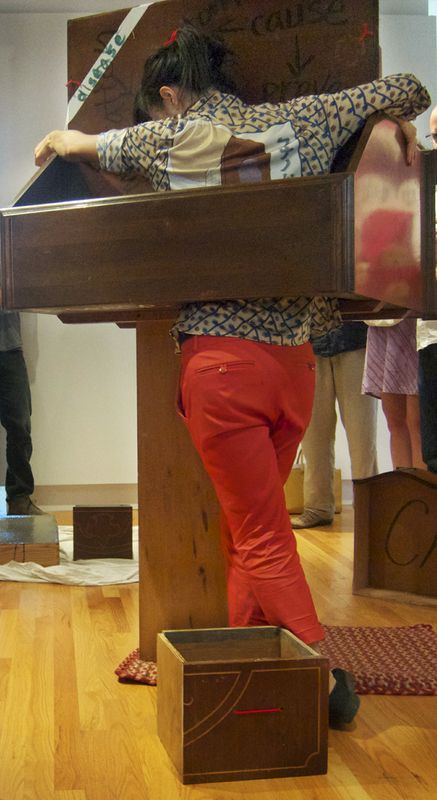 AO: The project does take on more of a theatrical element to it work than past work you’ve done, both in initial tone and presentation.

AS: I’ve made performance/installation works in both theater and visual arts contexts.  So in the spectrum between a theater show and a gallery performance, I can be flexible, making decisions to take on or deny its theatricality, depending on the nature of the space and contents.  For this show, I have made some decisions that may make it read as more theatrical.  One is collaboration and another is the shape of the theater.

When I am making a piece supported by a theater, I take liberty in inviting more collaborators and make a live show that utilizes manners and cultures of theatrical productions, such as working with a lighting designer, inviting performers from different mediums like music, dance, or theater.  Even when I am making the project’s direction pretty much in a similar manner as whenever I had made my own performance work, it inevitably spins out of the look of solo performance when I am working with others.  So perhaps, that’s contributing to the theater look.  I also embrace a certain kind of adrenaline lush during a production week in a theater, from planning with the theater staffs to scheduling every aspects of production week.

Another element is, the theater at the Kitchen is a black box theater of a good size, that can make any piece look more theatrical than usual.  I have decided to go with the relationship this theater proposes between the performers and the audiences.  I have been enjoying the intimate relationships that galleries and alternative spaces provide for my performance.  I am using this production to keep the audience in the chairs on the riser, and allowing for the audience to voyeuristically leap into a theatrical space without confronting me one foot away. This may be successful, or it may fail, but it is certainly proposing an interesting challenge for me. 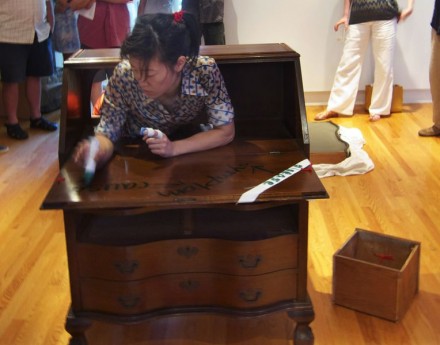 AO: It feels like there’s almost an improvisatory nature to the work then, or at least space for open encounters between parts of the work?

AS: Yes, you will definitely sense that the work has been just made, but while I don’t practice repetitive rehearsals, it doesn’t necessarily mean I’m going for complete openness, either.  Instead of setting up a pure improvisational encounter, I do spend time planning conceptual directions with myself, my objects, and other performers.  I single out each element or collaborator, and I pretend I am the most narrow minded, judgmental person, in order to squeeze out the essence of each relationship.  And then once all elements get together in the theater, I turn up the volume of openness in thinking of the ways to put those together.

AO: There seems to be an interest moving through your work in geometries and physics, like you place a certain geometry quality to “the curve of routines,” or past works have references to centripetal force and velocity.  I’m curious how or why these principles appeal to your practice?

AS: I find geometries and mathematical concepts as good metaphors for feelings.  Perhaps because I am not a language expert, I have hard time choosing the right words to grasp certain emotion.  Hence I throw in a parallel line, like floating theory or geometry, in a hope that it may cause a catalysis to unfold a emotional thread hidden in the piece.  I do this for me to make sense of my life, my piece.  When it works for me, I hope the sense of parallel lines causes some kind of resolutions in the audience as well, however distant as it may seem.  I always look for such alignments that at first seem unrelated, but somehow connects in another dimension.

AO: Your mentioning dimensions and parallel lines seems interesting, as it seems so much of the work is sort of intended for parallel thought, for multiple points of entry or connection  It’s almost like you’re maintaining an open space for the audience to draw their own conclusions or impressions.

AS: I do like works that permit my own mental meanderings, and perhaps because of that, I would like to make works that have multiple entries and exits.  Being time-based, I am sure there will be a visible ending to the piece, but my hope is that one or many images or feelings would stick to a audience and get cooked differently in their memory bank.  I hope it speaks to some audience in an unexpected, tangential way.  Sometimes, I have second or third thoughts about a novel I had read when I was younger.  That is the kind of reaction I would love to instigate through presenting a work. 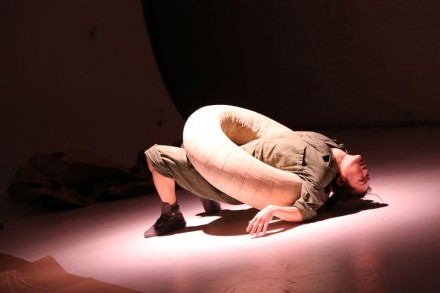 AO: Maybe in the sense that these elements and the roles of the performers are allowed to interact and change, you could almost look at the piece as creating an arena of sorts.  There’s something very free-form to the event as you describe it, almost athletic.

AS: It’s sort of like an Italian Piazza.  All the narrow paths converge at the open plaza.  It feels like a great openness after the narrow guidance of each of those little streets.  I find it celebratory to work like this in the theater, meeting other bodies, interacting with all the objects in motion.  Concentrated populations and movements create what I call celebratory, what you call athletic.

AO: Similarly, I’m curious as to how you see your works relating to the passage of time?

AS: My work deals with narratives in non-linear manner, so I guess that means it has something to do with a linear narrative, the passage of time. 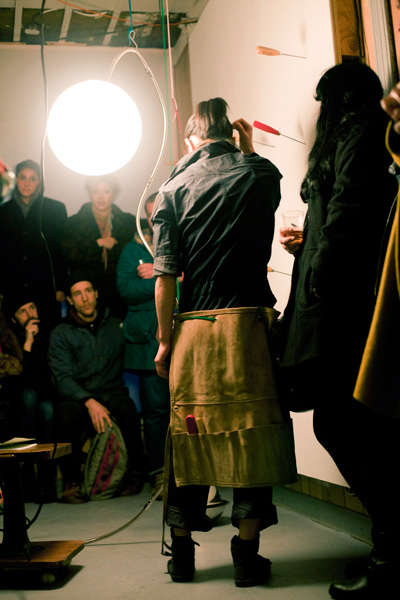 AO: You’ve worked with Sam Ekwurtzel before, and he’s creating sculptures for your upcoming piece, could you talk about how his vision fits into your work?

AS: As an object maker, I respect the process of Mr. Ekwurtzel.  He is knowledgeable of raw materials and goes through a very involved process of bringing those together into a piece of contemporary sculpture.  I often use found objects and materials that have stains from everyday life, and like to work improvisationally.  I’m interested in the distance between our materials and methodologies, since we can share rigorous sculpture debates and understandings, while having such different material interests.  Similar to everyone else I approached for this show, I have requested him to exaggerate his characteristics, away from what I am as an artist.  He pushed his sculptures towards a bigger and more raw presentation, so that our voices compliment each other instead of mingling.

Pau Atela is also a part of this production, and Atela, Ekwurtzel, and myself have been exchanging ideas concerning how math, sculpture, and art interact.  For the timber sculptures in this show, we have found a meeting point between the shape Atela proposed, the mechanisms and processes Ekwurtzel engineered, and a theatrical use I have assigned.  I am enjoying this type of fluid communication between works of my friends. 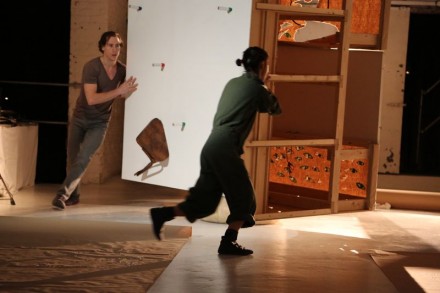 AO: I was hoping you could talk about your materials a bit as well.  Your performances seem to hinge partially on the interaction of material properties (sound, feel, etc.).  How do you view putting together your pieces using these elements?

AS: I am thinking about suicide, catastrophe theory, ways to lead life with charisma vs strategy, the idea of hardworking.  In turn, I’m using concrete, office chairs, clementines, instrument and furniture pieces I found in street.   But as I said earlier, the piece exists among elements other people bring as well.  I have been figuring out how to incorporate Mr. Bollinger’s drumming sensibility to the piece in particular.

Making sense of each element happens while I perform.  Or in the week of production at the earliest.  So it is hard to say how these elements hinge off of each other before the first show.  But since there are quite a few people involved in this show, I have been trying to propose some directions before the day of performance.  It’s like putting puzzles together.  I am proposing that a certain piece fits here and not there for instance, but I may change it all after we get into the theater.

This entry was posted on Thursday, March 6th, 2014 at 12:00 am and is filed under Art News. You can follow any responses to this entry through the RSS 2.0 feed. You can leave a response, or trackback from your own site.