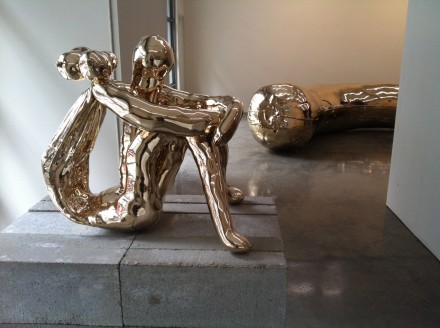 Britain introduced many significant female artists in the 90s during its highly touted YBA (Young British Artists) era, woman who presented feminine sexuality not as an object, but as a subject in itself. Commonly interpreted as a tool or a meta for male artists, female sexuality was reformed into ‘a maker’ that creates art alongside a group of female artists (with inspirations from pioneers such as Louise Bourgeois or Georgia O’Keeffe), instead of being the object that the hand works on. Artists like Tracey Emin, Sam Taylor-Wood and Sarah Lucas presented bodies of works that came from the essence of being a woman by explicating femininity in unorthodox ways. 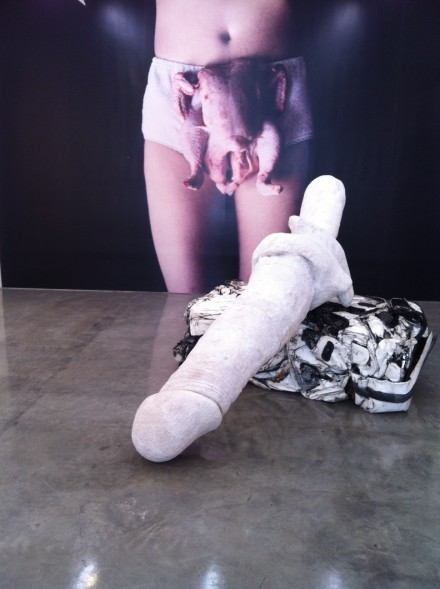 Continuing this tradition, Gladstone Gallery is currently hosting Nud Nob, Sarah Lucas’ first US exhibition in almost a decade, by bringing together a group of works that range in size and medium, all focused around the dichotomy of human sexual organs and their implications for identity construction and cultural signification. Lucas’ signature style touches upon matters such as gender, sensuality and identity throughout the exhibition that spans four rooms inside the gallery. 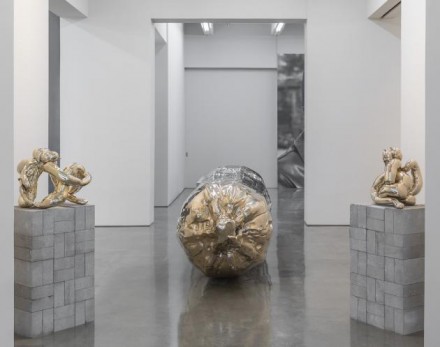 The work that greets the visitors is Dacre, one of several small cast bronze sculptures Lucas created by using stuffed stockings as molds. Carrying a frosty elegance along with its own intrepid intimacy, these sculpture pose in undeniably animated sensual positions. While almost all of the sculptures in this series posses a feminine physicality and posture, one of them stands out with a massive phallus and an arguably masculine posture. Titled as Patrick More, the sculpture is placed in a separate room from the other similar sculptures and holds on to its swaggering attitude as it spreads its legs to point out its masculinity. 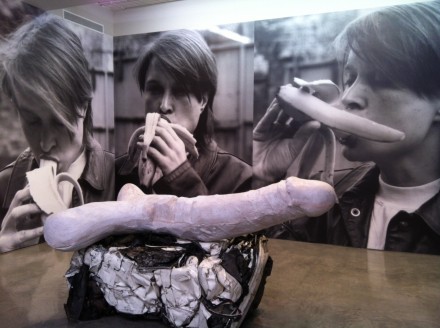 Sexual human anatomy is a major part of the exhibition, so much that Lucas presents two large size cast concrete penises leaning on pedestals made of compacted crushed cars. These two phallic sculptures and the car cubes that they graciously lean on perpetuate a strong masculine discourse through the expressiveness of male genitalia as well as masculine undertone of the automobile culture. On the other hand, titled as Eros and Priapus these sculptures tie references to the Greek gods of love and fertility while the cars that support them evoke an argument of modern day masculinity. 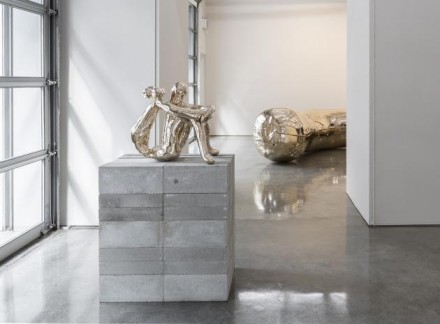 Behind these hefty forms, Lucas places humorous and (when considered together with the phallic sculptures) gender-vocal photography works. In the center of Chicken Knickers, one of these digitally printed photos, is a raw chicken with its feathers plucked, sitting on a woman’s crotch, almost as if waiting to be cooked. Strategically placed to cover the female organ, the chicken causes irritation as well as risibility. 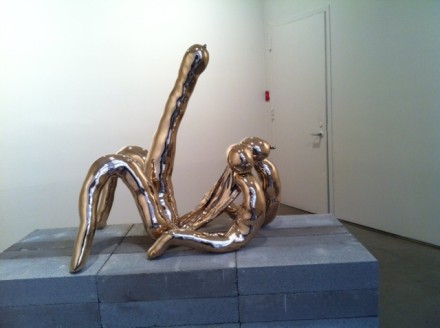 Eating a banana is the backdrop of the second penis sculpture, showing Sarah Lucas herself eating a banana in a few following shots. An obvious reference to the resemblance of a banana to a penis, Lucas in these shots seems to be toying with the whole subject of penis envy by ‘eating’ the banana in front of a huge cast penis, or creating her own fierce commentary.

A strong exhibition to mark her return to the United States, Sarah Lucas’s Nud Nob is on view at Gladstone through April 24th, 2014 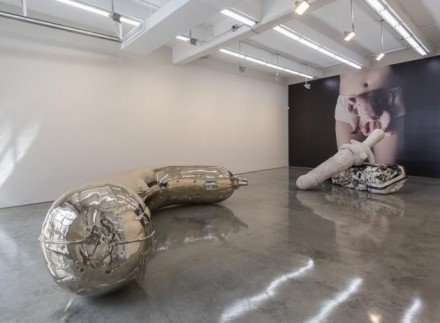 This entry was posted on Sunday, April 13th, 2014 at 12:00 am and is filed under AO On Site. You can follow any responses to this entry through the RSS 2.0 feed. You can leave a response, or trackback from your own site.