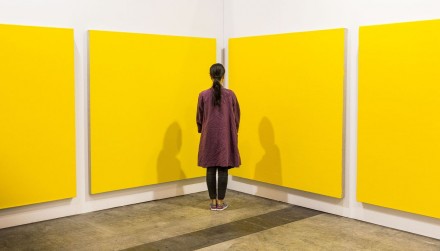 After a hectic week, the Art Basel Hong Kong event is winding down, leaving behind it a record of strong sales and high-profile attendees, continuing the fair’s prominent footprint in Hong Kong’s ever-strengthening draw for collectors and artists.  Pi Li and Doryun Chong of the M+ Museum could be seen browsing the works, as well as Uli Sigg, Takashi Murakami and Carsten Nicolai, who had just opened his astounding installation at the International Commerce Center. 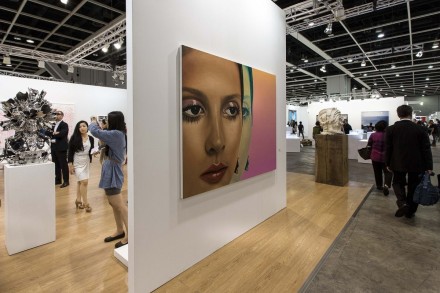 The first day of the event saw strong sales, despite early notes that Asian buyers were known to take their time before making a final purchase.  Victoria Miro sold a Grayson Perry tapestry in the first hours of the fair as well as a strong selection of works by Yayoi Kusama, and Hauser and Wirth capitalized on its selection of paintings by Zhang Enli, selling three between $180,000 and $240,000 in the first day, before selling another group of works by the artist as the fair moved into its second day.  A $135,000 Rashid Johnson and a $85,000 Sterling Ruby ceramic work rounded out the gallery’s early sales.  White Cube also had a strong outing, selling a large group of works that included a $375,000 painting by Christian Marclay.  Of particular note was the Upstream Gallery booth in the fair’s Discovery section, which rapidly sold out its booth of works by David Haines. 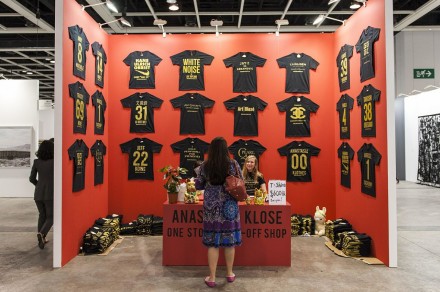 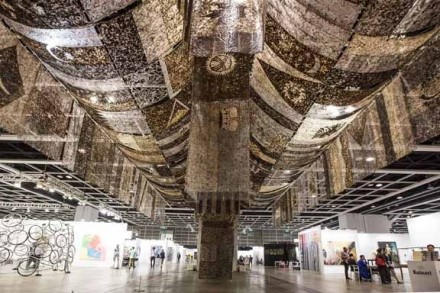 The Discoveries section of the fair also saw its annual $25,000 prize to artist Nadia Kaabi-Linke, whose work was being presented by Experimenter, Kolkata.  The work, exploring notions of confinement and trauma, won over the judges, earning the artist a win over the 54 other exhibitions in the fair. 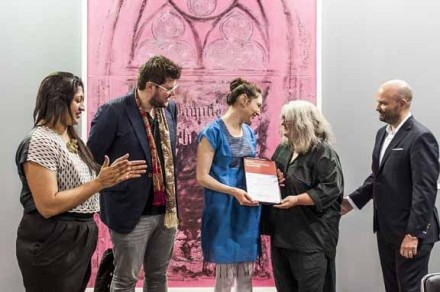 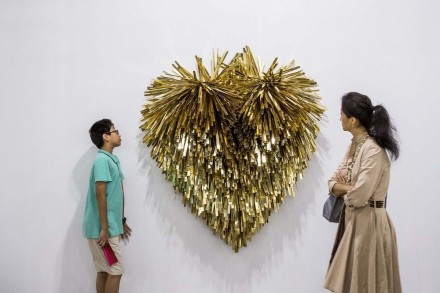 Subodh Gupta at Hauser and Wirth

Despite the popularity of blue-chip American artists, however, Asian artists won the day.  Paul Kasmin sold a handsome Nyoman Masriadi piece for $350,000, and Beijing’s Long March saw strong sales from its stable of artists, including works by Zhang Hui, Wang Jianwei and Guo Fengyi.  Pearl Lam also sold a strong work by Zhu Jinshi for an undisclosed sum, somewhere in the range of $195,000 – $240,000.  Fergus McCaffrey, the New York-based gallery focusing on Asian works, was also on hand, bringing a strong selection of Gutai artworks from its catalog.  Sean Kelley Gallery was also on hand, exhibiting a series of works by Laurent Grasso, Callum Innes, Idris Khan, and Mariko Mori (which sold for $178,000). 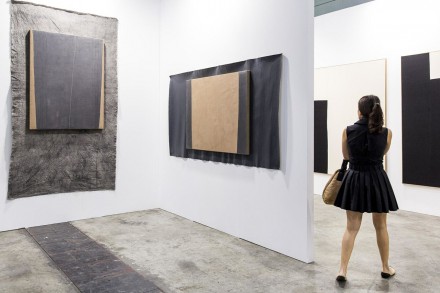 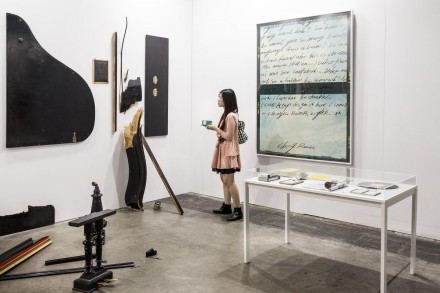 But beyond brand names and close connections to the marketplace, sales seemed harder to come by at Art Basel.  An older buying pool translated to an increased focus on blue-chip works and Asian mainstays, perhaps one of the reasons the fair’s often robust auxiliary events and programming seemed somewhat subdued this year by comparison.  Rather than attract buyers with extra events and increased curatorial might, the fair seems focused instead on quality and quantity, moving the artists that will sell easily, and working to establish ties to make the next time around even easier to make a sale. 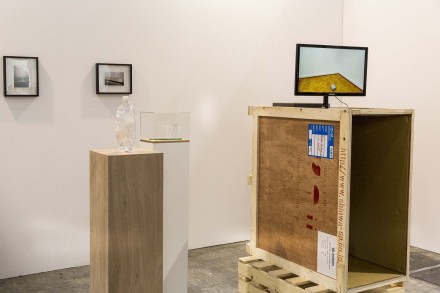 Yukihiro Taguchi at Mujin to Production

Even so, given the competition between the fair and the auctions underway in New York, Art Basel Hong Kong brought forth a strong offering that should only grow stronger as it moves away from the dense schedule of late May next year.

The fair closes on May 18th. 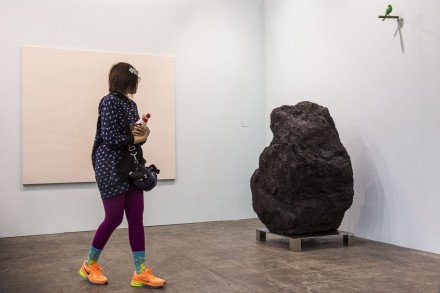 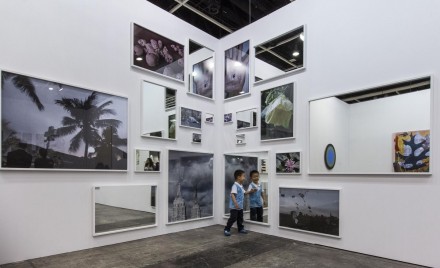 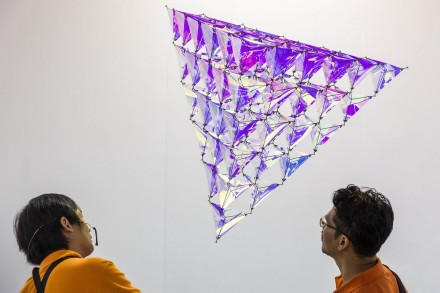 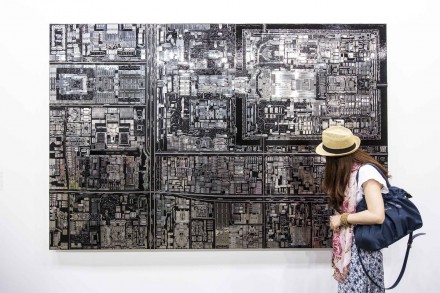 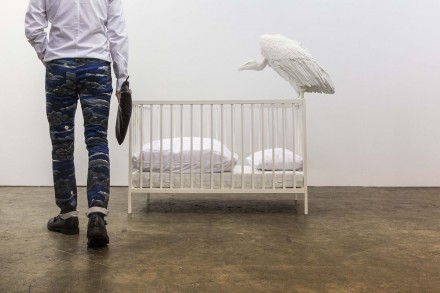 Elmgreen and Dragset at Perrotin 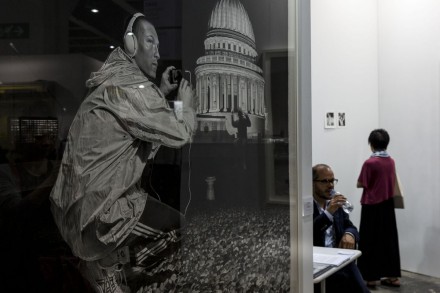 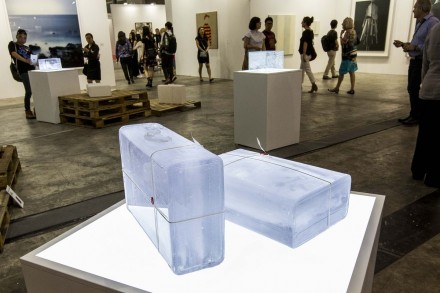 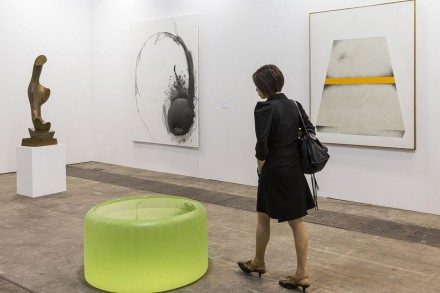 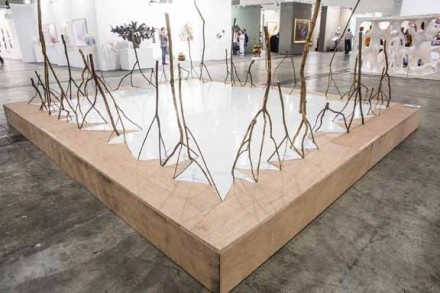 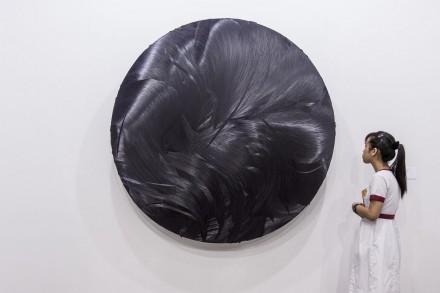 This entry was posted on Friday, May 16th, 2014 at 10:01 pm and is filed under Art News. You can follow any responses to this entry through the RSS 2.0 feed. You can leave a response, or trackback from your own site.