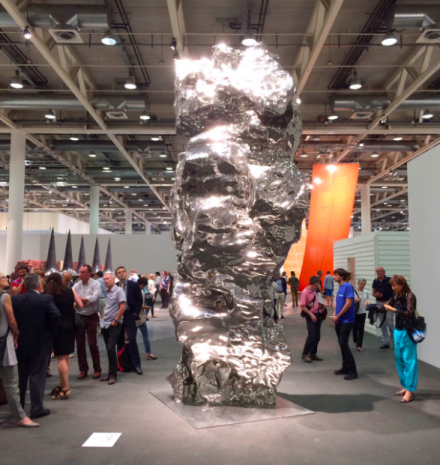 As Sunday winds down, the 2014 edition of Art Basel in Switzerland is drawing to a close, concluding another week that saw the small Swiss city at the center of the art world for one dizzying week of sales, projects and installations.  The wealth of collectors, dealers and curators saw dealers bringing big-ticket works to the table across the board, and the steady stream of sales for blue-chip works and high priced works continued well beyond the VIP days early last week. 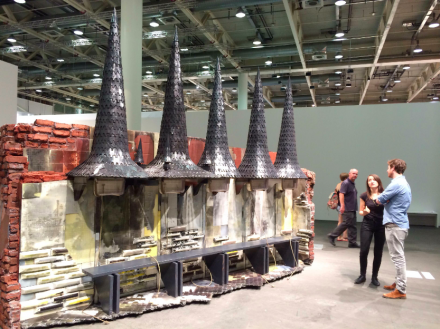 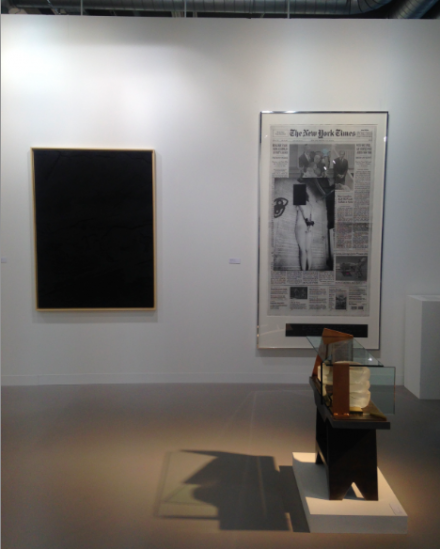 Of particular note during the week’s sales was the David Zwirner booth, which was drawing near-constant attention for a Jeff Koons sculpture of an inflatable dolphin, and which ultimately sold for $5 million.  The gallery followed this sale up quickly with an Ad Reinhardt work, which sold for an undisclosed sum rumored to top the Koons in price, as well as a Bruce Nauman sculpture that brought in $3.2 million.  In addition, the gallery sold a 1996 Gerhard Richter in the range of $2 million.  Skarstedt also continued its excellent week of fair sales after the early purchase of Warhol’s fright wig portrait for the sum of $32 million.  The gallery went on to sell a Georg Baselitz portrait for $3 million, as well as a 1987 Richard Prince for $2.2 million.  Other galleries also saw marked success during the week’s proceedings.  Sprüth Magers sold a $680,000 Andreas Gursky ink-jet print alongside a $245,000 Sterling Ruby in the early days of the fair, later adding in a $150,000 work by Cyprien Gaillard, while White Cube managed several multimillion dollar sales, including a $6 million Damien Hirst and a $5 million canvas by Julie Mehretu. 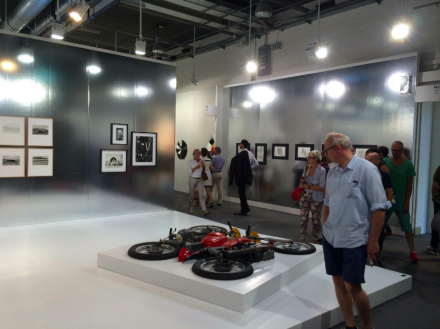 The prices paid seem to reflect the central role Basel is taking in the new fair economy, where the combination of social capital, huge customer pool and in-demand artists has created a rampantly competitive buying market that often runs the price up on works.  An article in Artnet this week notes the price range for these works as not so much in-line with premium works by the artist, but more aligned with major auction prices for artists, a sentiment reflected by David Zwirner himself.   “Sotheby’s and Christie’s went through a record cycle, and that gives people confidence,” the dealer told the New York Times. “Basel is our biggest weapon, if we want to go mano a mano with the auction houses.”  With a perspective like this, one has to wonder about the future of the art fair as an opportunity for major mark-ups, a closed system where demand always trumps supply. 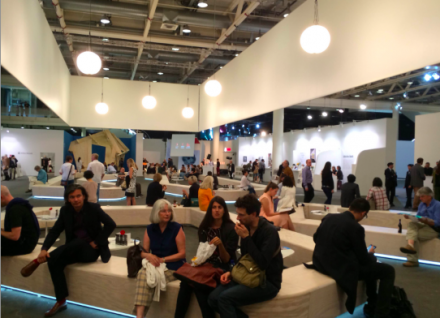 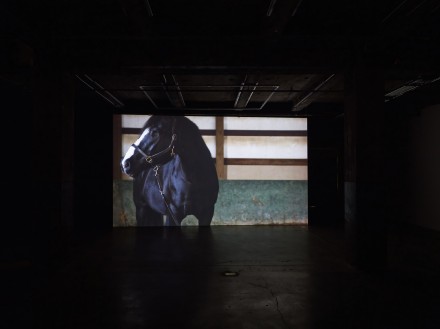 Wade Guyton, on the other hand, seemed intent to keep his prices under control, distributing five identical works created from the same files to each of the galleries he works with around the globe, and each selling for $350,000 (which they did, in the first hours of the fair no less).  The works were all hung identically, in an attempt to control the viewing experience from booth to booth as well.  In another corner, Berlin/Paris gallery Max Hetzler continued strong sales throughout the week, with sales by Albert Oehlen ($1 million), and Bridget Riley ($1.1 million).  Beijing’s Long March Space kept up a slower but steadily consistent pace over the week, selling a number of works by Liu Wei each day of the fair, all priced from $150,000 to $170,000. 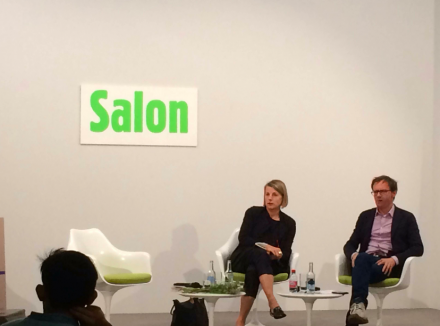 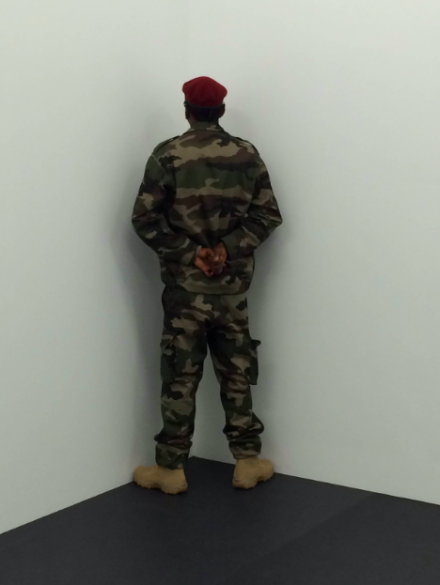 Santiago Serra, Veterans of the Wars of Eritrea, Kosovo and Togo Facing the Corner (2014) for 14 Rooms 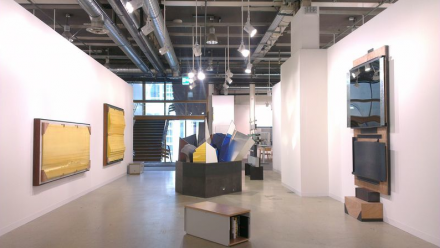 Also commanding major attention was Hans Ulrich Obrist and Klaus Biesenbach’s 14 Rooms project, focused not only on performance art, but on the intersections of sculptural, installation and sound art that stems from many artists’ work engaging with intersections of the body and environment.  In addition to performative works like Damien Hirst’s series of identical twins performing coordinated, corresponding actions, one could see Xu Zhen’s comical sculpture of a human model suspended in an impossible, nearly horizontal pose, and in the final room, Jordan Wolfson’s wildly received animatronic sculpture waited for visitors, swaying its hips in the same jarring movements that captivated attendees at his David Zwirner solo show earlier this year. 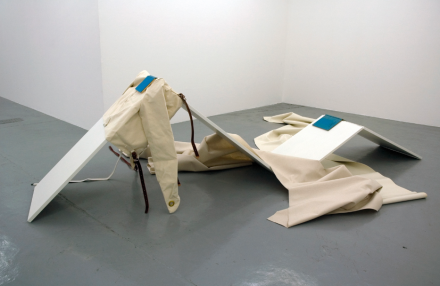 In another corner of the fair, Thomas Schütte was signing his newest art book, presented inside a pavilion of the artist’s own design.  With sloping roofs and a bizarrely jagged construction, the work stood out from the standard white cubes around it. 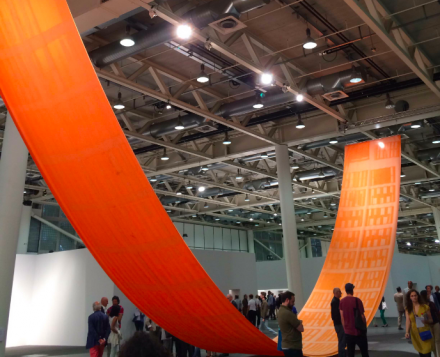 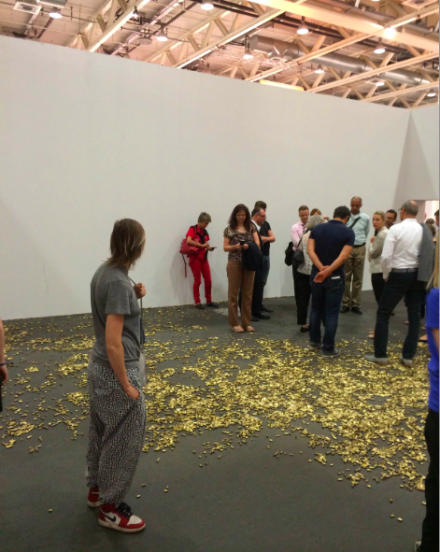 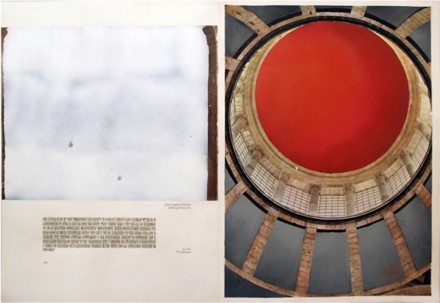 The Art Unlimited booth also commanded impressive attention, as curator Gianni Jetzer poured new life into the freshly renovated space of Hall 1.  In one corner, Haegue Yang of South Korea’s Kukje Gallery had hung an enormous, delicate series of fabrics, creating swirling, angular patterns that left viewers walking by with their heads crocked upwards.  Nearby, Giuseppe Penone’s immense row of bronze tree sculptures was equally eye-catching.  The space was unified by a 100 meter long floor work by Carl Andre, consisting of steel plates running through the space, and inviting visitors to walk on top of it to experience the exhibition from atop Andre’s material. 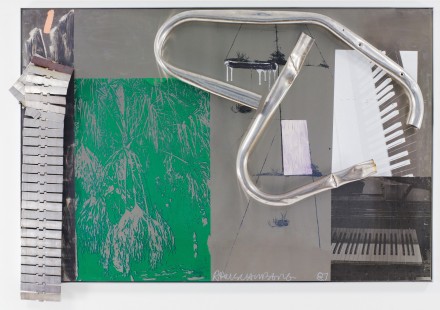 As the smoke clears from the week of high traffic and even higher prices, collectors and artists will decamp to London, where the final set of auctions for the spring art season are set to begin this week, concluding in early July with the Contemporary Evening Sales. 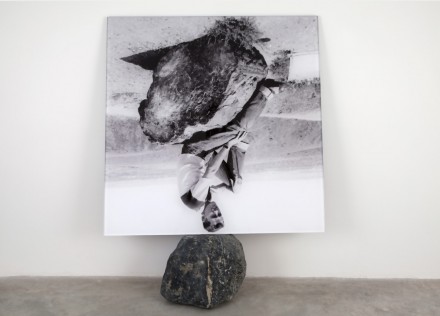 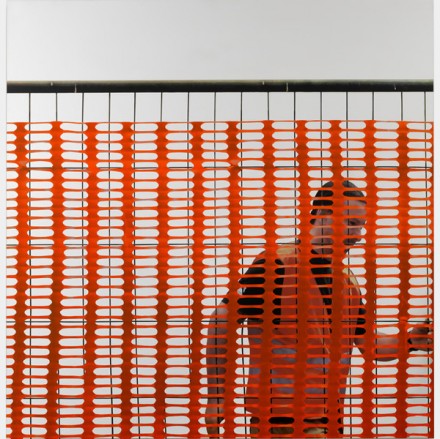 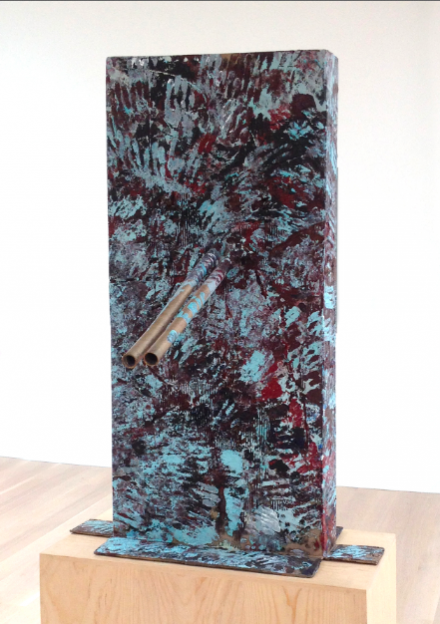 Mark Grotjahn at Blum and Poe 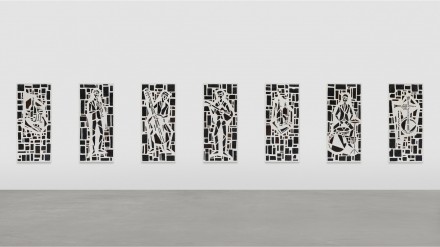 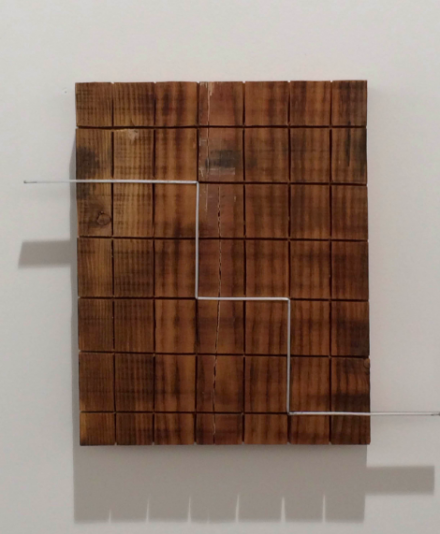 Kishio Suga, Compenents of Boundary (1997), via Blum and Poe 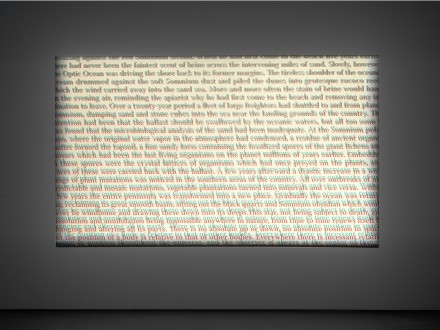 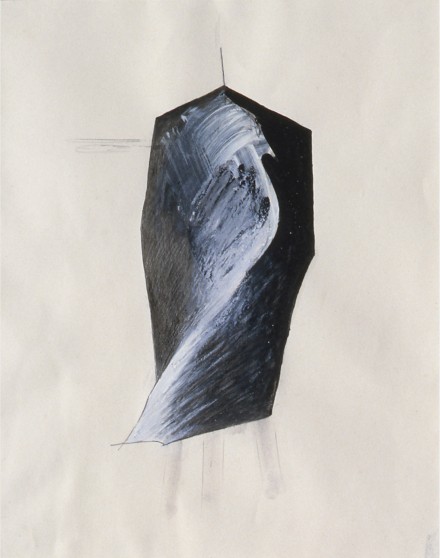 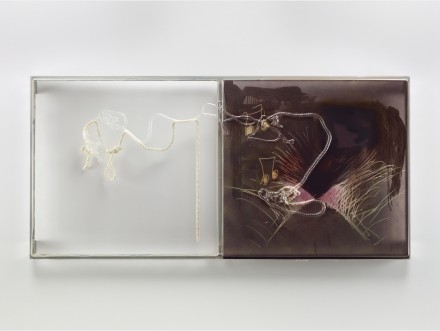 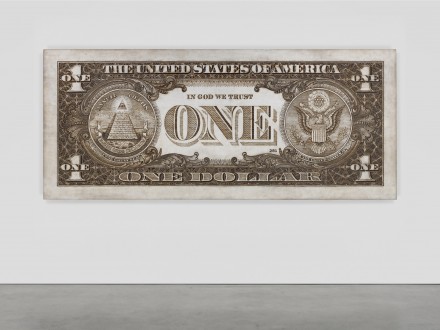 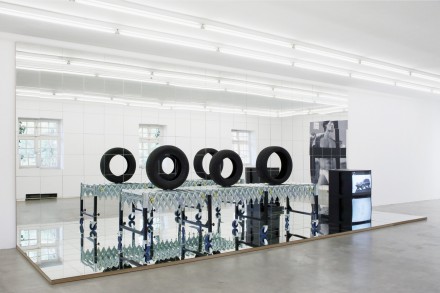 Josephine Meckseper, “Sabotage on Auto Assembly Line to Slow it Down” (2009) via Andrea Rosen Gallery 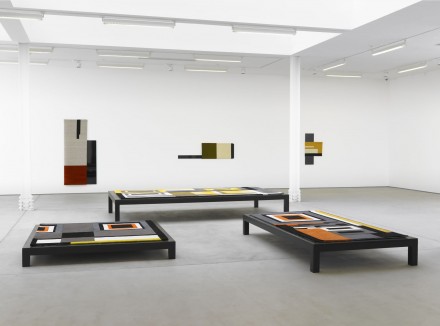 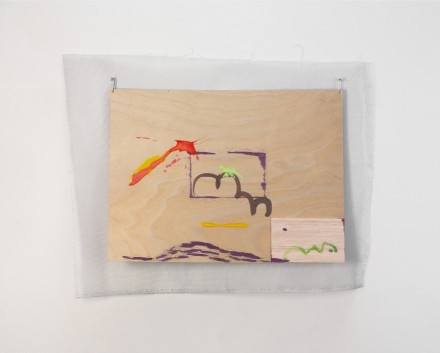 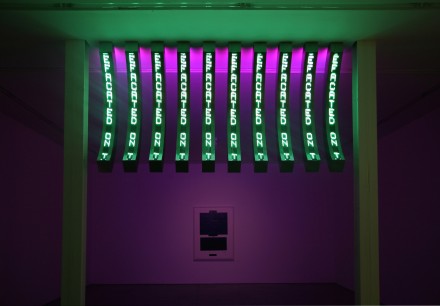 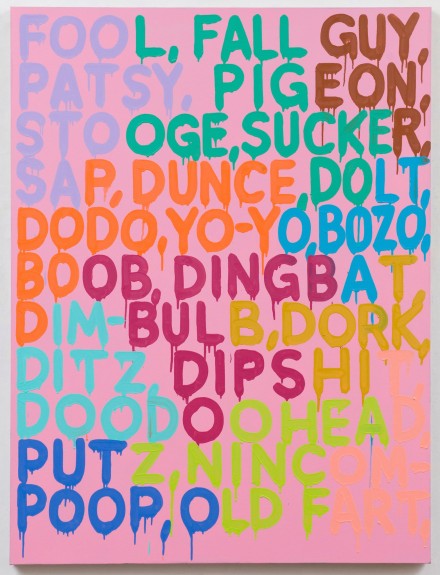 This entry was posted on Sunday, June 22nd, 2014 at 10:00 pm and is filed under Art News. You can follow any responses to this entry through the RSS 2.0 feed. You can leave a response, or trackback from your own site.