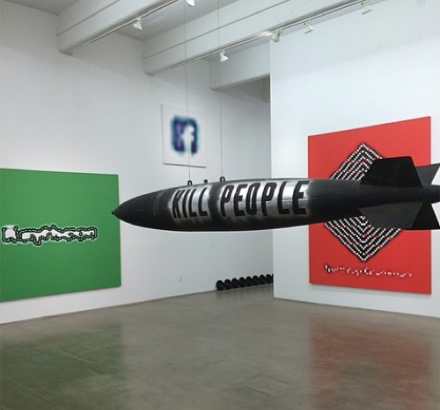 Few artists are prepared to plumb the depths and egoistic state of the art market, image culture and corporate personhood the way Mark Flood has for the past decades.  Time and again, the artist’s occasionally crass, bold-faced techniques and assemblages of mass-media signifiers toys with the spectacle of consumption, mocking both advertisements and political symbolism as bound up in a state of image-consumption.  It’s this dichotomy, writ large against the backdrop of the art market that defines his current show of work at Zach Feuer in New York. 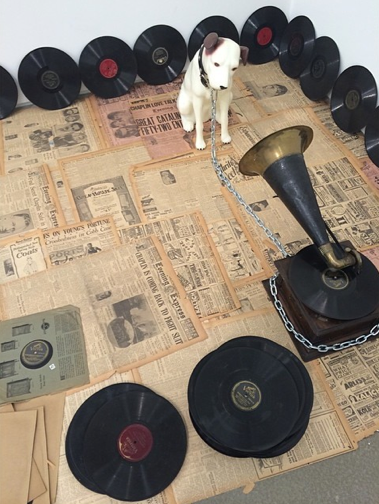 For Flood’s newest exhibition, he has filled the full expanse of the gallery with a variety of objects and signage.  Large canvases emblazoned with classic American corporate logos play against Flood’s manipulated advertisements and celebrity photos, tweaking them with violent verbiage that taunts the piece and its subjects in equal measure, often spray-painted with stencils that add a certain haste to the proceedings.  At the front of the space, Flood has covered the walls with auction notes and results from his recent record-setting sales, as well as reviews of the current show (one imagines that this review will find its way there soon).  With this zest for his own public image, Flood seems happy to poke holes in his own mystique, always reminding the viewer of his work’s hefty price tags.

It’s a series of thematics that’s popped up frequently in the past months, from Wade Guyton’s act of reprinting past works after they sold for record prices in an attempt to stunt market speculation, to Richard Prince’s recent diatribe on his website against the “buy low, sell high” Wall Street mentality currently sweeping the auction rooms.  But with Flood’s work, the pieces don’t seem wholly antagonistic towards the forces of the market.  Rather, Flood’s lightning-fast production and slapdash methods seem to be feeding into a ravenous art buying populace, bringing attention to the issue at hand by feeding a steady stream of punky, spray-paint emblazoned works into circulation that pale in comparison to the record-setting works Flood underlines in the entrance to the show. 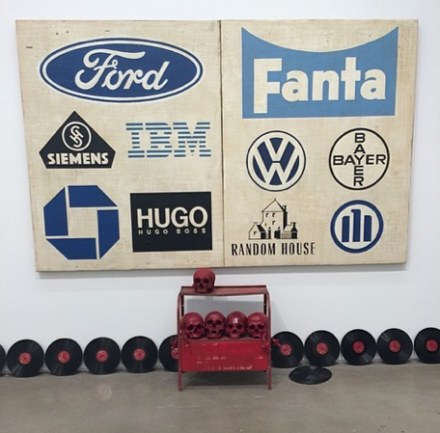 But it’s Flood’s masterstroke next door, The Insider Art Fair, running from May 14th to the 17th at 548Center, which tips the scales from one-dimensional critique to trenchant parody.  Mimicking the superlative-laden texts of art fairs and the recurring creative tropes frequently seen at various fairs (down to a mock press release that’s almost frightening in its spot-on send up of the art “journalism” listicle), Flood takes a stab at the blend of dubious scholarship and salesmanship that defines the contemporary art fair, and in turn underscores its new place in the exchange between the museum, gallery and customer.

Between the two shows, Flood seems more than willing to articulate the intersections of scholarship, sensation and price fluctuation that defines the contemporary art landscape, and does so here with deft, incisive movements.  But at the same time, his work seems stuck between overt criticism of the art/economics machinery and a meticulously reproduced microcosm that merely repeats the modes of labor and production that marks the gallery system at large.  Flood’s work at times feels lost, stuck between the market that sustains his practice and the gag reflex he seems to make at any thought of his work as an object of consumption.  Ultimately, it’s this very same confusion that makes his work so impressive, and so accurate.

Available Nasdaq Symbol  is on view through June 14th. 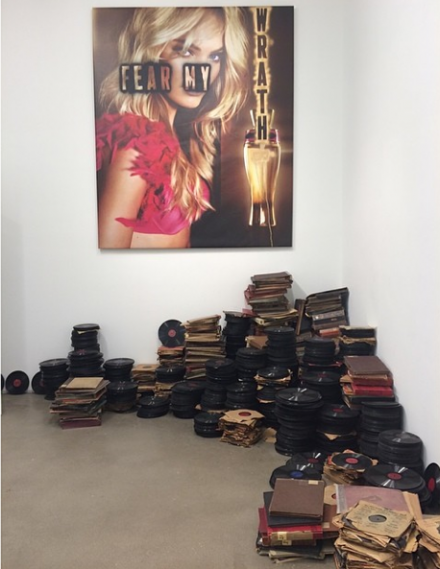 This entry was posted on Saturday, May 31st, 2014 at 10:36 am and is filed under Art News. You can follow any responses to this entry through the RSS 2.0 feed. You can leave a response, or trackback from your own site.