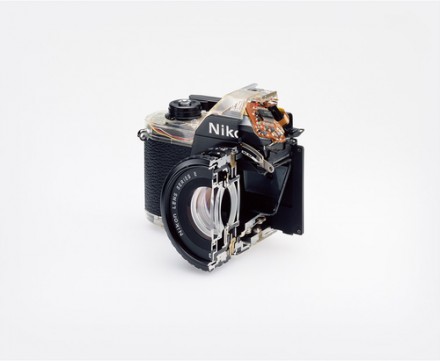 Now at the Museum of Modern Art through November 2nd, 2014, Christopher Williams: The Production Line of Happiness serves as a comprehensive overview of the 35-year-long career of the influential artist.  Part of the first wave of West Coast Conceptual artists, Christopher Williams graduated from the California Institute of the Arts and went on to become a preeminent conceptual artist and art professor at the Kunstakademie Düsseldorf.  His artistic legacy has fervently pursued notions of commercialism, production, capitalism, and process, and the execution of this retrospective very clearly outlines those themes. 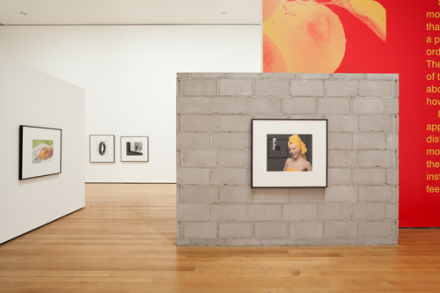 Installation view of Christopher Williams: The Production Line of Happiness via The Museum of Modern Art, 2014.

Throughout, Williams flows smoothly through ideas of the object and its nature, subverting curatorial signifiers while creating a museum experience that is simultaneously invigorating and jarring.  The images on the walls are hung noticeably lower than is customary, and images often repeat themselves, as though the directions for hanging the show had somehow been scrambled.  One wall is constructed of cinderblocks, and boasts only one image, while another is boldly interrupted by a line of blue paint, while a photograph hangs directly over the streak.  There is also a series of appropriated imagery of John F. Kennedy that seemingly exists in world all its own. 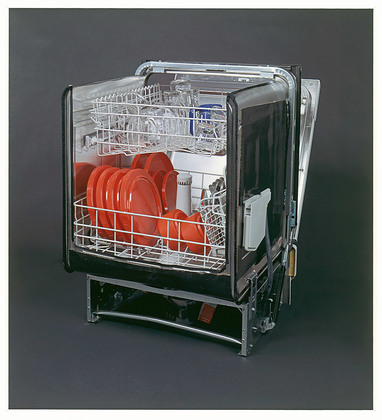 By frequently inviting the unexpected, Williams jolts the viewer from a passive experience of viewing art. Instead, he asks one to question, to consider – to feel the physical necessity of bending down to examine an image or a framed object, such as the customs letter that juts awkwardly from the wall, facing inward, and seemingly repelling viewers as opposed to inviting them in. This is the very essence of The Production Line of Happiness: to question and consider, from beginning to end, the systems that have become integral pieces of modern life. Images of dark rooms and its related tools call to mind the process of creating the photograph itself. A bright, commercial image of a woman wrapped in yellow towels is interrupted by the stark presence of a chromatic card in the corner of the frame. This subtle act disparages the wiring of perfection that one expects from commercial photography. 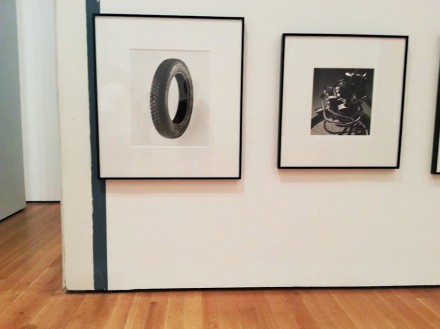 Installation view of Christopher Williams: The Production Line of Happiness, via Emily Heinz, 2014.

Sculptural elements are also crucial to the execution of the retrospective: palettes and boards used to move photographs for other shows make their appearance as art objects, situated in the middle of the gallery floor. Very little obvious explanation is given, save for the press release for the show. Even the bright red programs, which lay stacked beside the entrance to the show, do not offer anything more than factual statements about the materials comprising the objects and the images.  This sense of mystery is important to provoking the audience, asking them to draw their own conclusions and ask their own questions.  By explaining less, Williams robs the audience of the chance to passively consume the work.

Williams has been a very important figure in conceptual art and photography for the past few decades, and this retrospective is a tremendous summation of his career, alongside the ideas central in much of his work from past years. Christopher Williams: The Production Line of Happiness is simultaneously an optimistic, pragmatic approach to things and their objectivity, often directly intertwined with our relationship to them. In a world now inundated with the digital, abstract, and intangible, but still so intoxicated by producing and consuming, The Production Line of Happiness is a much needed dose of sobriety.

Christopher Williams: The Production Line of Happiness is on view at the Museum of Modern Art from now until November 2nd, 2014. 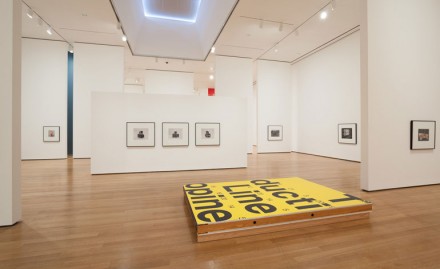 Installation view of Christopher Williams: The Production Line of Happiness, via The Museum of Modern Art, 2014.

This entry was posted on Monday, September 22nd, 2014 at 12:00 am and is filed under Art News. You can follow any responses to this entry through the RSS 2.0 feed. You can leave a response, or trackback from your own site.