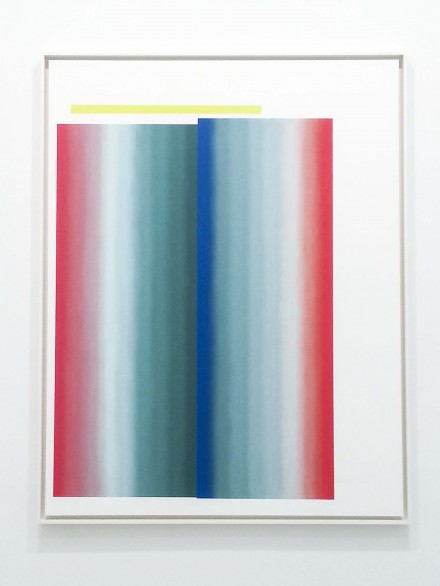 Jenny Holzer, Presently in the United States (2014) via Emily Heinz for Art Observed

On view now at Cheim & Read through October 25th, 2014, Dust Paintings is a series of recent paintings by Jenny Holzer, an artist known primarily for her use of language and political investigation. Culled from the ongoing use of political documents from 2004, months after the United States and United Kingdom instigated the invasion of Iraq, Holzer makes a comprehensive “map”, of sorts, from linguistics to action; from intention to execution, stressing importance and the power of language, while providing a kind of physical and aesthetic proof of this idea.

Upon entering Cheim & Read, one is immediately aware of a grinding mechanical noise, filling the full space of the gallery, playing off against a strange glowing light emitted from her electronic lighting piece Hanging, a series of electronically generated words moving slowly from side to side by a robotic arm attached to the ceiling of the space.  The understated, mechanical violence evoked in this piece and its title is no mistake, and sets the tone for the rest of the show quite effectively, and its dull glow light is a striking complement to the work Conclusion (2014), a void into which the viewer’s eye quickly falls.

Jamal Naseer, an Afghan prisoner who died while under the watch of U.S. Special Forces, becomes a prime focus of Dust Paintings. The U.S. Army Criminal Investigation Command’s Gardez Report was used as source material for a large portion of the paintings in this series, and the literal words and language used in that report are physically present in the works, written into the paint itself. These paintings, which coexist with horrifying descriptions of how poorly these prisoners were treated and how badly they were abused, are presented as large, grayscale paintings, some of which appear to be falling apart or which present large, dark moments of absence as a focal centerpiece. The experience of reading and comprehending language, and immediately sensing that language reflected emotionally, takes the physical space of the work as a mode of information conveyance.  Their unavoidable size and hand-written texts possess a pressurized optical quality, and saturate their surfaces with cultural signifiers.  Holzer’s painting and re-painting of words is an evocation of traditional Arabic calligraphy-ghubar, which translates literally as “dust writing.” 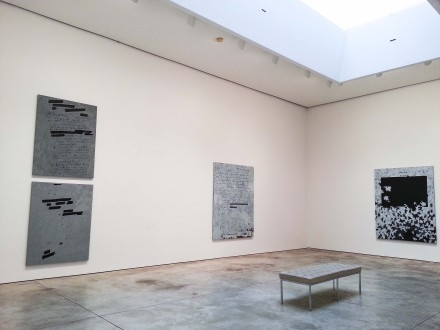 In contrast with the other works on view, the data that is absent here is all the more ominous, and as such, these beautiful, Modernist paintings carry with them the weight of political oppression. They become at once meditational and attractive and horribly repulsive as the dregs of their context and control over the presentation of information is known. This tension between the beauty of the object and the dark nature of their meaning provides them with a strong sense of intrigue, while underscoring the nature of language as a communicative advantage, and the ability of powerful military forces to withhold information at will. 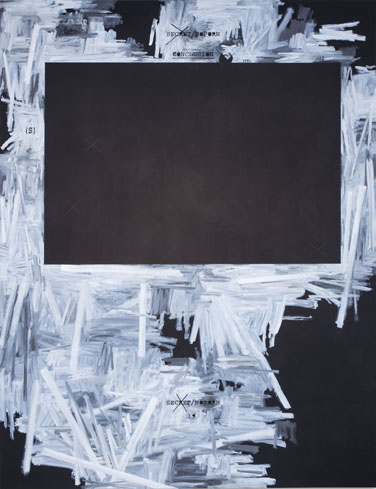 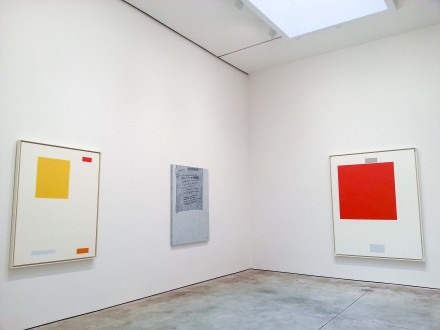 Ultimately, Dust Paintings is powerful by evoking a subtle, often unseen horror. It sets beauty against the hard truths of modern military action, actualized and made tangible through appropriated language, while encouraging the viewer’s distrust in even the most beautiful of the paintings. The series invites the viewer to look closer, to examine, and to find the seams in these seemingly perfect objects, or seemingly perfect systems, which may reveal something considerably more sinister upon closer inspection

Dust Paintings is on view now at Cheim & Read from now until October 25th, 2014.

This entry was posted on Saturday, October 25th, 2014 at 3:42 pm and is filed under Art News. You can follow any responses to this entry through the RSS 2.0 feed. You can leave a response, or trackback from your own site.