Dia Foundation Use of Dan Flavin Work Leads to Debate 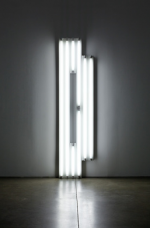 A new project in Puerto Rico, executed by Allora and Calzadilla in conjunction with the Dia Foundation, is stirring debate for its use of a Dan Flavin sculpture in a manner some feel is inappropriate for the artist’s work.  Puerto Rican Light (Cueva Vientos) places a 1965 Flavin light sculpture in a remote limestone cave on the Southwest coast of the island, which has already drawn some criticism.  “My role at Dia is to bring validity to both the present and the past,” says curator Yasmil Raymond. “There are people who will undoubtedly see this as a provocation from the perspective of post-colonialism. But I think others will see it as a homage to Flavin and to his evocation of this island.”

This entry was posted on Tuesday, November 4th, 2014 at 12:38 pm and is filed under Art News. You can follow any responses to this entry through the RSS 2.0 feed. You can leave a response, or trackback from your own site.