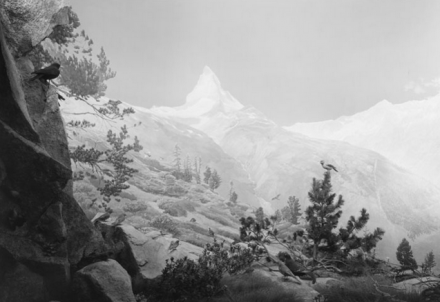 Hiroshi Sugimoto, Birds of the Alps (2012), via Pace London

Hiroshi Sugimoto returns to Pace London this month, presenting a new body of work from his long-running Dioramas series, and exploring notions of the fossil as both an artifact and a contemporary object through his cunningly arranged photographs.

The original emphasis of Sugimoto’s Dioramas series is the presentation of nature, not merely as a cautious re-creation of authentic animal behavior and action, but even more importantly, of the human impulse to re-create and re-position these behaviors as a mode of historical understanding.  Photographing images and scenes from the National History Museum in New York City, as well as other major natural history institutions around the world, Sugimoto investigates the human impulse to arrange and position non-living bodies in a mode that conveys what their living analogs may in fact behave. 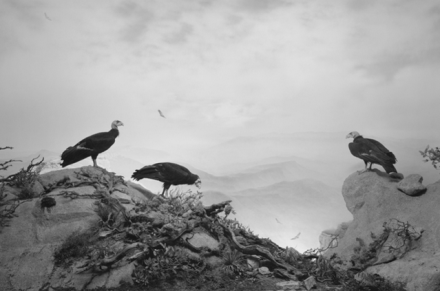 This break between the real and the photographed frequently makes itself felt within Sugimoto’s works, as certain objects, images or poses suddenly break the viewer away from what would originally be considered an organically composed nature photograph.  Painted backdrops and artificial plants make themselves felt at unexpected moments, contrasting sharply with the rigidly lifelike poses of the animals included in each frame. 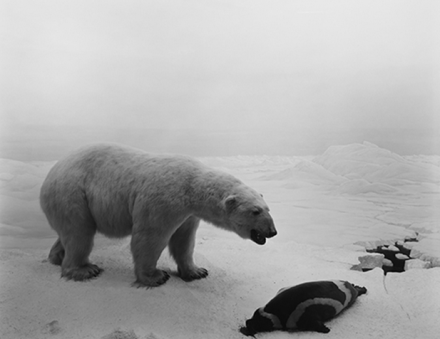 But as much as Sugimoto’s photographs document a fracture between reality and its simulacrum, his work equally manages to capture a certain truth of the contemporary era, an impulse towards documentation that ultimately fits quite snugly as the main focus of these works.  With each realization of the distance between the image and the natural environment its subject points to, Sugimoto clarifies a certain human longing for authenticity, or rather, a somewhat tragic nostalgia for the natural world that is inescapably tied into these dioramas, approximations of a nature that may never exist again. 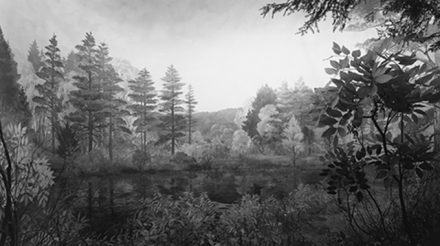 Ultimately, these works on view combine each of these elements in turn, allowing the photograph to move between interpretive modes.  One particular image, Polar Bear (1976) shows a polar bear and seal, ostensibly just killed, on a frozen arctic landscape.  Underscoring the lifeless frame of the image, the seal creates a moment of cognitive dissonance, forcing the viewer to contend with what aspects of the image are in fact, lifeless, what aspects are re-created, and even, why the museum staff might choose to present the image as such.  In that moment of indeterminacy, Sugimoto allows the compiled parts of the image to avoid any singular interpretation. 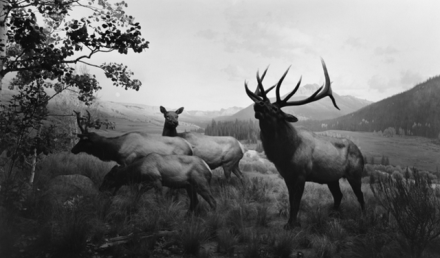 Reviewing the artist’s ongoing series, Still Life allows a broad overview of his Dioramas works, exploring not only how his eye towards the series has evolved, but also how his particular focus on composition allows a series of variations on the natural world, and the human hands that seek to reproduce it in a controlled environment.

Sugimoto’s exhibition is on view through January 24th. 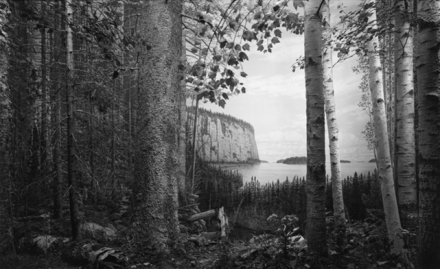 This entry was posted on Saturday, January 3rd, 2015 at 12:00 am and is filed under Art News. You can follow any responses to this entry through the RSS 2.0 feed. You can leave a response, or trackback from your own site.