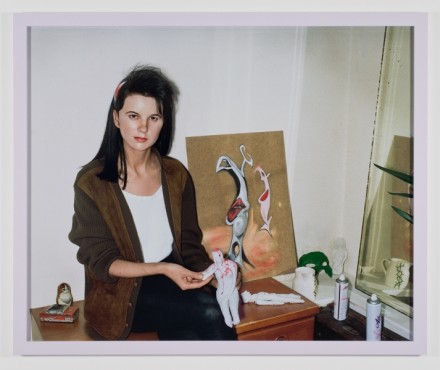 Gillian Wearing, Me As an Artist in 1984 (2014), all Photos Courtesy of Regen Projects Los Angeles.

One of the most prominent members of the Young British Artists, Gillian Wearing, who in the past few decades has established a unique and enduring voice in the contemporary discourse, is presenting her new body of work at Los Angeles’ Regen Projects. The artist’s fourth collaboration with the gallery, everyone, features two new video pieces as well as various multimedia works that juxtapose Wearing’s investigations on personal memory, confrontation with past and unfolding of angst as a direct result. 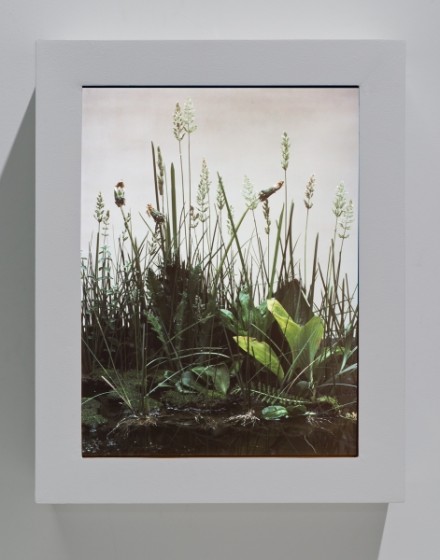 Of two videos on view, We Are Here carries semi-autobiographical traces of Wearing’s past, as it is set in the artist’s childhood home in the West Midlands; however, the work prominently features a fictional town, based on an Edgar Lee Master’s novel, which infuses a dream-like, almost unearthly state into the video. Deceased residents of this small town share their posthumous feelings on their lives, each possessing the ability to return to life after death. A common element of Wearing’s practice in general, the concept of strangers sharing intimate details about their lives, meets with the eeriness and phantasmagorical abstractions that the notion of the “afterlife” carries. 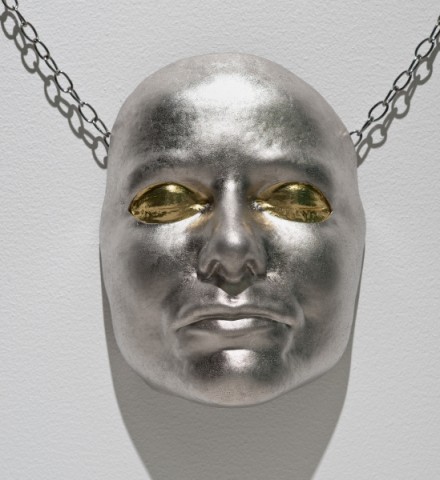 Wearing came into prominence in the early 90s with her infamous series of photographs in which random passersby in London posed for her camera, holding written expressions that they have recorded on a piece of paper. From “I am Desperate” to “Queer+Happy”, these notes portrayed the reality of an era in a most candid and honest way: confessions by total strangers, whose foreignness to the viewer allows only cursory assumptions about their lives.

The influence of this series is still visible in her practice, not only in We Are Here, but also in My Fortune Misfortune, a series of resin cast hands inscribed with readings by a group of fortune tellers about the artist’s future. Diverged from the autonomy of the former pieces, depicting individuals speaking about themselves, these fortunes comment on the contradiction between one able to predict the future, and the object of their vision, given the fact that fortunetellers were unaware of Wearing’s identity. 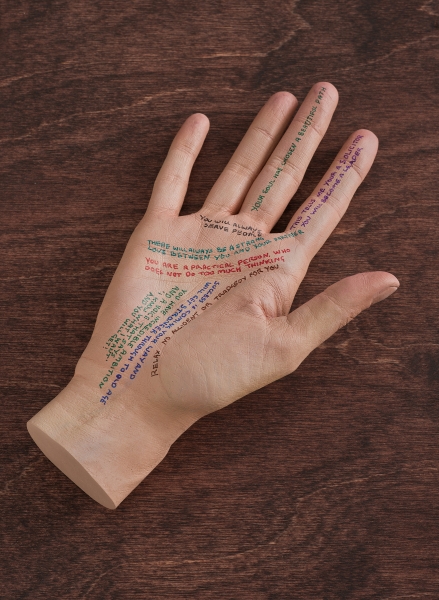 Wearing has merged the elements of performance, photography and video in such ways that the results frequently become difficult to interpret under one medium or thematic approach. 60 Minute Silence, for instance, Wearing’s one hour long video from 1996 is an ideal example of this stylistic disguise, showing a group of British police men and women posing in front of a video camera  as if posed for a photograph.  In her current show, the artist continues similar pursuits in pieces such as Crowd, a  video still of a bouquet of flowers, paying an homage to a watercolor painting by Dürer; or Me as an Artist in 1984 showing Wearing posing with a mask of her face from thirty years ago in a period appropriate attire, complicating the attributions on time, space or identity.

Gillian Wearing: everyone is on view at Regen Projects through January 24, 2015. 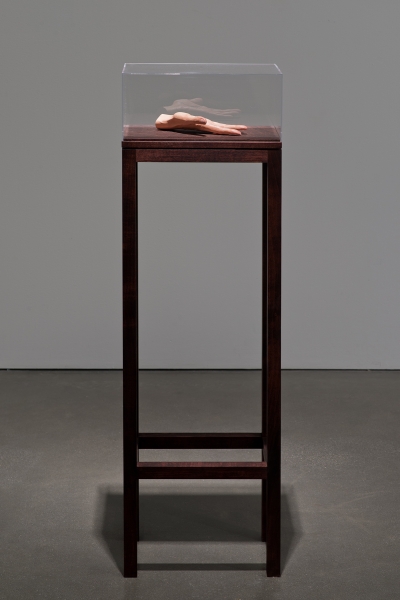 Gillian Wearing, My Fortune and Misfortune (2014)

Read more:
“Masks and masquerades that reveal the self” [LA Times]
Gillian Wearing – Everyone [Regen Projects]

This entry was posted on Saturday, January 24th, 2015 at 10:29 am and is filed under Art News, Featured Post, Show. You can follow any responses to this entry through the RSS 2.0 feed. Both comments and pings are currently closed.