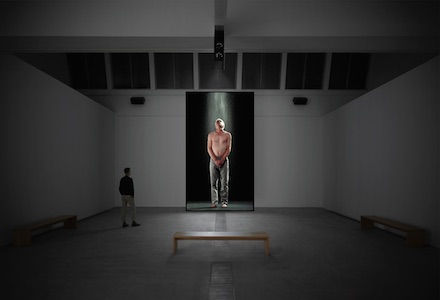 On view at Farschou Foundation Beijing is a solo show by American video artist Bill Viola. Known for his large-scale, high definition, ultra slow-motion moving images, the artist has served as an innovator in the technological execution and exhibition of video art. His show in Beijing, titled Transformation will continue through March 22nd. 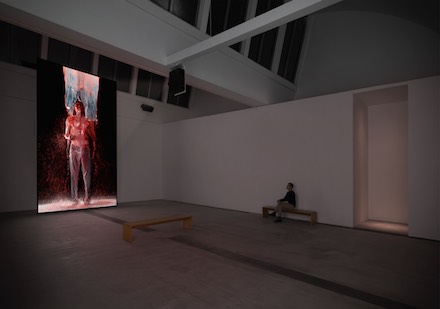 Among the works presented at Farschou is the world premier of Inverted Birth (2014), Viola’s most recent work. The projection is 5 meters hall, and the content depicts “five stages of awakening through a series of violent transformations.” It starts with a man covered in black fluid, and eventually the fluid begins to rise up, becoming a kind of extreme flood. The color of the fluid then changes from brown to red to white (representing various vital materials of earth, blood and milk), before finally becoming transparent, like clean water. As the fluid around the man changes, so does the mood of the film – from despair and fear into a sense of purification and clarity.  At the end, a soft mist represents the ultimate purity of the moment of death, running contrary to the more popular notion that the most pure moment is the moment of birth. 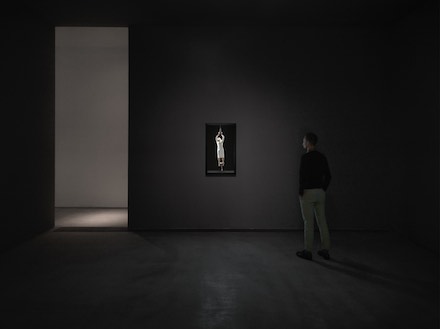 Additionally on view are four works from the artist’s Martyrs (Earth, Air, Fire, Water) series, which is also on permanent display at St. Paul’s Cathedral in London.  The works depict four martyrs tormented by the 4 essential elements – earth, air, fire, and water, their stillness and passive stance unchanged by the elements which violently assault them, representing “the darkest hour of the martyr’s passage through death into the light.” Viola explains that these works “exemplify the human capacity to bear pain, hardship, and even death in order to remain faithful to their values, beliefs, and principles.” The martyrs forego the comforts of the physical body, displaying “fortitude, endurance, and sacrifice.” 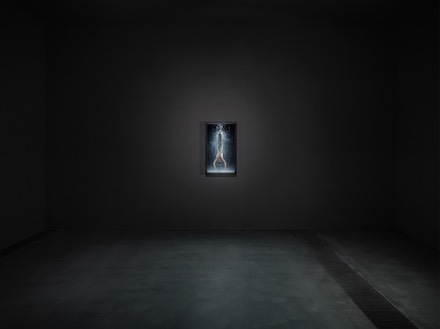 Finally, The Raft (2004), a video and sound installation depicting a varied group of people and their reactions to being struck by a massive onslaught of water, offers a strangely fitting conclusion to the exhibition.  The people cling to each other for survival, all the while slowly succumbing to the water’s brute force. When the water stops, the individuals are revealed as they regain their senses, some weeping or cowering and others helping the fallen ones up again. As always, the work occurs in slow motion, so that we can see the subtleties in the faces and body language of a group of strangers in the facing disaster together.  Compared with the artist’s more recent work, the piece offers a sense of return from the transcendent symbolism of Viola’s recent religious iconography, tying his visual repertoire and his distinct focus on the human together through a series of interconnected elements.

Transformation at Farschou Foundation Beijing will continue through March 22nd. 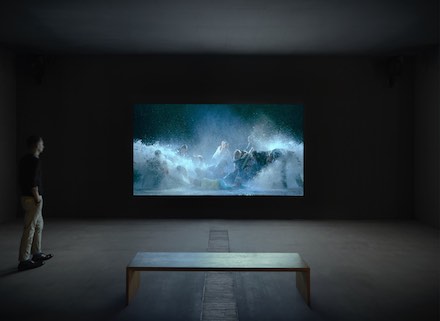 This entry was posted on Sunday, March 15th, 2015 at 12:00 am and is filed under Art News, Featured Post, Show. You can follow any responses to this entry through the RSS 2.0 feed. You can leave a response, or trackback from your own site.