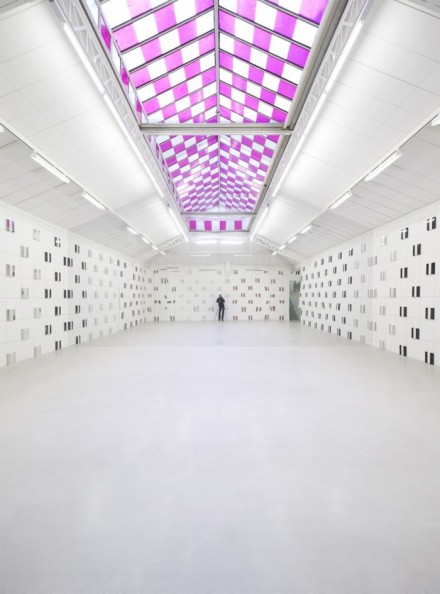 Daniel Buren presents a new, in situ exhibition at Kamel Mennour this month, a show that demonstrates the form a gallery space lends to the art shown within it. Transforming the space itself into a part of his artwork, Buren instills in his work the tendency to guide the viewer’s perception and sense of location. 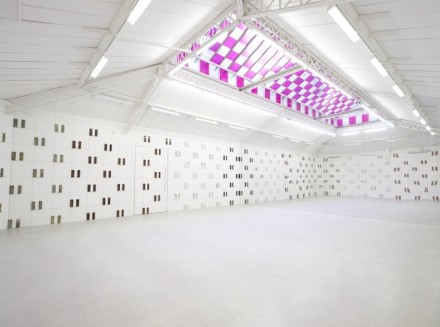 At first glance, images of the exhibition show a long room symmetrically tiled with stone slabs and lit by a patterned skylight. A closer investigation reveals that a mirror is slicing the image in half and warping the image of the tiles on the apparent back wall. Images of the empty gallery reveal the room in the photograph is deceptively small, and the use of the mirror not only creates the illusion of space but also allows the audience to witness themselves as a part of the space. 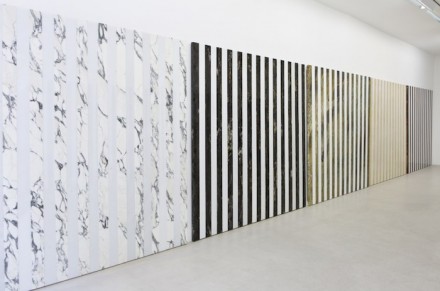 Buren continues to explore the effect of his commonly used alternating white and tinted stripes, with the colors and materials of this show defined by the texture of marble, granite, and graphite, a move away from merely colored stripes of paint, and towards a more active agency for his familiar forms. Amid the stone slabs in one room of the exhibition, a pinkish light shines through the adhesive filters applied to the skylight in an alternating pattern. His commonly used tool of the alternating stripes, blended into the structure of the space, provides viewers a new lens through which to view the environment around them, but also allows these stripes to act in their own right. 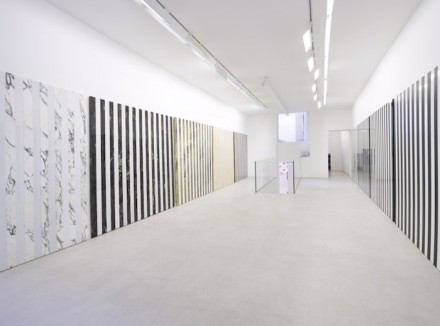 Buren refutes the idea of art as autonomous, stating in a 2012 interview with Artinfo, “As soon as you look a bit closer, you notice that [art is] not autonomous in relation to society, or in relation to the wall, etc.”  This stance is evident in the way the stripes on the wall of the gallery are defined by the whiteness of the wall—the wall is not simply a place for his work to be hung but instead a part of the piece. The skylight where the pink filters are placed defines their shape; the sunlight filtering through allows them to play an active role in the exhibition.  Even upon leaving the gallery, the bands of color the exhibition centers around are still within the viewer’s line of sight as a scene of the gallery appears in the reflective bands adhered to the glass door. Three layers of perception overlap in that moment: the exhibition behind, the reflective bands that create a barrier between the gallery and what lies outside, and the outdoor space. 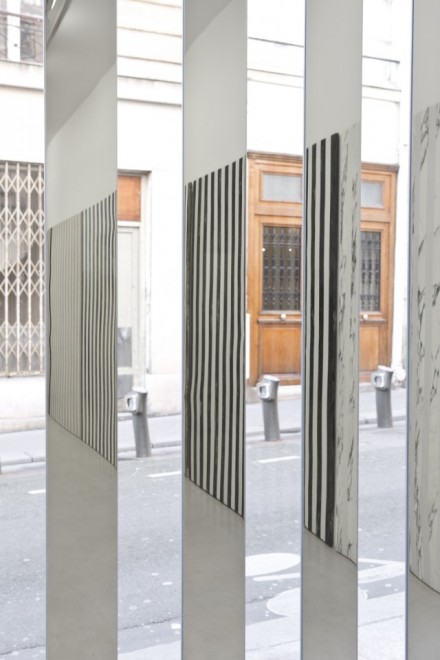 This communication between work and environment is crucial in Buren’s art. As is noted in Kamel Mennour’s press release, the basis of his work lies in the phrase “in situ”: “To my mind, it means that there is a purposefully accepted connection between the venue and the ‘work’ that is made, occurs, and is exhibited there. This is true of all my work without exception, here and elsewhere, since 1965.”

This entry was posted on Wednesday, March 11th, 2015 at 12:00 am and is filed under Art News, Featured Post, Show. You can follow any responses to this entry through the RSS 2.0 feed. You can leave a response, or trackback from your own site.