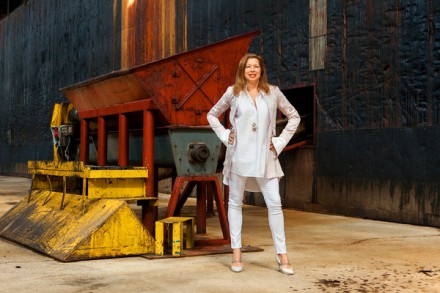 Following 20 years serving as President and Artistic Director of New York City’s prolific non-profit arts org Creative Time, Anne Pasternak will take over as President of the Brooklyn Museum, taking the helm from the recently departed Arnold Lehman, who had worked almost as long in the position.

“I am humbled and deeply honored to follow in the footsteps of Arnold Lehman, a trailblazing director who has led the Brooklyn Museum to prominence with ambitious programming, an ethos of inclusion, and a great love of the Museum’s permanent collections,” Pasternak said in a statement.

Pasternak has worked across the city and globe with Creative Time, hosting a number of widely attended events and exhibitions, including last summer’s massive Kara Walker project at the Domino Sugar Factory, as well as placing the organization at the forefront of scholarly and political discussion through the organization’s Creative Time Reports branch.  “Anne Pasternak is a fantastic leader who will expand upon the extraordinary growth the Brooklyn Museum has achieved during Arnold Lehman’s tenure,”states Elizabeth A. Sackler, Board Chair and Founder of the Elizabeth A. Sackler Center for Feminist Art at the Brooklyn Museum.  “Pairing Anne’s talents with the depth and breadth of the Brooklyn Museum’s permanent collection—one of the richest and most expansive collections in the country—will bring the Museum to new heights.”

This entry was posted on Wednesday, May 20th, 2015 at 11:23 am and is filed under Art News. You can follow any responses to this entry through the RSS 2.0 feed. You can leave a response, or trackback from your own site.