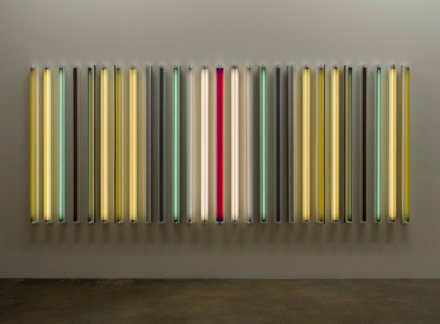 Currently on view at Pace Gallery’s W. 25th Street location is a set of new, “site-conditioned” works by Light and Space pioneer Robert Irwin, continuing the artist’s ongoing experimentation with the perceptual capacities of fluorescent lighting, and the complementary reactions of color, shadow and spacing. 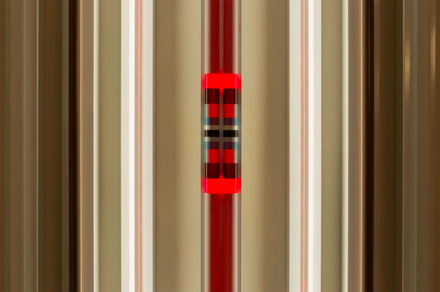 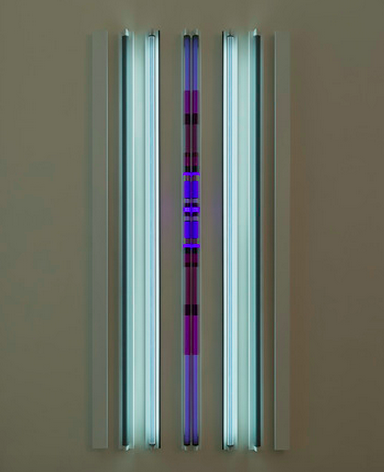 Consisting of only 8 works, Irwin’s new exhibition wastes no time in presenting its surfaces to the viewer, brightly lit rows of fluorescent light tubes, each died in a variety of bright hues, and spaced meticulously to blend the shining colors from row to row.  But where past iterations of Irwin’s work in this format have explicitly worked with color as a direct medium for light, the pieces here take a more material bent.  Many of the fluorescents used in the works are actually left turned off, giving an even deeper series of variations across the surface of the work.  In each, the works are coy in their materials described on the exhibition checklist: Color+Light+Shadow+Reflection, a point that underscores Irwin’s move away from the mere consideration of light as the communicating agent. 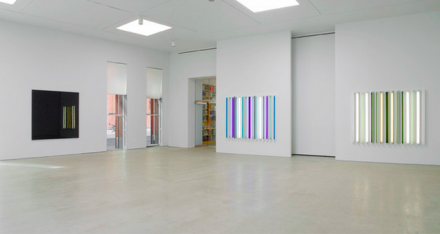 Instead, Irwin seems interested in a paradoxical exploration of each state possible for his chosen method of operation.  Deeply opaque lights play off adjacent bright tubes, while others are completely turned off.  In other works, varying tube lengths in different colors and shades create an intersection of the technological and purely aesthetic, a space where the intersection of practical pieces like mounting brackets, lines of tape and overlapping braces on each piece become geometric elements in the piece on their own.  This variation is further exploited by the gentle shifts in interior lighting from the skylights above.  As the sun is buried behind clouds or shines directly through into the space, the works move from a dull shimmer to a rich, deep glow, allowing Irwin’s piece to sit in a strange point between interior and exterior space. 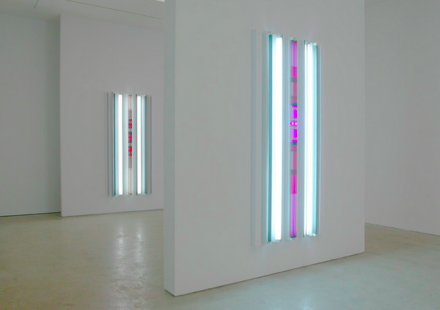 Extended viewing of these works creates an effect of almost hallucinatory awareness, as differentiation in pattern, brightness and color from tube to tube (and work to work), allow any number of new patterns of seeing to emerge.  Much akin to his peer James Turrell, Irwin’s work places the act of seeing itself at the forefront, and allows the viewer to generate their own narrative arcs to the gently glowing arrangements on view.

Cacophonous is on view through May 9th. 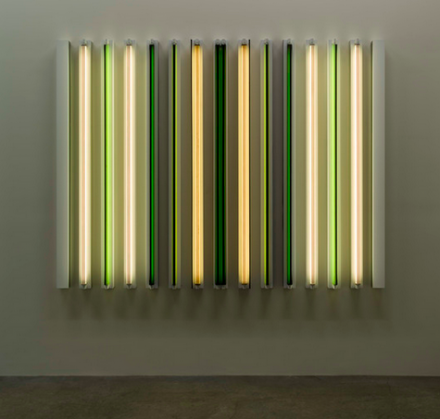 This entry was posted on Monday, May 4th, 2015 at 1:00 am and is filed under Art News, Featured Post, Show. You can follow any responses to this entry through the RSS 2.0 feed. You can leave a response, or trackback from your own site.