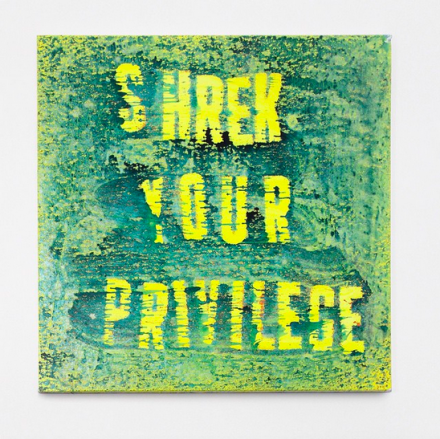 For years, Mark Flood has mined a specific aspect of the artistic vocabulary when it comes to pop culture, a sort of irreverent mirror that plays the often cloying imagery of advertising, corporate branding, and the Hollywood star machine against itself, often performed against the backdrop of more formally-oriented paintings and text-based works, a combination of styles that spreads the artist across a spectrum that seems to mix commentary with composition in any number of permutations. 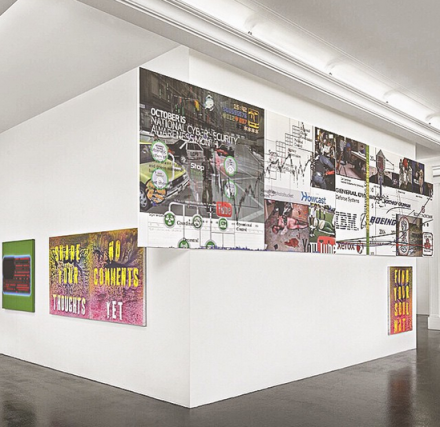 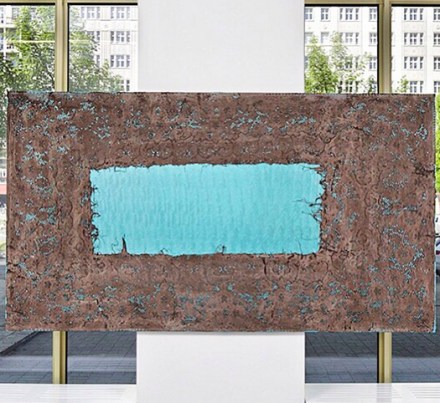 “I try to avoid making new propaganda, because it becomes next year’s model,” Flood says. The artist is currently presenting new work at Peres Projects in Berlin, combining a number of previous bodies of work with new approaches to his own brand of cultural critique. The show prominently features some of Flood’s most recent pieces in his Aged Paintings series, this time pulling prominently from both non-profit health organizations and logos signifying the new “green economy,” icons implying environmentally safe products and consumer goods. For Flood, these logos, with all of their munificent implications of bodily and planetary health, are as much fair game for examination as any other corporation. 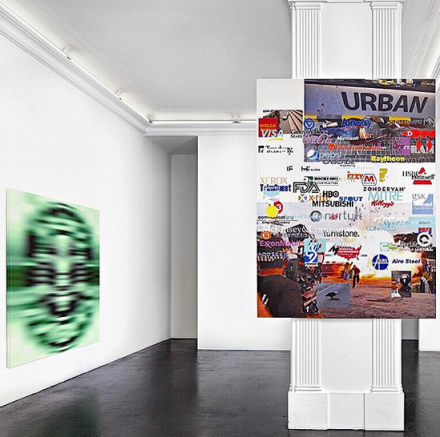 “I’m skeptical of the corporate form and the non-profit form,” he says. “I’m not necessarily skeptical of the people animating those forms.” Accordingly, his logos stand alone on the canvas, cracked and weathered in a reflection of their impermanent nature, even as an icon of a faceless corporation, a notion he extends to the art world proper: “Green was edgy in the 50s. Now it has becoming the slogan of the Fortune 500. Maybe reflecting the process of green imagery being co-opted by the death machine is appropriate for contemporary art?” 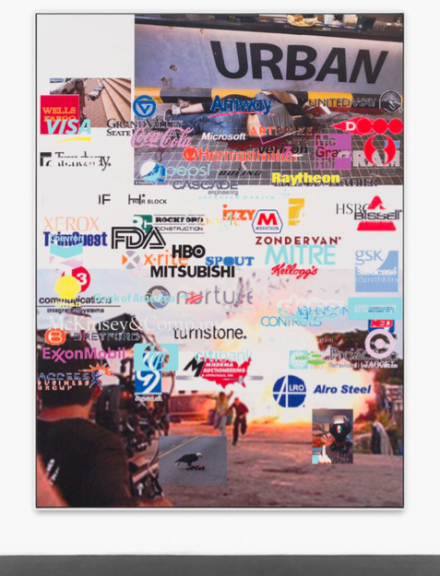 But it’s his new Viral Paintings series that stands out here, a cluster of images pulled from online that combine harsh violence and corporate iconography, ongoing themes in Flood’s work that he calls “monuments” to the viewer’s experience online. Pulling from chance operations, the pieces create strange clusters of meaning from the images exhibited.

“I’ve never got over a group show by John Cage, ROLYWHOLYOVER A CIRCUS, where the selection of the work and where each work went in the exhibit, was determined by chance,” he says. “A computer programmed everything and spit out new directions every half hour or so. Pieces constantly moved up, down, along the walls, forming and dissolving interesting groupings.” Flood uses a similar approach here, turning his works to mirror clustered, often haphazard experience of the browser window, one he ties back to the history of collage and Rauschenberg’s silkscreen paintings. 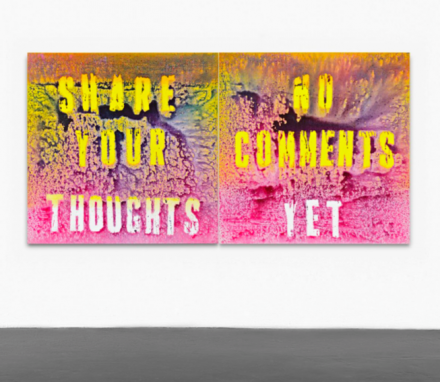 The show, as a result, carries a similar aleatory experience for the viewer. Moving from his Viral Paintings through to other works in the exhibition, Flood’s voice, at times caustic, at times sardonic, runs through a broad range of subjects and focal points, from the impressive surfaces of his Everglade Trench to his text based paintings, including one that reads Shrek Your Privilege. Throughout, the work challenges the permanence so often implied by the mouthpieces of mass media.

“Reality is always up for grabs,” says Flood. “Things that seem permanent will fade.” 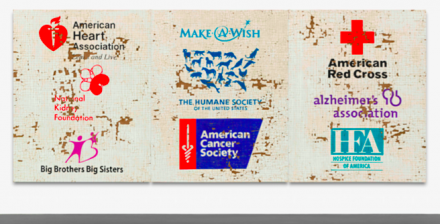 This entry was posted on Wednesday, June 10th, 2015 at 1:25 pm and is filed under Art News, Featured Post, Show. You can follow any responses to this entry through the RSS 2.0 feed. You can leave a response, or trackback from your own site.