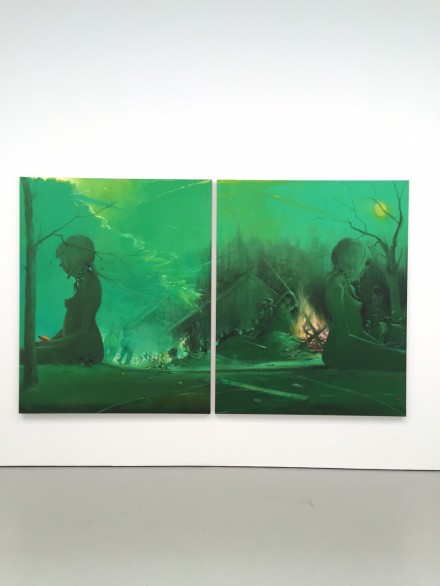 Lisa Yuskavage, Bonfire (2013-2015), all images via Osman Can Yerebakan for Art Observed

In her fourth solo show with David Zwirner, Lisa Yuskavage furthers her now-signature style as a figurative painter, while moving towards new territories in both content and technique.  At the center of the show is Bonfire, a large diptych strikingly positioned facing the gallery entrance, and capturing the gaze of onlookers and passerby with its profound green tones and accentuated, yet oblique narrative.  Situated on opposite sides of the painting are two female nudes, sporting Yuskavage’s recognizable stylistic features, such as bulging abdomens and voluminous hair.

Far from the peculiar chaos depicted on the background, Yuskavage’s two figures contrast and complement each other almost simultaneously, suggesting various readings in regards to a possible plot.  Known for her juxtapositions of females bearing an ethereal strength, the work challenges their otherwise fragile and meek demeanors, and introduces another layer to dream-like states the painting conveys, with an eerie tone of green that is veiling both the canvas and the story. 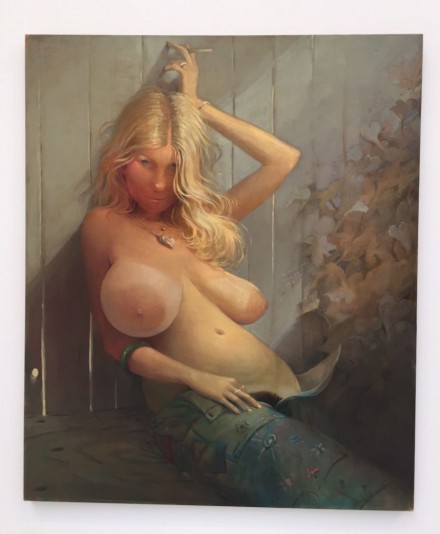 Yuskavage, a foremost member of New York’s return to figurative painting in the 1980’s, has consistently delivered resolute statements on femininity and the female body.  With their voluptuous forms, often encompassing both a Lolita-esque innocence and mature fortitude, Yuskavage’s women of disproportioned, surreal beauty channel the long history of ideal beauty, from Parmigianino to Fragonard, to contemporaries like John Currin.  Amidst mostly male painters creating female nudes, her depictions complicate set dynamics on voyeuristic gaze, ridiculing the common notions of the muse for both the male and female painter. 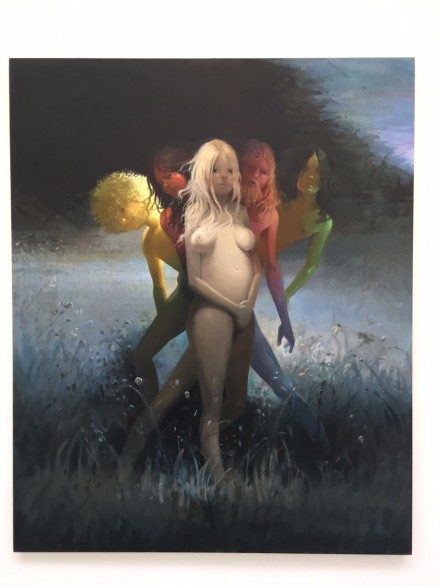 Hippies, another central painting within the show, vividly underlines Yuskavage’s expansion to new territories in her subject matter.  Four male figures, each in different color schemes, bloom from both sides of a pale girl in front of a densely grey background, giving slight impressions of a farm or wild nature.  Revolutionary for the artist’s oeuvre is her introduction of male figures into her repertoire for this show, signaling a broader interest in the human form beyond her traditionally female subjects. 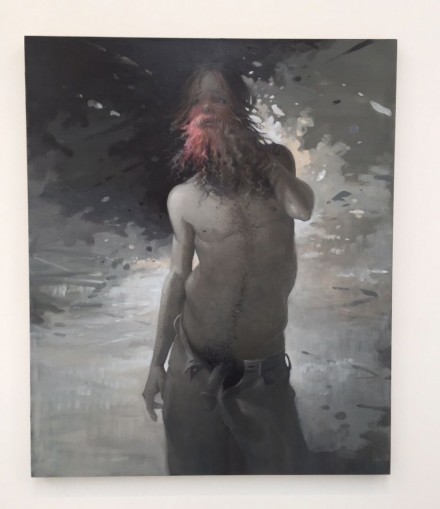 Appearing in warm tones of red and yellow in contrast to the central female figure, often rendered in cangiantismo (a Renaissance era technique in which unworldly figures such as saints are depicted in unnatural colors) Yuskavage’s men maintain familiar features for the artist’s work, with their hazy expressions and floating postures.  Dude Looks Like Jesus and Dude of Sorrows also put men in central roles, yet satirize conventional male depictions in history of art with sarcastic titles, feminized features and, in one work, even a swollen eye.

Lisa Yuskavage is on view at David Zwirner through June 13, 2015. 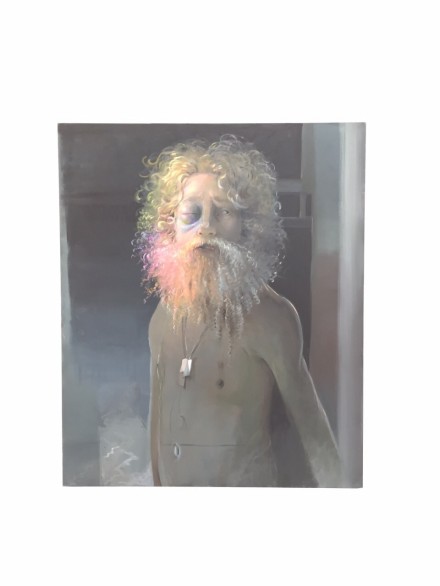 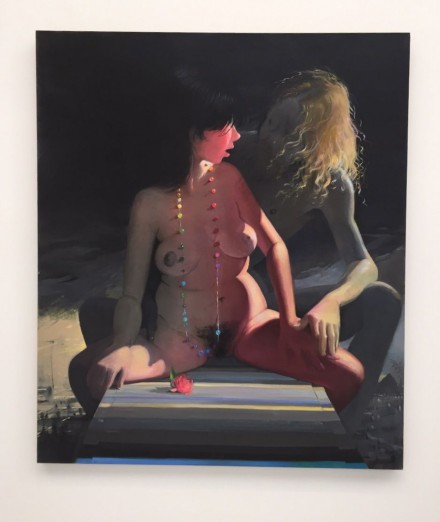 This entry was posted on Wednesday, June 10th, 2015 at 9:24 am and is filed under Art News, Featured Post, Show. You can follow any responses to this entry through the RSS 2.0 feed. You can leave a response, or trackback from your own site.