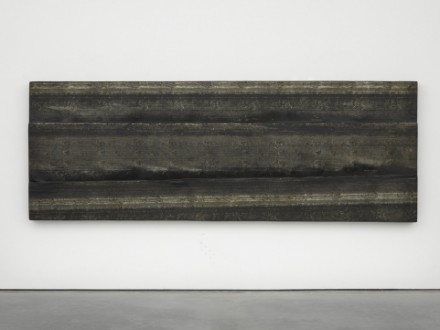 Now through July 5, the White Cube Gallery in Bermondsey presents an exhibition of new work by Theaster Gates, the installation artist and professor of visual art at the University of Chicago who draws from themes of individual and collective history, place and self, and empowerment in his work.  Freedom of Assembly continues and expands upon the artist’s approach to art as a vehicle for social-justice, communication, and critique. 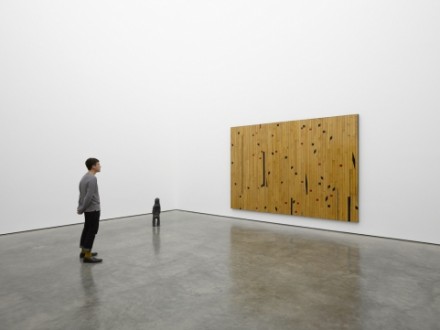 Taking its title from the First Amendment of the United States’ Constitution, the show references and riffs on the potential for autonomy, freedom, and collective action at a national and global scale.  New pieces include a series of large-scale tar paintings, sculptures, and clay figures, the composition of which stems from repurposed or reassembled materials taken from familiar establishments or found in and around the artist’s own neighborhood in the South Side of Chicago.  Material from a closed-down hardware store that served as a community cornerstone is used in the composition of a series of wood vitrines, for example, and the lacquered wood of a high school gymnasium floor appears re-assembled in the series Ground Rules. 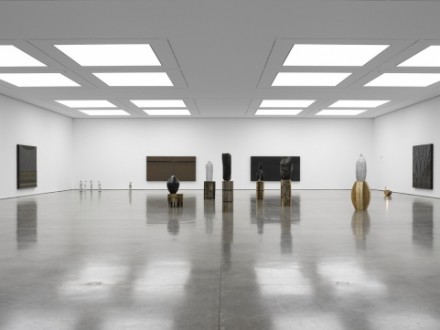 One of the more successful series of works in this exhibition carries a particularly charged political and aesthetic impact: a series of large-scale tar paintings and tar-covered objects produced over the past year, suggestive of the personal and collective stakes of this work and the artist’s investment in exposing the current conditions and obscured history of Black America, especially in his native Chicago. These tar paintings present an unrelenting but contained force, neatly held within the frame of the canvas, while casting a reflection off of the polished floor of the gallery. The clay objects and tar-covered figures (such as Tarred Vessel, 2015) included in the exhibition evoke the same sense of burden or heaviness, evoking the frustrated social stagnation of race and class relations in the United States. 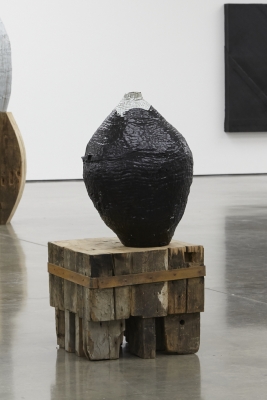 In constructing these objects, Gates engages with the formal procedures of roofing, working with tar, rubber, and wooden tiles, incorporating his own personal history (his father was a roofer) while linking to a more collective community engagement through his art production, prompting reflection on the relationship between labor and art and the institutions or spaces that delineate the boundaries of each. White Sky, overcast (2014), conversely, reads as an overwhelming mass of visual information, while channeling the effect of the unrelentingly individual experience of both producing and engaging with a piece of art.

The use of repurposed material from abandoned or local spaces, especially ones intimately known and often no longer in existence, forms an interesting dialogue with the repeating motif of the empty vessel, seen in Gates’ clay productions.  This exhibition plays on themes of loss and inheritance, as well as beauty in excess or the aesthetic potential in a multitude of material. 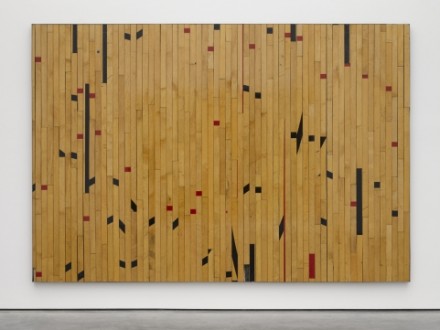 Freedom of Assembly resonates as a comprehensive establishment of the relationship between Gates’ ideological and aesthetic interests.  The works in this exhibition reflect an expert arrangement of work that subtly and forcefully to communicates the power of the ideals of autonomy, freedom, and community.

This entry was posted on Thursday, July 2nd, 2015 at 12:00 am and is filed under Art News, Featured Post, Show. You can follow any responses to this entry through the RSS 2.0 feed. You can leave a response, or trackback from your own site.