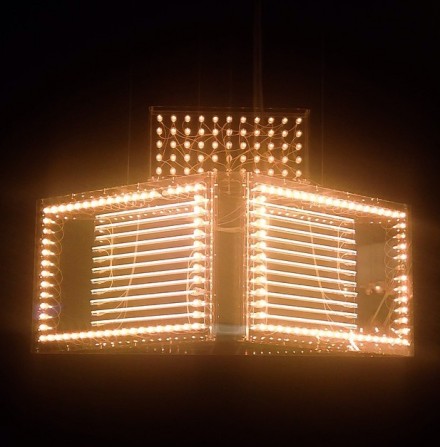 The Park Avenue Armory has opened its doors this summer to Paris-based artist Philippe Parreno’s largest U.S. installation to date, H {N)Y P N(Y} OSIS, a symphony of events unfolding in scripted and random sequences that constantly blend and transform in shape and context, tuning the entire space as a series of interlocking events.  Sharing authorship, Parreno avidly collaborates with performance artist Tino Sehgal, artist Pierre Hughye and pianist Mikhail Ruby, giving Parreno the role of both artist and director. 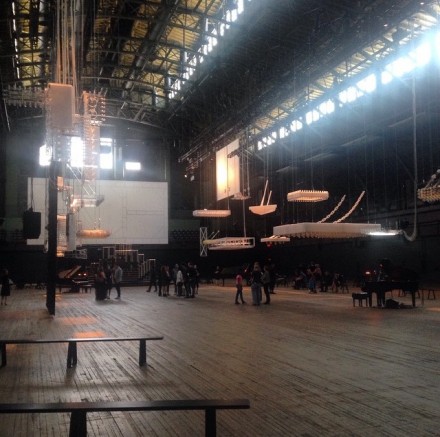 As a full piece, H{N}Y P N{Y} OSIS consists of three projection works, a suspended LED screen, 30 light sculptures, a set of revolving bleachers and self-playing pianos, all synchronized into a multi layered symphony of light, sound, film and performance.  Scattered around the space, or on a set of revolving bleachers, viewers are immersed in the colorful, moving space and encouraged to customize their sensory engagement by shifting from seat to seat.

At the core of the work are 28 of the artist’s marquee sculptures, made between 2006 and 2015, and displayed here in parallel lines to create a street titled Danny La Rue.  Modeled after vintage American film theaters, Parreno evokes a glamorous era of film and entertainment, an ongoing interest in his work, particularly examining the role a title takes as a full spectacle in and of itself.  In an effort to transform the exhibition into a spectacle, these title-less marquees continue to entice viewers with unique structuring and timeless characteristics as they switch on and off in randomized sequences. 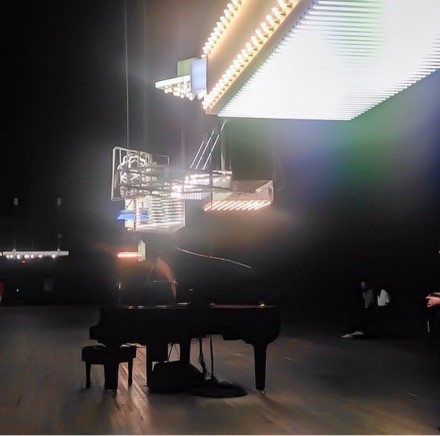 To contrast the classic movie atmosphere, Parreno delivers on more unique movie watching experiences, directing viewers to gather around films that start without any notice.  Screenings of Invisibleboy (2009), 1968 (2000), Marylin (2012), The Crowd (2015) and Anywhere out of the World (2009) play on drop-down projection screens at the end of the  Park Avenue Armory’s Grand Hall, surrounding the work Bleacher (2015), a constantly revolving bleacher that only stops for movie presentations. 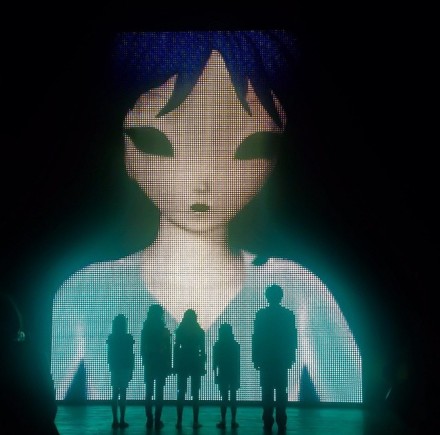 Incorporated into the experience is a  performance by Tino Sehgal entitled AnnLee that involves child actors actively engaging with viewers, introducing themselves as an Anime character named AnnLee.  Actresses present monologues that consist of AnnLee’s life story and what it feels like to be a piece of art.  The performance comes to a surreal point of synergy with AnnLee herself appearing on one of the screens in the space, delivering her story to viewers in her own words as well.   The character, originally purchased from a stock character corporationg by Pierre Huyghe and Parreno, and then loaned to other artists for use, is something of a shell, an open framework that further confounds a singular reading of the installation and its authorship. 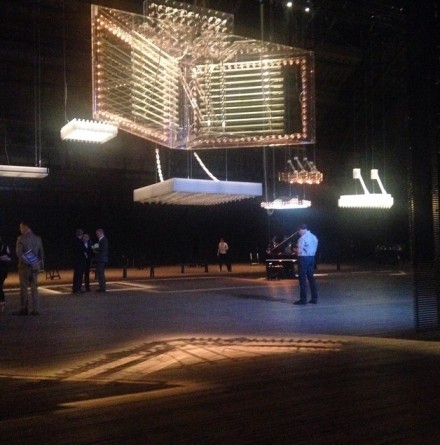 Simultaneously with these pieces, recitals by Mikhal Rudy add an extra layer of familiarity, playing throughout performances and movie presentations, and bringing a vintage, somewhat nostalgic sonic element to the experience.

This entry was posted on Sunday, July 5th, 2015 at 12:00 am and is filed under Art News, Featured Post, Show. You can follow any responses to this entry through the RSS 2.0 feed. You can leave a response, or trackback from your own site.