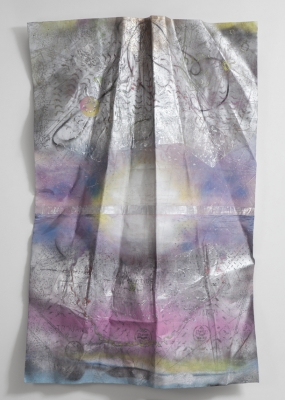 Artist Marc Quinn returns to his beloved shoreline for a new exhibition of works at White Cube this month, a continuation of the artist’s ongoing interest with the motion and resulting detritus that defines patterns of water, flow, and humanity’s relationships with these fluid forces. 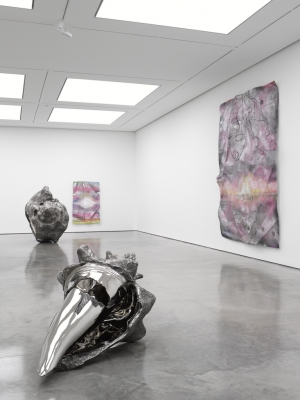 Like much of Quinn’s work, the pieces are defined by a certain delicacy of motion, often characterized by a single point of flux or force that ultimately renders the work in final form.  Less immediately apparent is the dense work of degradation and and transference that the works seem to have undergone, a complex process that sees Quinn taking photographs of picturesque sunsets, and sanding them down, covering parts of the surface with spray-painted driftwood reliefs and impressions of manhole covers, sewer grates, and other symbols of controlled water flow in an urban landscape. 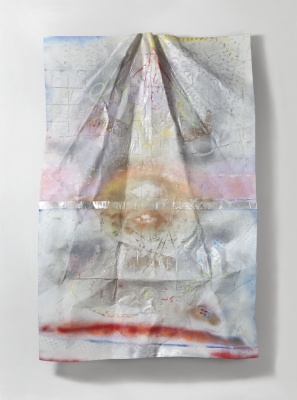 It’s this complexity that seems to run as an undercurrent in much of Quinn’s work, a process that emphasizes a single, unified principle, often obscuring the dense layers of work put into each piece.  For The Toxic Sublime, even with such brashly rendered final products, a certain restraint of concept seems to temper these pieces.  The work’s execution, as presented here, follows a single line of thought, tracing water gradually up from the shoreline (and even, to some degree, symbolically from the celestial) up across the beach and into the waterways of modern civilization.  The degradation practiced here echoes the continued abstraction of water itself, from a bodily mass composing the majority of earth’s surface, through to a purely utilitarian force, one sustaining life and carrying waste away from humanity.  Much like water itself, Quinn’s work seeks a middle ground, a representation of the space between man and nature as mediated by his chosen subject. 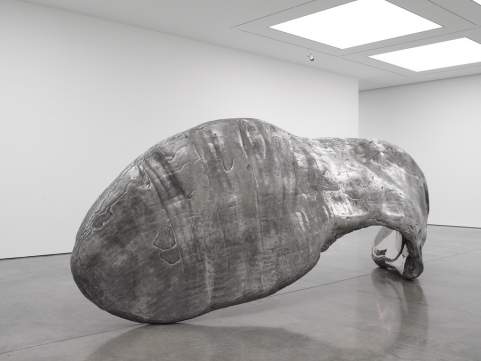 Continuing in his philosophical thread, and perhaps acting as a crystallization of his thought in the exhibition, are a series of massive, stainless steel sculptures, scaled-up casts of shells that have been eroded by the ocean waves.  Showing both momentary scratches and dents caused by collision with these ocean forces, and the long, elegant lines caused by wave erosion, the works feel a fitting counterpoint to Quinn’s violent battery of his wall-mounted works.

Tracing the movement of the waves against the needs and structures of modernity, The Toxic Sublime is on view through September 13th. 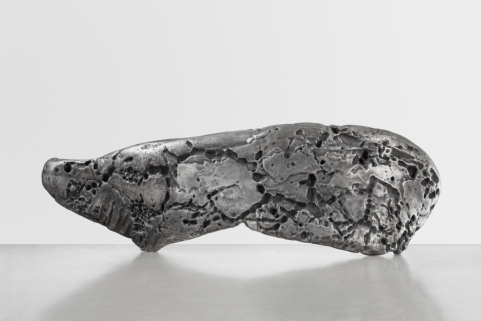 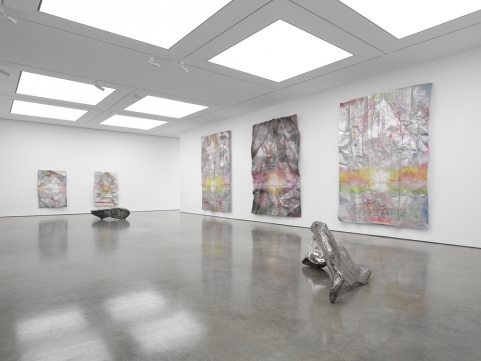 This entry was posted on Thursday, August 27th, 2015 at 12:23 am and is filed under Art News, Featured Post, Show. You can follow any responses to this entry through the RSS 2.0 feed. You can leave a response, or trackback from your own site.