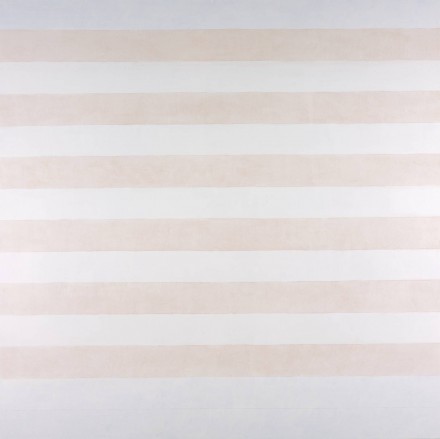 The Tate Modern is currently hosting the first retrospective of Agnes Martin in twenty years on view through October 11th. The exhibition, planned to visit the Guggenheim in 2016, spans the versatile and extensive career of the artist, who remained loyal to her distinct pattern over many decades, while discovering and inventing new paths within a deliberately spare vocabulary. 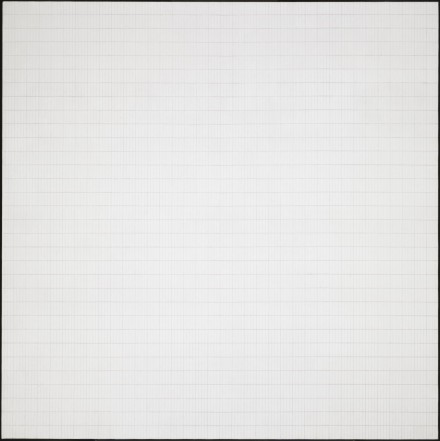 Born in Canada to farmer parents in 1912, Martin moved to the United States at an early age to study fine arts.  After fifteen years struggling in the booming landscapes of Abstract Expressionism and Modernism, Martin moved her studio, upon advice of her dealer Betty Parsons, to Coenties Slip in downtown New York, where she was accompanied by a new and influential group of peers, including Ellsworth Kelly, Robert Rauschenberg and Jasper Johns.

Surrounded by such a group of colleagues pushing towards a new stage in New York’s breakthrough as the world capital of modern art, Martin produced her first sets of grid paintings, minimal canvases that are today considered as a basis for the horizontal abstractions and flourishes of color that would follow in later decades. Transferring a tremendous serenity nestled among geometrically perfect grids, Martin created her perfection-obsessed paintings until the late 1960’s, when she left her studio and her career in New York for a long hiatus, during which she disconnected herself from the restraints and trappings of the city and its burgeoning arts scene. 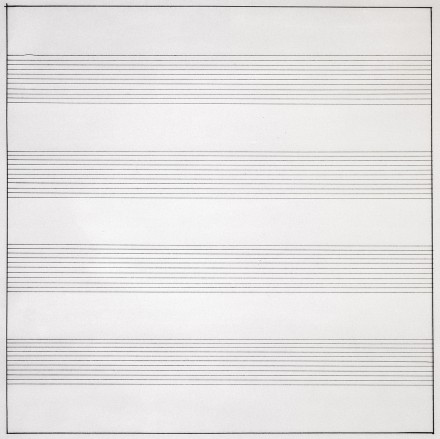 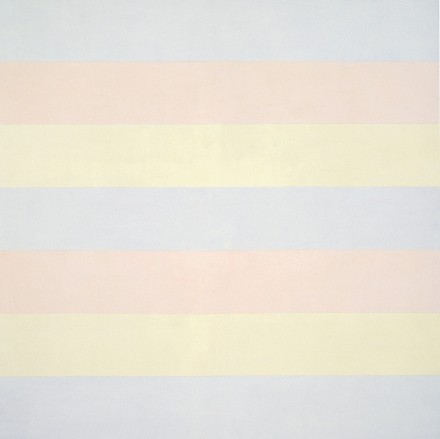 When Martin made her reappearance almost a decade later, it was from a secluded ranch New Mexico, to where she many times stated she felt more grounded than anywhere else.  By this time, her grid paintings had developed into vaporous horizons that were equally serene, mysterious and complex in narrative. Stripped from accentuated brushstrokes of bold tones or excessive austerity of minimalism, Martin harvested a unique voice that remained faithful to complex dynamic of colors in her unorthodox way.  Taking a mystical and often tight-lipped view of her creative process, Martin would often spend weeks without painting, until a formal concept appeared to her as if in a vision, fully formed, which she would quickly translate to canvas.

In Martin’s paintings of these linear forms, pastel colors in off-balance tones slowly entice the viewers, while their timeless bearings free them from historical or methodical classification. Undeniable manual precision dominates her canvases, however, and the unpredictability of her repetitious pertinence beam throughout the galleries of Tate Modern, once again reminding museum goers her artistic brilliance and mediative language.

Martin kept producing new work until her passing in 2004 at the age of 92.  Her exhibition is on view at Tate Modern through October 11, 2015. 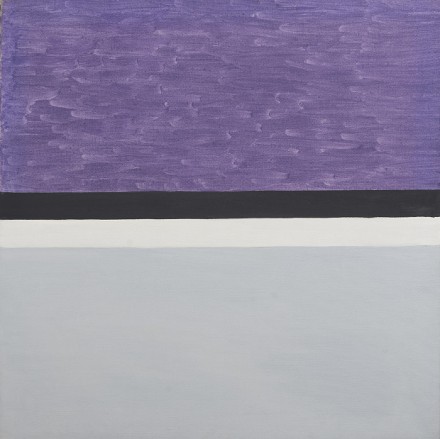 *All images © the Estate of Agnes Martin

This entry was posted on Tuesday, September 8th, 2015 at 3:07 pm and is filed under Art News, Featured Post, Show. You can follow any responses to this entry through the RSS 2.0 feed. You can leave a response, or trackback from your own site.