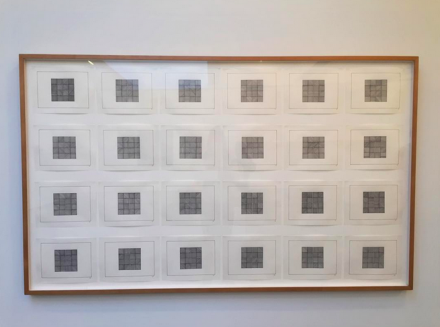 In 1968, a group of artists interested in the material limits of art practice, and the interrelations between text, language and action launched The Xerox Book, a published art book culling contributions from Carl Andre, Robert Barry, Douglas Huebler, Joseph Kosuth, Sol LeWitt, Robert Morris, and Lawrence Weiner to be printed and copied as an easily distributed art work.  Presented at Paula Cooper’s 21st Street Location in New York, The Xerox Book is a return to this landmark publication, incorporating a series of works and objects drawn from or inspired by each artist’s contributions. 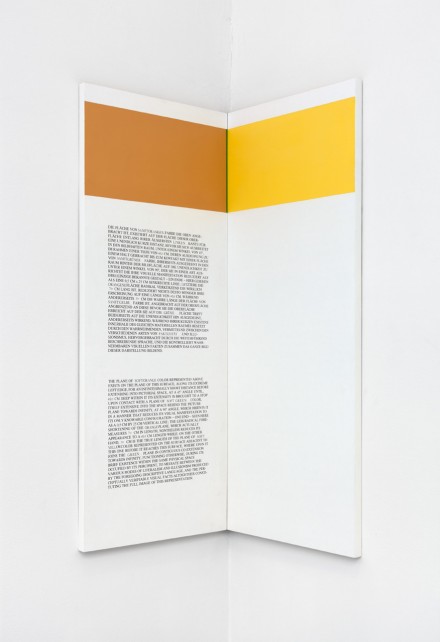 Published by Seth Siegelaub and Jack Wendler, the work was an early entry in the modern formats of art book printing and artist-published ‘zines, and comes at a fitting time of the year, just as the Printed Matter New York Art Book fair has come and gone.  The works on view, however, have sprung forth from the pages, adorning the gallery walls with their own interpretations of printed and mass-produced concepts of production.  Of particular import is A SERIES OF STAKES SET IN THE GROUND AT REGULAR INTERVALS TO FORM A RECTANGLE—TWINE STRUNG FROM STAKE TO STAKE TO DEMARK A GRID—A RECTANGLE REMOVED FROM THIS RECTANGLE (1968), the first catalogued wall text piece Weiner ever executed.  It was this same work, originally installed outside, that inspired Weiner to further embrace text, and even the spoken word itself, as the primary conveyance of his art. 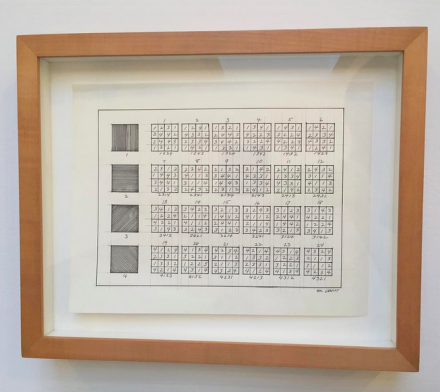 It’s an interesting point to consider the methods of distribution at play here, noting a distinct movement away from object-centered work in favor of specific focuses on language and conveyance.  Particularly, a focus on memetic properties for art can be distinctly felt, exploring notions of the image’s spread as a formal signifier, occasionally held back from actual material existence.  Considering the current state of image and text dissemination through online media, one can feel a lineage drawn through the show that underscores modernity not as a new form of information access, but merely the same one at a far-greater speed. 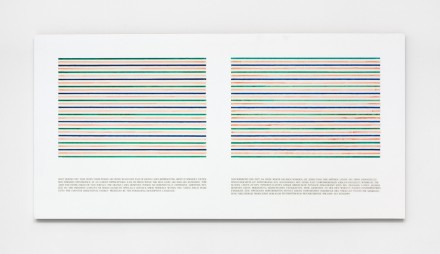 Conversely, the physical presence of these objects in the gallery space offers a peculiar counterpoint to the themes discussed previously, as if fifty years of circulation, primarily as images, has finally realized a concretized format of the book, now that its historical validity has been emphasized.  In quite a real sense, the works here have become actualized within the art establishment, realized after years of populist circulation in abstract.

The Xerox Book is on view through October 24th.

This entry was posted on Monday, October 12th, 2015 at 12:00 am and is filed under Art News, Featured Post, Show. You can follow any responses to this entry through the RSS 2.0 feed. You can leave a response, or trackback from your own site.