The Philosophy of Andy Warhol (From A to B and Back Again)
(Andy Warhol, 1977)
Read More and Buy↠
Home » AO Auction Results – New York: Christie’s “The Artist’s Muse” Curated Sale, November 9th, 2015

Dashing through a 34-lot auction in style, Christie’s has entered the November auction week in impressive style, bringing a flurry of sales during its curated “The Artist’s Muse” auction tonight that saw several world records fall, and achieved an impressive tally of over $491 million for the evening, especially considering the 10 lots that failed to sell.

The sale began quickly, as Pablo Picasso’s Le Peintre et Son Modèle shot out quickly to meet its $1.2 million low estimate for a final of $1,685,000.  A Kirchner sculpture soundly beat estimate one lot later, rising to a final of $8,005,000.  Another Kirchner followed, and performed similarly well, reaching a $13,605,000 final.  Two lots later, the first of the evening’s Paul Gauguin’s reached its $25 million high estimate quickly, ultimately selling for a final of $30,965,000.  Another Gauguin followed close behind, reaching a final of $13,605,000, before the evening’s star lot, Modigliani’s glowing nude, blew out of the gate, surging past $125 million on only a few bids, and ultimately reached a final price of $170,405,000, placing it only second to Picasso for the world’s most expensive auction price. 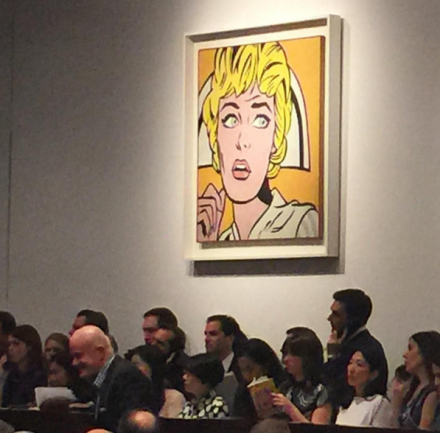 The sale moved briskly following the Modigliani fireworks, as a Courbet sold quickly within estimate for $15,285,000, and Roy Lichtenstein’s stand-out Nurse met expectations, rising quickly past $80 million to hit a final of $95,365,000, and a Giacometti followed quickly, reaching a $7,445,000 final.  A Willem de Kooning failed to sell in the next lot, missing its $14 million low estimate.  Another top lot, the Lucian Freud nude, also failed to sell several lots later.  It took a Balthus work in the next lot to break the streak, setting a world record for the artist at $9,909,000.

Another Alberto Giacometti followed back, but sold shy of the low estimate for $20,885,000, with a bold, red Pablo Picasso following close behind at $22,565,000.  A similarly stark Warhol followed after, bringing a $11,925,000 final, within estimate.  Another record came several lots later, as Yoshitomo Nara’s Little Star Dweller reached $3,413,000.

A long string of lots passed late in the sale, including a Picasso portrait and a pair of Fernand Légers, as well as a high-priced Giacometti and one of Lichtenstein’s drawings, before concluding with a set of Chuck Close paintings, one of which also passed, as did the final lot of the evening, a clustered Christopher Wool. 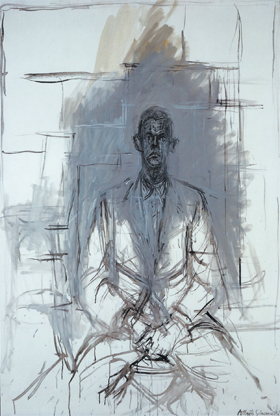 It’s worth noting that most of the sale’s highest lots, including the record-shattering Lichtenstein and Modigliani, boasted third party guarantees, a point that underscores Christie’s increasingly aggressive stance as it continues to post record-breaking auction figures.

This entry was posted on Tuesday, November 10th, 2015 at 3:09 pm and is filed under Art News, Auction Results, Featured Post. You can follow any responses to this entry through the RSS 2.0 feed. You can leave a response, or trackback from your own site.